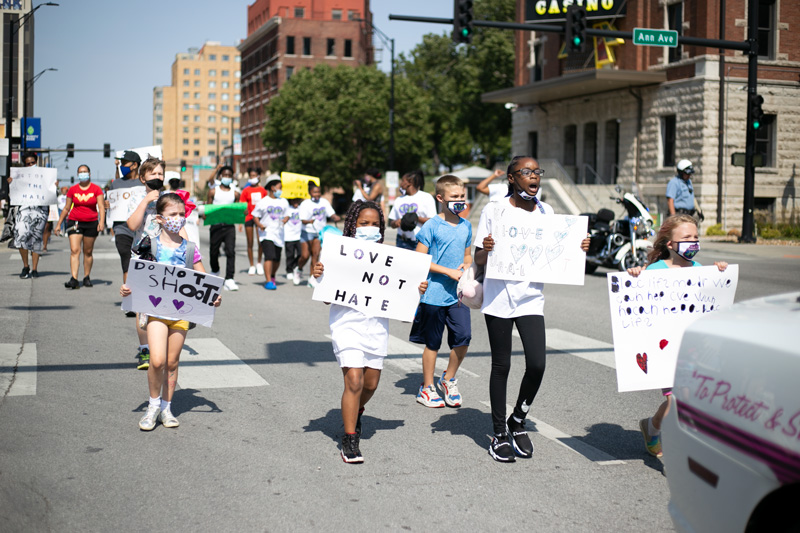 At 11 years old, Nevaeh Thomas (front, third from left in black pants) of Kansas City, Kansas, led a march and rally against hate and racism on Saturday in downtown KCK. The demonstration comes nearly a month after Thomas was victim to a suspected racially motivated attack in Shawnee.

Nearly a month after Nevaeh Thomas, an 11-year-old Black girl, was attacked by a white boy in Shawnee, she led a march and rally for children her age to protest against hate and racism.

About 75 protesters, mostly comprised of families with young children, joined the Kids Against Hate Unity Walk & Rally on Saturday afternoon in downtown Kansas City, Kansas. Police officers with the Kansas City, Kansas, Police Department escorted protesters as they walked down the busy 7th Street thoroughfare. Demonstrators ultimately gathered in front of Memorial Hall in support of Thomas and her family.

“Love comes naturally, not hate, so with that being said, let’s teach our kids right, not wrong,” Thomas told the crowd over a loud speaker.

Thomas was attacked on Aug. 28 at an apartment complex near Nieman Elementary. A 12-year-old boy allegedly hit Thomas in the head with a metal pole, knocking her unconscious, splitting open her cheek and giving her a concussion. Thomas’ family say they suspect the attack was racially motivated, though the Shawnee Police Department determined in its incident report that the boy had no motivations of hate or bias.

The Johnson County District Attorney’s Office has confirmed to the Post that the boy is charged with aggravated battery, a felony and is currently on house arrest.

Calls for justice — “whatever it takes”

Nevaeh led the march of children and parents, shouting chants like: “Kids against hate, kids against racism,” “Black lives matter,” “Justice for Nevaeh, justice for our kids” and, “No justice, no peace.”

Kendra Dean-Martin, Thomas’ grandmother, said she understood racism and talked about her experience with workplace harassment.

“When we are dealing with racism, every company, every place of employment, anyone that’s promoting racism needs to be dealt with right away, not given a warning,” Dean-Martin said. “It’s time now for reprimanding people for their actions and standing firm on that. Black lives do matter.”

Pastor Terry Bradshaw of Empowerment Temple, the family’s church in KCK, said hatred, racism and bigotry “have no place in this country… in our schools… in our homes… in our churches… no place at all in the earth.”

As part of the rally, Delynia Jannell, a Kansas City vocalist, presented a medallion for Thomas and special video messages from Kansas City-area rapper Tech N9ne and his record label Strange Music, to demonstrate their support and solidarity for her.

The Shawnee boy’s juvenile case has a hearing set for October in Johnson County District Court. Bradshaw said he and the family are doing “whatever it takes” to get justice for Nevaeh Thomas.

“You can touch me, but when you touch our Black children, when you come against our children, we will do whatever it takes to demand justice,” Bradshaw added. “When are we going to stop acting as if racism does not exist when the truth is if you are Black or brown, you live with it every single day. I’m tired.” 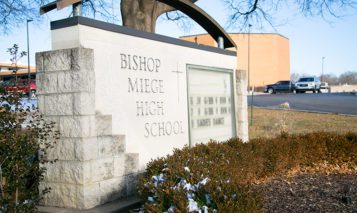