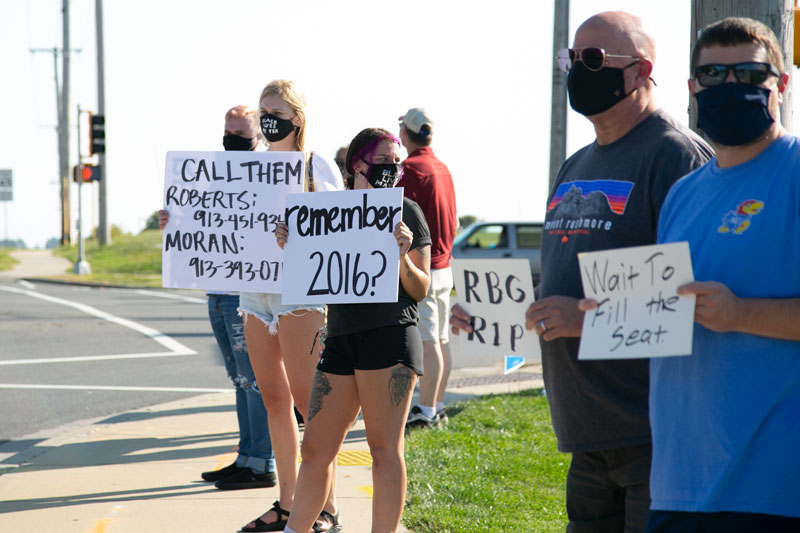 Organizer Caitie McNulty, center, and protesters gather in front of Sen. Pat Roberts' office at 11900 College Boulevard, to call on him and Sen. Jerry Moran to delay a Supreme Court Justice appointment.

Nearly 40 protesters stood outside of Sen. Pat Roberts’ office over a two-day period to call on him and Sen. Jerry Moran to delay the Trump administration’s Supreme Court Justice nomination following the death of Ruth Bader Ginsburg.

Indivisible KC, a volunteer-based organization encouraging the public to actively engage in civics by voting and contacting representatives, led the Friday and Saturday afternoon protests. Organizer Caitie McNulty encouraged the Friday crowd of around 25 people to call their senators to express disagreement with appointing Amy Coney Barrett, the president’s nominee, to the Supreme Court ahead of the general election.

“If we had Amy Coney Barrett in our Supreme Court, we will have a 6 to 3 conservative republican supermajority — a two-thirds majority in the Supreme Court — that means virtually any progressive movement that hits the Supreme Court is going to die,” McNulty said.

McNulty encouraged contacting senators until they listen to constituents on this issue. Jae Moyer, a LGBTQ+ activist who spoke Friday, said Johnson Countians could turn Kansas from a red state to a blue state by voting in one Democratic state representative.

Hundreds cruise through KCMO in support of Trump

Hundreds of vehicles drove through Kansas City, Missouri, as part of a “truck rally” in support of President Donald Trump’s reelection campaign. The rally took place Saturday at Kansas City’s Liberty Memorial, with rows of cars, trucks and motorcycles decked out in red, white and blue, and people waving flags and wearing clothing emblazoned with pro-Trump slogans.

There was no official count of attendees as of early Saturday evening, though some estimated it was more than 1,000 people. [Hundreds of Trump supporters cruise through Kansas City, calling for ‘4 more years’  — KCUR]

The Westwood Police Department will receive $75,956 that covers radio equipment purchases for maintaining interoperability. The grant is part of the Federal Edward J. Byrne Memorial Justice Assistance Grant Program and was awarded by the Kansas Criminal Justice Coordinating Council. Schmidt serves as the chair of the council, according to a press release.