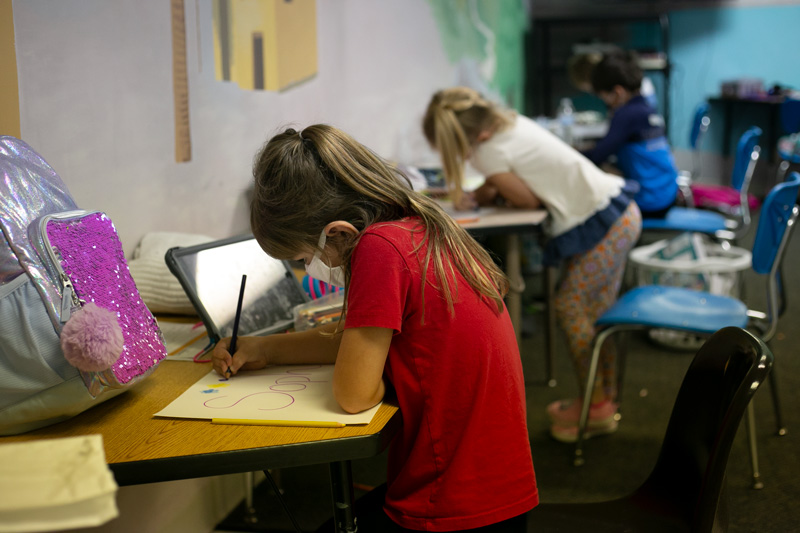 Citing the unique and evolving circumstances of remote education this school year, Shawnee city staff is developing city code to address learning centers in the city. Above, a file photo of a learning center in Prairie Village.

Shawnee is developing city code to regulate remote learning centers within the city.

The move has been prompted by the recent increase in virtual learning centers set up for children at the start of a school year that has seen tens of thousands of students across Johnson County thrust into remote learning settings amid the COVID-19 pandemic.

City staff is drafting text amendments to Chapter 17 of the city code, which addresses how daycares, businesses and pop-up learning centers can facilitate remote education for students.

In addition, following an inquiry about a potential homeless shelter, Shawnee city staff is also developing code to address where and how homeless shelters can operate within city limits.

The Shawnee Planning Commission on Monday voted 10-0 to authorize city staff to begin the process of researching and drafting city codes to address these two items. Commissioner Bruce Bienhoff was absent.

The planning commission will conduct a workshop Oct. 5 and a public hearing Oct. 19 on the items. The city may continue the public hearing if either of the items merits further discussion before ratifying the new code.

‘A need that can’t necessarily wait’

Malmborg said staff hopes to move fairly quickly on this item, considering the evolving and unique circumstances of students during the COVID-19 pandemic.

“In the meantime, for learning centers, we do have an administrative policy that we’ve been working with because we understand that this is a need that can’t necessarily wait for a text amendment to help kids do their schoolwork,” Malmborg said.

Planning commissioners sounded generally supportive of adding the changes to the city code.

Commissioner Kathy Peterson said she was concerned the scope of learning centers was too broad to write into city code.

“I also think that this is something that is not going to be long term; I’m not saying it’s not going to be here for six months, nine months, a year, maybe even two years, but at some point in time, schools will be able to open up and then we have this random, very specific situation on our books,” Peterson said.

“Do we actually need a text amendment? I’m just perplexed why we’re going to spend an awful lot of staff’s time trying to figure out this.”

The city currently regulates daycares and businesses but doesn’t address regulations for guided instruction and tutoring programs, Malmborg said. However, considering the growth of learning centers in the metro area in recent months, city staff want clarification on how to treat them.

“This is an ever-changing situation with COVID and the way that kids are going to school and the way that they’re learning,” Malmborg said. “So it may or may not end up being a big deal adding this to our code, but I think it helps clarify and makes it easier to facilitate these types of uses.”

Following an inquiry for a potential homeless shelter to locate in Shawnee, staff noted that the city code lacks clear guidance on land uses and regulations for homeless shelters in the city. Malmborg said city staff’s goal is to write code “that allows homeless shelters of varying sizes to locate” in certain zoning districts of Shawnee.

Lenexa is developing its own code on homeless shelters following a legal dispute with a church hosting a shelter last winter. The Lenexa City Council met in executive session on Tuesday to discuss land uses for homeless shelters with the city’s legal counsel.

Some commissioners shared their support for addressing the issue.

“I think they got caught a little flat-footed on it, so I think it’s good that we kind of figure this out,” Braley said, citing the Lenexa church’s lawsuit against the city.

Malmborg said the city code on homeless shelters can cover a wide range of topics, such as:

Malmborg said city staff also hopes to encourage homeless shelters to be located along busy transportation corridors in the city, such as 75th Street and Shawnee Mission Parkway.

“I’m glad we’re addressing it,” Peterson said. “I’m surprised we haven’t sooner because of the situations that our neighboring cities have had with this.”