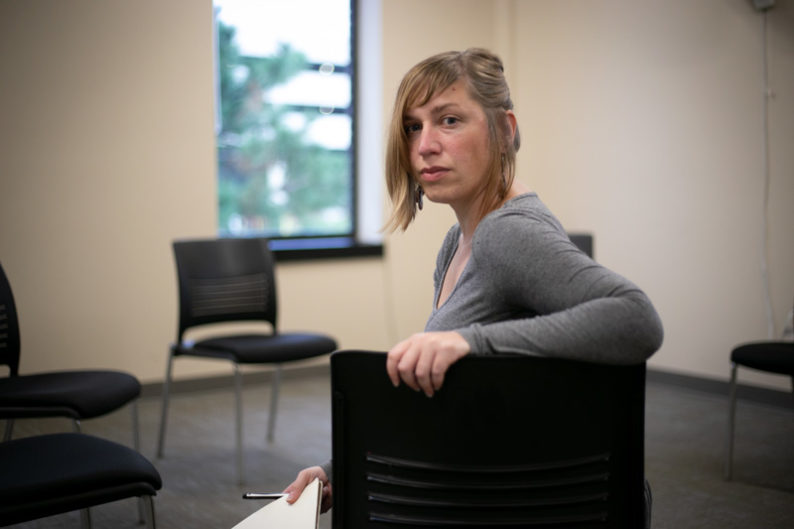 It’s been five years since Lindsey Doolittle lost her husband to suicide. Brett Doolittle was a sergeant for the Kansas City, Kansas, Police Department. Like other survivors grieving the loss of loved ones to suicide, Doolittle has struggled with blame, judgment and isolation from others as well as herself. A  self-described lifelong “observer” who tries to depict what she observes through her artwork, Doolittle has found new purpose and strength in supporting other survivors by drawing sketches of them during support group meetings.

As part of National Suicide Prevention Month in September, the city of Roeland Park highlighted Doolittle’s sketches in her art series called “Faces After Suicide.” The sketches — she’s drawn nearly 100 — are all blind-contour drawings created during suicide loss support group meetings. Currently in Australia, the exhibit includes letters from survivors and resources for suicide awareness.

A native of Lansing, Ks., Doolittle earned her fine arts degree at St. Mary’s and earned a second degree in art education at the University of Missouri-Kansas City. She’s a member of Blue H.E.L.P. and local nonprofit Suicide Awareness Survivor Support. Doolittle just sold her home in Kansas City, Ks., and now lives in Leavenworth. She teaches art at Nashua Elementary in North Kansas City.

Some people, they’re like wow, your art exhibit, how amazing that you honor your late husband, he would be so proud of you. And I tell them that this isn’t for my husband. I did this for the suicide loss survivors because we’re treated differently.

People who die of a physical illness, an accident or in the line of duty, the mourners receive sympathy and compassion. Suicide loss survivors are met with blame, judgment. People isolate themselves from the suicide loss survivor. They shun them. And not only from other people, but we do it to them ourselves.

I’m not a religious person, but I have many religious friends, and I feel for my religious friends because a lot of religious organizations see it as a sin, so they’ll tell the suicide loss survivors that their loved one is burning in hell. That doesn’t help. It does not add and it does not support. They’re just making things worse for them.

Suicide, it doesn’t discriminate. Suicide is of all races, ages, religions, job choices. It doesn’t matter how much they love you or you love them. By the way, I’m going to let you know, the number one person that is blamed, if you are a girlfriend, a wife, your female fiancee, we are the number one targets for blame. They look to the people that are closest.

I blame no one. It doesn’t get you anywhere. His depression exceeded his coping skills.

And I feel that postvention is prevention. The more we can create awareness and letting people know how you can give support. Through our stories, maybe it’ll help not only somebody who might be struggling, but also create an awareness for people how they can be there for one another, how they can be human.

I came three weeks after Brett died. I started the drawings I think the second meeting.

The first meeting, I wasn’t even making any sense. They said I was looking at the ceiling, and I just was blurting out whatever I could, trying to put puzzle pieces together. Just blaming myself, since everybody else was blaming me. That blame is sometimes worse than the death itself. He’d still be here, if it was my choice. I don’t think of it as a choice. Like I said, his brain illness exceeded his coping skills.

It started out I needed to keep my hands busy in the support group meetings, and so I started drawing people, and I wouldn’t look down at my paper. They’re all blind-contour drawings, so I was looking directly at them as they were telling their story. And I let my pen just go on my paper.

For me, I have to draw looking just at them and not my paper so I can capture their emotional repercussions that they are facing. It allows me to catch that raw moment, that glimpse into what’s going on for them.

For the people that are struggling, who think that nobody cares about them, that they’d be better off not here, I want them to see that they’re wrong, because there are people that do care, extremely. What they’re suffering from is a real medical emergency.

For the people who don’t know what to do, how to support a suicide loss survivor: Don’t ask them what they need. They don’t know what they need. Do what you can: Send them a playlist, go do their dishes, mow their lawn, take care of their kids, do their laundry, bring them food. Treat it just like you would if it’s somebody who didn’t die by suicide. What would you do for that person? Don’t shy away from them. If you care about them, be there for them.