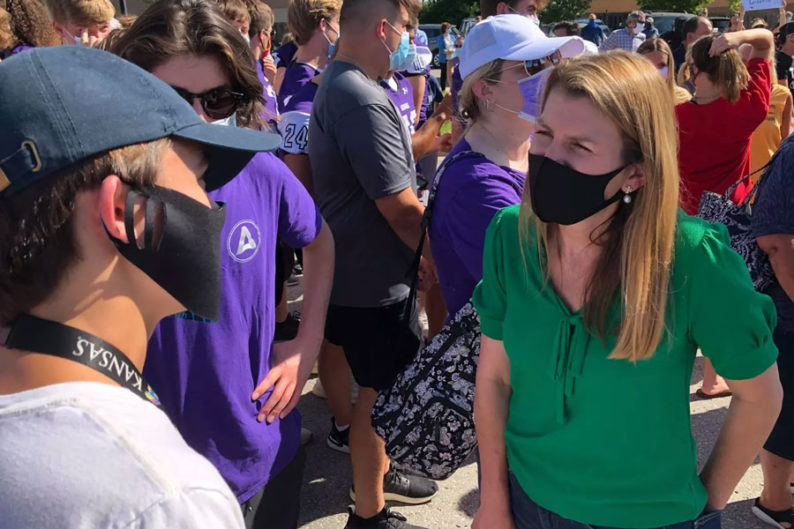 With about six weeks before the election, you might see Republican Amanda Adkins’ team out knocking on doors in Johnson, Wyandotte or Miami counties. Democratic U.S. Rep. Sharice Davids’ outreach efforts in her re-election bid are virtual.

It’s just one sign of the differences between the two candidates in Kansas’ 3rd Congressional District say they would respond to economic and health effects of the coronavirus.

Nationally, the economy and the coronavirus rank as the most important issues for registered voters in the presidential race, according to a September Kaiser Family Foundation poll. Those issues could also play a role in the 3rd District, which has two of the three counties in Kansas with the most confirmed COVID-19 cases.

‘Where politics meets my life’

As schools throughout the 3rd District started the year virtually, some parents pushed back, arguing a return to in-person activities would be best for their kids’ mental and educational well-being.

Rachel Faagutu showed up to a late August rally outside the Blue Valley School District headquarters. She stepped away from her job in March so she could help her three kids with online schooling, guiding them through algebra and geometry homework.

“That was really rough for our family,” Faagutu said. “We had to make some massive shifts and, you know, I’m sure my kids love having me around, but I’m sure they would much rather be with their friends at school.”

It was the first time she’d ever participated in a rally.

“I’m not really doing much in politics,” Faagutu said. “And so this is … where politics meets my life. And I think that’s why it will definitely affect where I vote and how I vote in November.”

Faagutu, a Republican, supports Adkins and is among many who have been energized by reopening protests.

“It’s awakened the people to go, ‘Hold on’ — whether at a local level, at a congressional district level, a state level, national level, we need to take back our voice,” Blue Valley parent Paul Schmidt said.

For independent voter Steven Tucker, the pandemic has brought out the worst parts of both parties.

“Everybody’s hurting. And nobody seems to really care,” Tucker said. “… there’s much weeping and gnashing of teeth don’t get me wrong, but substantial changes to fix it have been lacking.”

He voted for Davids in 2018 and said he will likely vote for her again. But he wants to see a clear strategy — from anyone in government — for addressing the pandemic, a representative that is “willing to speak truth to power.”

“I got to say I was slightly disappointed (in Davids). She kind of just fell in line,” Tucker said. “I was hoping for somebody a little more fiery, then again, Amanda Adkins is about as exciting as a cold bowl of oatmeal.”

What should Congress do?

Adkins and Davids differ sharply on how Congress should respond to the pandemic’s health and economic fallout. Adkins wants to see a payroll tax holiday to help jump-start the economy and supported the first package of COVID-19 federal aid, but she thinks any additional help should take into account the rising federal debt.

“We’re now at $26 plus trillion dollars in debt, which equates to about $214,000 per taxpayer,” Adkins said. “I don’t know about you, but for me, like that bothers me in terms of the future for my own kids.”

Adkins doesn’t support another $600 federal increase to unemployment benefits after it ended in July, and calls President Donald Trump’s executive order providing a $300 weekly boost an “acceptable middle ground for the near term.”

“The focus needs to be on incentivizing work and getting people back to work, less on unemployment,” Adkins said.

Davids, meanwhile, ties economic revival to how the country has and will handle the virus.

“We can’t have a healthy economy without healthy people,” Davids said. “And so one of the top things that we need to be doing from the congressional perspective is making sure that we’re continuing to push for a national testing strategy.”

Davids wants to see aid to state and local governments, additional unemployment benefits and housing assistance included in any additional relief package. She voted against a $3 trillion House proposal in May that included those measures, citing that the bill didn’t have bipartisan support.

She also took issue with the bill’s inclusion of a number of Democratic priorities —like a measure that allowed banks to serve cannabis businesses — that didn’t relate to the virus.

“Those types of provisions are things that we should be pushing for, but not necessarily in a coronavirus relief package,” Davids said.

The Centers for Disease Control and Prevention director says wearing a mask is the “best defense” to getting the pandemic under control, and there’s been no flashpoint over masks in this race: Both Adkins and Davids wear them.

Adkins has about 30 volunteers out knocking on doors every week, her campaign said. After someone at Adkins’ in-person primary-results watch party tested positive for the coronavirus, Adkins’ family quarantined.

“I, myself, because I am around people, choose to test every couple of weeks just to make sure that I’m continuously healthy because that’s part of my commitment to others as a candidate,” Adkins said.

Davids’ primary night event was virtual and her campaign doesn’t have people out canvassing. Instead, they’re relying on phone calls and texts to connect with voters. Because Davids has a fundraising advantage and is running a district that didn’t go for Trump in 2016, University of Kansas political science professor Patrick Miller said she can afford not to go door-to-door.

“If this were truly a top-tier congressional race I would say … she might be making a fatal error by not going out and trying to meet those voters,” Miller said.

“We’re encouraging people to vote by mail and to get those ballots in as early as possible,” Barber said.

The Kansas News Service is a collaboration of KCUR, Kansas Public Radio, KMUW and High Plains Public Radio. It’s focused on the health and well-being of Kansans, their communities and civic life.