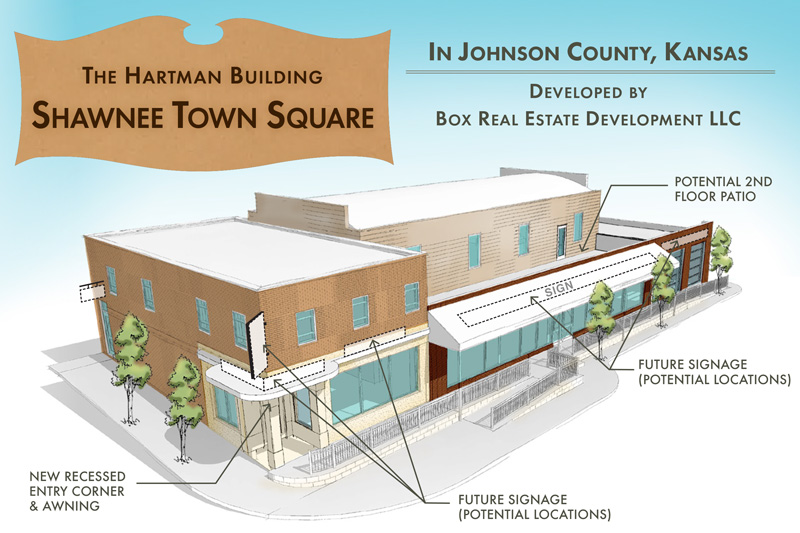 Box Real Estate Development, the developer who just purchased the Hartman Hardware building and adjacent properties in downtown Shawnee, is planning to restore and revise the facade to the century-old structure.

The Shawnee Planning Commission on Monday voted 10-0 to approve the facade revisions, which include adding a rooftop patio and designs that resemble the original design of the building. Commissioner Bruce Bienhoff was absent.

Russell Pearson, owner of Box Real Estate Development, said the rooftop patio will be located above the current Hartman Hardware business, which he plans to convert into a restaurant and bar space.

Box Real Estate plans to restore the facade of the building that’s currently home to Hartman Hardware, Zimmerman Law and Shawnee Shoe Repair and Tayloring to resemble the way it looked a hundred years ago. Pearson said the modifications take inspiration from old photographs of the building that create the “new” old look.

“This building is going to set the tone.”

A portion of the building has been home to Hartman Hardware for the past 74 years. The business owners, Lisa and Mike Unterreiner, plan to retire, close the business and move out of state.

“It’s a sad chapter; nobody who’s been around Shawnee for a long time wanted to see Hartman not be here, but we also knew that was probably going to happen,” said Commissioner Kathy Peterson. “I think Mr. Pearson understands the stewardship that he has there. He’s got great bones to start with. I’m anxious to see where this goes.”

Pearson said the second floor of the exterior of the west side of the building facing Nieman Road will remain largely the same, although they plan to replace windows with plans to replicate the historical windows from the original building.

The primary facade modifications to the western building at 11022 Johnson Drive include:

Facade modifications to the south-facing building at 11018 Johnson Drive include:

Commissioner Peterson had the most comments about the project. She cautioned the developer to create clearer communication for future tenants on expectations for signage, as only one sign per business is permitted downtown. She also shared her high expectations for the project.

“Mr. Pearson, this is kind of like an anchor store; it is the character and the heartbeat of downtown,” Peterson said. “I’m not disrespecting any other businesses that are down here, but what happens with this building is going to set the tone. I’m just going to say I’m going to be watching. So far I like what I see, but I just wanted to throw that into the mix, so thank you for coming in. I look forward to see what you’ve got going.”