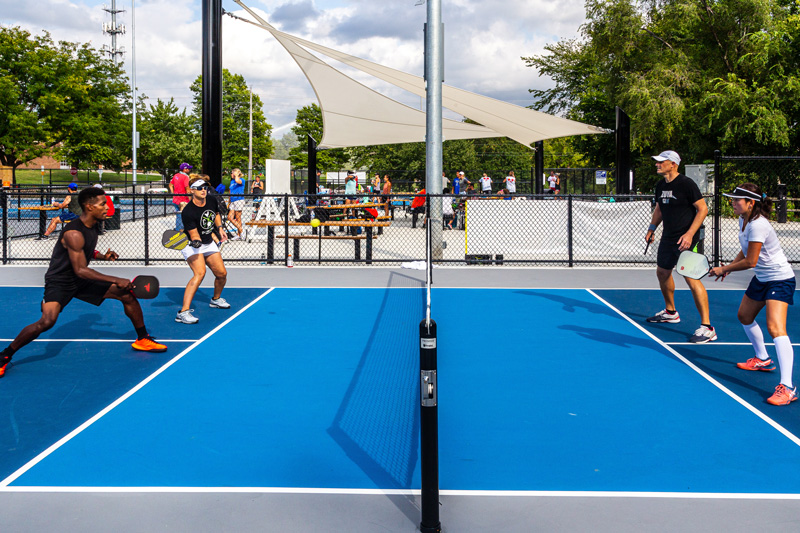 Logan Wagler, deputy director of parks and recreation, said that in total, 96 teams and 192 participants joined in the tournament, which took place at the Lenexa Rec Center due to inclement weather.

“The turnout was amazing and some great pickleball was on display,” Wagler said. “We are so fortunate to have such great community support for this effort, thanks to those who came out and participated. We think this tournament will grow in popularity and look forward to hosting it again next year.”

All participant entry fees and donations benefit the Lenexa Parks & Recreation Scholarship Program, which makes recreation memberships and programs more affordable for Lenexa residents with a demonstrated financial need, according to city documents.

Flu shots are now available at the Johnson County Department of Health and Environment’s walk-in clinic in Olathe. Flu shots are given on a walk-in basis from 8 a.m. to 4 p.m., Monday through Thursday, and 8 a.m. to 2 p.m. on Fridays at the clinic, 11875 S. Sunset Drive.

Johnson County staff reported that most insurance plans, Medicare Part B and Medicaid cover the cost of the vaccine, and the cost is $30 for those without health insurance. The department recommends that everyone over the age of 6 months get a flu vaccine to reduce the risk of getting the flu, and reduce the risk of severe illness or hospitalization for those that do get the flu, according to a press release.

“Hospitals and doctor’s offices may be busy caring for COVID-19 patients and other health needs during the fall and winter ‘respiratory virus’ season,” said Sanmi Areola, department director. “Getting a flu vaccine will help keep you and your loved ones out of those medical settings.”

Areola said the flu vaccine will not protect people from getting COVID-19, but it will offer protection from influenza viruses that may circulate this season. It also could help ensure hospitals and medical resources are available for COVID-19 patients and others who need them.

Flu shots are also available from a doctor’s office, urgent care clinic or a pharmacy. Johnson County staff asks residents to maintain 6 feet of distance and wear a mask when getting a flu shot, and wash hands thoroughly afterward.

A dog died in an apartment fire in Lenexa on Sunday afternoon.

The Lenexa, Overland Park and Shawnee fire departments responded with Johnson County Med Act to a building fire at 3:24 p.m. at The Retreat at Woodridge Apartments, 8818 Hauser Drive, according to a press release. Upon arrival at 3:27 p.m., the first arriving units found a fire in a first-floor apartment of the three-story building. Lenexa police officers assisted with evacuation efforts from the apartment units. One dog self-evacuated, and a second dog was rescued during suppression operations. Resuscitation efforts for the second dog were unsuccessful.

The fire, smoke and water damage were confined to the first-floor apartment, and cause of the fire is unknown and under investigation. The fire was reported under control by 3:40 p.m. and was reported out at 3:51 p.m. Red Cross is providing assistance to three residents that were displaced.

Banners with the new logo, previously approved by the city council, were placed throughout downtown Mission along Johnson Drive.

Posted by City of Mission, KS – Government on Wednesday, September 16, 2020