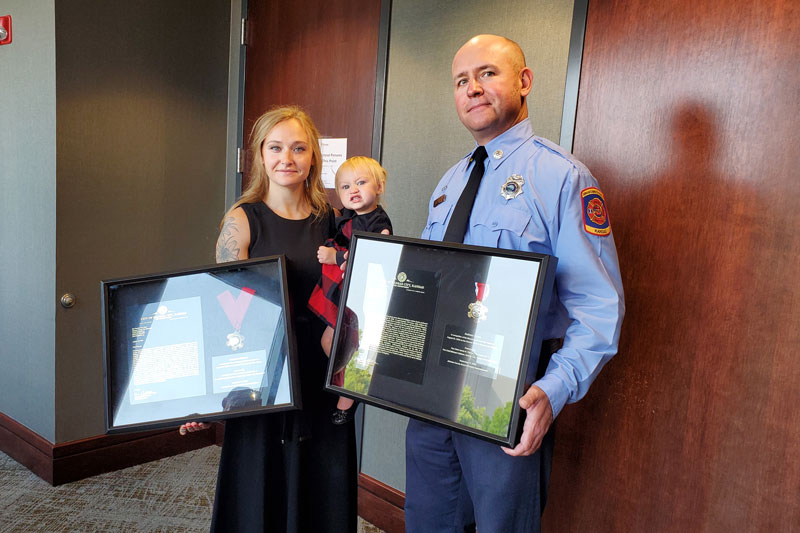 Andrew Eccles (right) and his girlfriend Breanna Shannon (left) receive tokens of appreciation after the couple saved three lives at the Kansas River on Aug. 22. Photo courtesy of Lori Sand.

Andrew Eccles and his girlfriend, Breanna Shannon, were fishing on the Kansas River on Aug. 22 when they saw several people in need of help. Eccles, an off-duty Johnson County firefighter, and Shannon ended up saving three lives that day.

The Board of County Commissioners last week recognized the couple for their heroism with medals of courage and honor during the commission meeting. Eccles said he’s glad he was there, but he still mourns for the family he helped. While Eccles and Shannon were able to help rescue two children and an adult, a fourth family member, 11-year-old Rebecca drowned.

When the family’s beach ball fell into the river, Rebecca went into the water to get it but was pulled under by the currents, according to a Johnson County press release. Two children and an adult, all of whom Eccles and Shannon saved, went in after Rebecca to try to save her.

Eccles performed cardiopulmonary resuscitation, CPR, on one of the children who had gone into cardiac arrest. He said learning CPR is something everyone should do, so that when emergencies arise, it becomes second nature.

Michael Callahan, Kansas City Kansas Fire Department fire chief, said in a release the tragedy could have ended in four deaths if it were not for Eccles. Rebecca’s death is a tragedy itself, but Callahan said Eccles’ act “should be seen and celebrated as heroic.”

Chairman Ed Eilert thanked Eccles and Shannon during the commission meeting for their quick reaction that ended up saving three lives.

“You have the grateful community appreciating the courage that you demonstrated to do what you could to protect and save residents of our community,” Eilert said.