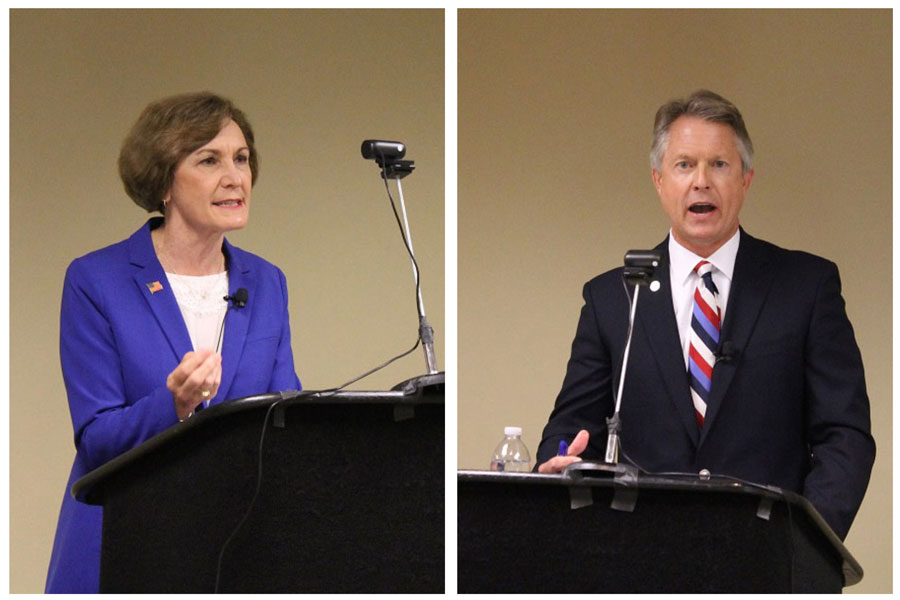 U.S. Rep. Roger Marshall and Kansas Sen. Barbara Bollier battled Saturday in their first debate over the merits of fast-tracking a replacement for Supreme Court Justice Ruth Bader Ginsburg or waiting until after the November elections.

Ginsburg’s death on Friday ensured high court confirmations would become a central issue in the race to fill an open U.S. Senate seat. Marshall, the Republican, and Bollier, the Democrat, held their party lines in the annual Kansas State Fair debate hosted by WIBW Radio in Topeka.

Marshall said the situation is completely different from 2016, when a Republican majority in the Senate refused to consider Democratic President Barack Obama’s nominee to replace Justice Antonin Scalia, who died in February of that election year. The difference now, Marshall said, is Republicans control both the presidency and the Senate.

Republicans, Marshall said, “were elected to do just this.”

“Look, America elected a Republican president and a Republican Senate for just this time,” Marshall said. “This is our time to keep our promise and to move forward with one of the folks that President Trump has on a list. This is an important time in history, one we can’t get wrong. That’s why the stakes for this election are so high.”

Bollier said the confirmation of a Supreme Court justice is one of the Senate’s most notable responsibilities, and one that shouldn’t be politicized.

“Kansans should make their voices heard,” she said. “And the leaders of Kansas that are elected in November are who should be voting and deciding, confirming who will be filling our vacancy on the Supreme Court. I believe that the Senate has plenty to do in the meantime — they need to pass additional relief and funding for Americans struggling with this very, very difficult pandemic.”

The virtual debate lacked the typical fanfare of a jubilant live crowd. The threat of COVID-19 forced the cancelation of the Kansas State Fair for the first time since its inception in 1913, so there was no choreographed heckling, no booing or cheering, no stench of soiled hay.

Instead, the candidates answered questions from a panel of journalists from across the state via video conference.

Kansas Reflector senior reporter Tim Carpenter asked the two physicians to what extent should wealthy white people such as themselves strive to understand the motivations of Black Lives Matter activists.

Marshall said he was privileged because his parents “worked their tails off.”

“I just don’t see skin color,” Marshall said. “I think there’s things that we can do to improve everybody’s relationships, and it all starts with good education and a good economy. And that’s what Republicans stand for, is raising people out of poverty, giving them a job that that brings meaning and fulfillment of their lives, not keeping them buried down in the ghettos. So I’m all for lifting other people up.”

Bollier said the country has been “in crisis for many years.”

“We need to look to things that actually make a difference for people,” Bollier said. “One of those is public education. I’m a long-time champion for public education in Kansas. I stood up to (former Republican Gov.) Sam Brownback when he tried to dismantle our early childhood education system, which is so needed for all people to be successful. And I voted for some of the very largest funding increases to the classroom in Kansas history.”

The two candidates clashed on various other issues, including whether marijuana should be legal.

“Absolutely, we must decriminalize this,” Bollier said. “We are finding that so many people unfortunately end up in our criminal justice system because of substance use disorder issues.”

Marshall said he was open to research into “medical opportunities,” but firmly opposed to the recreational use of marijuana.

Kansas Reflector is a nonprofit news operation providing in-depth reporting, diverse opinions and daily coverage of Kansas state government and politics and is an affiliate of States Newsrooms. This public service is free to readers and other news outlets.