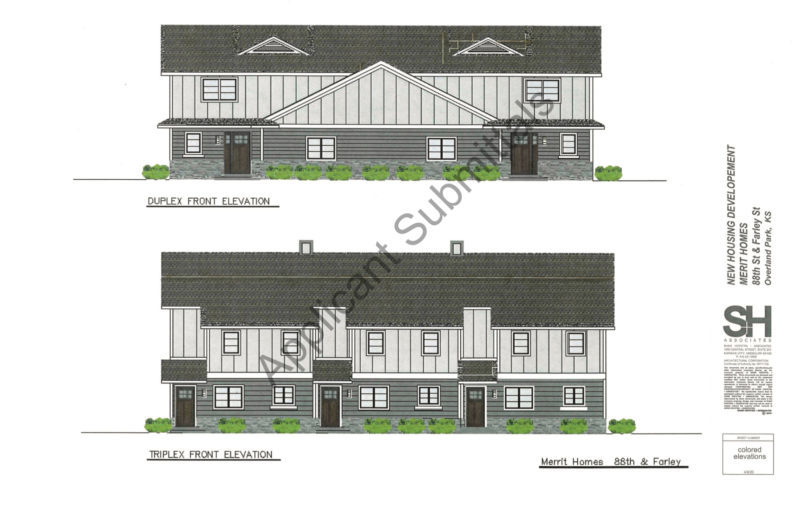 A small project aimed at providing lower-cost homes to the “missing middle” of blue- and pink-collar workers has vaulted a hurdle in Overland Park.

The Merit Homes project on the southwest corner of 88th Street and Farley Street won rezoning at Monday’s Planning Commission meeting. It would allow nine duplex buildings on the 2-acre vacant area. The rezoning will be considered by the full city council at a later date.

The development near Strang Park and the Central Resource Library had been opposed in a neighborhood meeting when it was first introduced last summer. Some 30 neighbors in nearby single-family homes objected at the time, fearing the multi-family units would change the character of their neighborhood and bring in crime.

“This subdivision was a shock to all of us because it was 18 units in a single-family neighborhood,” said Sandra Miller, a neighbor who said she was representing the Westbrooke subdivision.

Miller’s main concerns Monday were about the design of the units and landscaping. “This is going to be the crowning point of our neighborhood and we wanted to have a neighborhood feel not an apartment feel,” like some other nearby apartment buildings, Miller said. Developer Raj Bhakta said he would be willing to negotiate on design elements and landscaping in the coming weeks.

Bhakta, of Savita LLC, said the duplexes that will be offered would be either 1,500 square feet or 2,000 square feet.

Bhakta said he offered the development because it would meet one of the goals of the city’s long-range vision – affordable housing.

“Our objective is to provide new and diverse housing products to the community that are not available to Overland Park,” he said. “We feel this type of product is the right fit for 88th and Farley.”

Miller was the only speaker at the public hearing on the development, although some emails were sent earlier. The rezoning was approved unanimously.