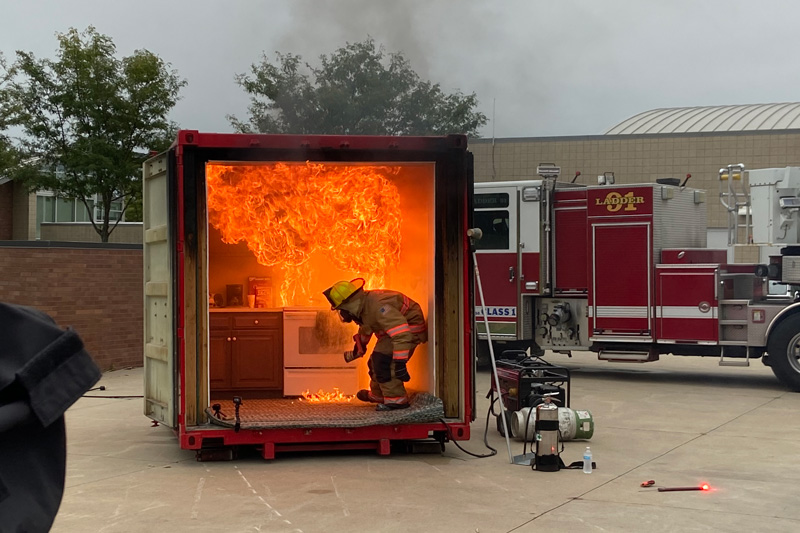 The Lenexa Fire Department last week demonstrated the dangers of a grease fire on a stovetop and how to extinguish it properly. The educational opportunity comes ahead of National Fire Prevention Week, which takes place Oct. 4-10. Photo courtesy city of Lenexa.

The Lenexa Fire Department last week demonstrated the dangers of a grease fire on a stovetop and how to extinguish it properly. The educational opportunity comes ahead of National Fire Prevention Week, which takes place Oct. 4-10.

With the changes to this year’s school schedules and teaching methods, the Lenexa Fire Department joined the Heart of America’s Fire Marshal’s group to share fire prevention messages in a new way. Lenexa firefighters filmed a safety message for students showing
them the proper way to extinguish a stovetop grease fire. They also demonstrated the devastating results of improperly extinguishing a grease fire. The message will be shared with local elementary schools.

The Human Rights Defense Center, a Florida-based nonprofit that focuses on prisoner rights, is suing the Johnson County Board of Commissioners and the Johnson County sheriff, claiming they’re withholding magazines and other publications from jail inmates.

The nonprofit says the staff at the New Century Adult Detention Center has refused to deliver dozens of the organization’s mailings to inmates, in violation of their First Amendment rights.

“We sued the Shawnee County jail in Topeka over a similar policy around seven or eight years ago,” said Paul Wright, executive director of the Human Rights Defense Center. “And these policies banning books and magazines are blatantly unconstitutional. And I have no idea why they keep doing it in Kansas.”

The lawsuit, which was filed last week in federal court, says that while the jail has an official mail policy in place, its correctional officers have arbitrarily enforced that policy. [Nonprofit sues over alleged censorship of magazines at Johnson County Jail — KCUR]

The city of Roeland Park and the League of Women Voters is hosting a drive-thru voter registration event on Sept. 19 from 10 a.m. to 2 p.m.

LWV, The Voter Network and Voter to Voter volunteers will all be onsite to register eligible persons to vote. Volunteers will be set up in the city hall’s front parking area and will ensure the process is safe for everyone.

Voters must be registered by Oct. 13 to vote in the Nov. 3 general election.

Shamrock Roofing and Construction of Lenexa presented this year’s winner of the “Roof 4 a Hero” contest, 79-year old U.S. Navy veteran, Kathleen Padelli, with the gift of a new roof replacement on Tuesday, Sept. 15, at her home, on West 75th Street in Overland Park. The contest, founded in 2017, honors our nation’s veterans and first responders.

“We are doing all we can to keep my mother in her home,” said Regina Carey. “Her house has been hit by cars twice and repaired, and in the past few years, has had numerous repairs including a new A/C, new heater and main line plumbing. We are so grateful she will now have a much needed new roof over her head.”

Seaboard Corp., a Merriam-based glocal food, energy and transportation company, recently announced a new chief executive officer, marking the first time in 102 years a family member has not been CEO.

Robert Steer was elected by the company’s board of directors following the July 10 death of Steve Bresky, who was 67 years old. Steer has been with Seaboard for 35 years, previously serving as the executive vice president and chief financial officer since 2011.