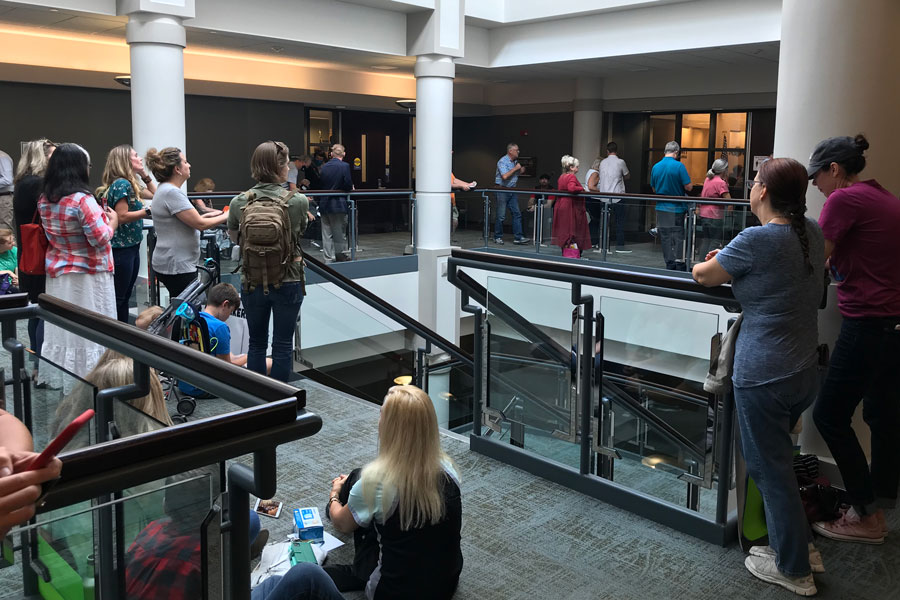 A crowd of more than 100 people waited outside the BOCC chambers Thursday, waiting to make comments. Some said they felt unsafe with many people not wearing masks or social distancing. Photo credit Leah Wankum.

After hours of impassioned, angry and, at times, teary pleas from some 60 speakers, the Johnson County Board of County Commissioners voted narrowly Thursday to extend a mask mandate until Oct. 15. In extending the order, commissioners agreed with the Republican-dominated State Finance Council, which extended Kansas Gov. Laura Kelly’s statewide emergency declaration last week.

Compared to past votes, commissioners spent relatively little time discussing the mandate before their vote Thursday. They first voted down a motion by Commissioner Mike Brown to take no action. Brown said that motion would have exempted the county from Kelly’s order.

Ultimately, however, commissioners decided to side with public health officials, including those in the Center for Disease Control, who have said mask wearing is key to slowing the spread of COVID-19.

Voting in favor of the extension were Chairman Ed Eilert, along with Commissioners Janeé Hanzlick, Jim Allen and Becky Fast. Voting against were Brown and Commissioners Steve Klika and Michael Ashcraft.

“It’s very, very important that we continue to emphasize the wearing of (masks) to the extent that we can protect our public, protect our community, protect our children and staff who are now in person attending schools,” Eilert said. Hanzlick agreed, saying the masks give people more freedom and peace of mind about going out to businesses.

“Never seen a community so polarized”

Eilert and Hanzlick both noted letters of support for continuing the mask order from other community leaders. The commission received a letter from the superintendents of Johnson County’s six public school districts, urging the order be extended. Letters of support also came from top officials of Advent Health Systems, University of Kansas Health Systems and St. Luke’s South.

But Klika cited the heated disagreements between those supporting and opposing mask-wearing, including the crowd of commenters Thursday.

“I’ve never seen a community so polarized and no one is coming down the middle to find a way out of this. This is terrible,” he said.

He added that doctors and agencies haven’t been able to agree on such mandates, though, most public health officials say mask-wearing is one of the most effective ways to prevent the spread of the disease.

“It’s been one fight after another,” Klika said. He called the mask order “government overreach.”

Brown, who has spoken at length in the past against Kelly’s public health orders, was relatively quiet Thursday, except for asking what the penalty is for refusing to comply. Cynthia Dunham, the board’s legal counsel, said an injunction or a civil penalty of up to $2,500 per violation could be pursued by the district attorney or the state attorney general.

Johnson County’s public health officials also weighed in as the meeting began. Public Health officer Dr. Joseph LeMaster noted the county has over 9,700 cases and has been averaging 90-100 new cases per day, though cases have been decreasing over the past two weeks. Meanwhile, LeMaster said, the county’s 14-day average percent positive test rate, as of Thursday, stood at 12.4 percent.

Dr. Sanmi Areola, the county public health director, noted that the number of deaths in people younger than 60 has also been increasing.

The board’s vote was taken after almost three hours of testimony from county residents on both sides of the issue. The speakers waited outside the hearing room in hallways around the stairwell, and often could be heard hooting and applauding anti-mask points. The testimony was not short of pathos, with Christian scripture quoted and personal stories on both sides.

A frequent point by anti-mask speakers was that the people should be able to opt out of mask wearing if they want, and that the mandate amounts to unnecessary government control over personal freedom.

Some speakers vowed they would not comply with an extension of the order.

Britney Valas said her business suffers every time a mask order is issued because of the fear it instills. “Your mandate only has power if people listen to it,” she said. “I have never worn a mask, not once. Your mandate has not affected me personally at all. It will not affect me personally for the rest of my life.”

She promised a surge of other like-minded mask refusers. “I don’t care about your mandate. I’m throwing my mask away.”

Nicole Atwood of Roeland Park said she has felt discriminated against in public places because of the mask order. “I’m discriminated against every single day in my county now, sometimes multiple times a day,” she said, “We are treated worse than second class citizens,” she said, citing an example of being asked to move back from the counter as she was trying to mail a package.

Those for masks focus on public health, need for sacrifice

On the other side, those in support of the mask order couched their arguments in terms of public health and personal safety. Some speakers on the pro-mask side said they felt unsafe at Thursday’s meeting because many people waiting outside the board’s chambers were not wearing masks or social distancing.

Linda Stoner, 72, of Shawnee said she felt the conditions endangered her. “I’m going to be really brief so I can go home and get in the shower,” she said. “I’ve heard a lot from really good people who believe they’re doing the right thing. At the same time, I feel very uncomfortable because I believe in their doing what they feel is the right thing they have endangered me this morning.”

“You’re not hearing from a lot of the mask proponents because it’s not really safe for us to us to be in crowds like this,” she said, adding that wearing a mask is a small sacrifice to make for the greater good. Greater sacrifices were made in World War II, she said.

Kansas Democratic state Rep. Susan Ruiz also spoke in favor of the mask mandate. The pandemic has disproportionately affected Latinos, like herself, she said.

“This is about lowering our risk of catching the virus and about saving lives,” she said. “I don’t understand the reason behind turning the wearing of the mask into a symbol of division between political parties, supports and non-supporters of the president.”

Meanwhile, James Buck Firth of Olathe said he grieved for his father-in-law, who died during the pandemic in a long-term-care facility.”The virus is not a hoax. It’s not going away like magic. It is a reckless driver posing a constant danger to anyone,” he said. “Don’t be reckless, be patriotic. Wear a mask.”