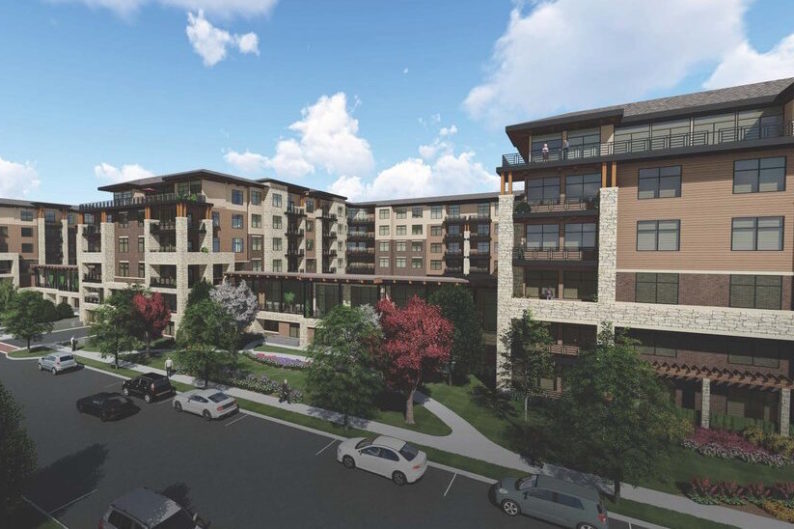 A controversial rezoning that would allow 210 apartments in a redeveloped Ranch Mart shopping center has gotten the blessing of the Overland Park Planning Commission.

A controversial rezoning that would allow 210 apartments in a redeveloped Ranch Mart shopping center has gotten the blessing of the Overland Park Planning Commission.

A split commission voted 6-5 to approve the apartment complex, which is 77 feet at its tallest, after first voting down a motion denying it. The measure is scheduled to be heard by the full city council on Oct. 5.

The apartments are proposed by EPC Real Estate Group on 11.4 acres of the landmark center on the southeast corner of 95th Street and Mission Road, where the cities of Overland Park, Prairie Village and Leawood meet. The redevelopment calls for as many as seven stories, including one basement level for self storage area and 238 parking spaces.

The one- and two-bedroom units would be marketed to “active seniors” in the 55-plus age group, said Bob Johnson, attorney for the applicant. The complex would have outdoor amenities and an indoor pub for residents but would not have an industrial kitchen or meal site, he said.

The plan also calls for razing fifteen single-family duplexes on the south side of 95th Terrace. Only two of the duplexes are currently occupied, and leases are expiring soon, Johnson said.

Commissioner Steve Troester supported the rezoning because it will provide another option for older residents. “My number one item is aging in place. I think we have to give those opportunities to people,” he said.

More than a dozen people spoke against the project at the commission meeting, saying they also have a petition against it signed by 360 people. Their biggest objections were about the scale of the project — the height in particular — and what they said was a lack of transition between the complex and the pre-existing ranch-style, single family homes immediately to the south of it.

“This is a wonderful building that you’re going to build. It’s just in the wrong space,” said Rosemary Stoermann, a neighbor.

Several of the speakers mentioned the height disparity between the apartments and their homes.

“It’s going to be massive and everything we’re doing to make it look less massive is trying to hide the main issue,” said Eric Hernandez, who noted that he’ll be looking up 80 feet toward the apartments near his home.

Lawrence Graham, a retired architectural engineer, said the city has in the past provided a more gradual transition between high-density apartments and smaller single-family homes. “This is one of the few times I disagree with the staff,” he said.

Alexandra Inglish offered a different reason for her opposition. Inglish, 32, said she enjoys a neighborhood that is diverse racially and in age range. However the apartments would change the demographics. “We need to have this diversity and from what I’m understanding this facility is really going to cater to very specific wealth and age group,” she said.

Some commissioners echoed the sentiments on the transition between two types of development.

“This is the type of project that we need more of,” said Commissioner Mike Flanagan. “But unfortunately I don’t feel it’s in the right place.”

The commission also approved a special use permit for 365 basement self-storage units. Some residents expressed concern about traffic from bigger trucks that may be driven by storage customers, and Hernandez urged the city to be sure the storage is actively monitored for safety, since it will be beneath the other uses. That permit was approved, 10-1.