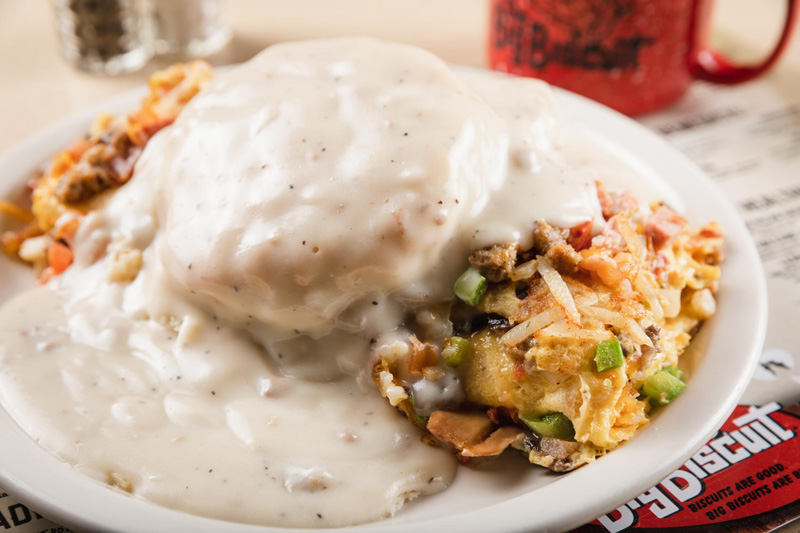 The Big Biscuit is adding a new restaurant in the Sonoma Plaza shopping area just east of I-435 along West 87th Street Parkway. The owners hope to open by March 2021. Photo courtesy The Big Biscuit.

The Big Biscuit is opening its first location in Lenexa.

Coming soon to Sonoma Plaza, a developing retail area just east of I-435 along West 87th Street Parkway, The Big Biscuit is a local breakfast and lunch restaurant company with multiple locations in Johnson County and the Kansas City metro area.r

The new restaurant will be located between Starbucks and McKeever’s Market grocery store. Framework construction on the building that will house The Big Biscuit is already coming along.

Chad Offerdahl, who co-owns the company alongside David Offerdahl and Jay Carpenter, said they hope to open the new restaurant in late winter or early spring, perhaps by March.

“We’ve been targeting Lenexa as an area that we thought we would do well in for quite some time, but we’ve really just been holding out for a location that really, we thought, made sense for us,” said Chad Offerdahl. “We’ve been seeing all the impressive growth just on the other side of 435, with all of the new Lenexa City Center area. When this opportunity came up to be in the new Sonoma development in front of McKeever’s, we just couldn’t pass it up.”

The Big Biscuit is growing operations across the metro area and just opened its newest location in Westport last week. Offerdahl said the Westport location has a new design and “refreshed look” with new elements and an open ceiling. The Lenexa location will sport a similar new look and feature a covered outdoor patio on the east side of the building.

“For anybody living in the Lenexa area that’s familiar with our Shawnee location or other nearby locations, this is going to be a much different look than what they’re used to,” he added.

The Big Biscuit will begin the approvals processes through the city of Lenexa once they complete architectural blueprints.