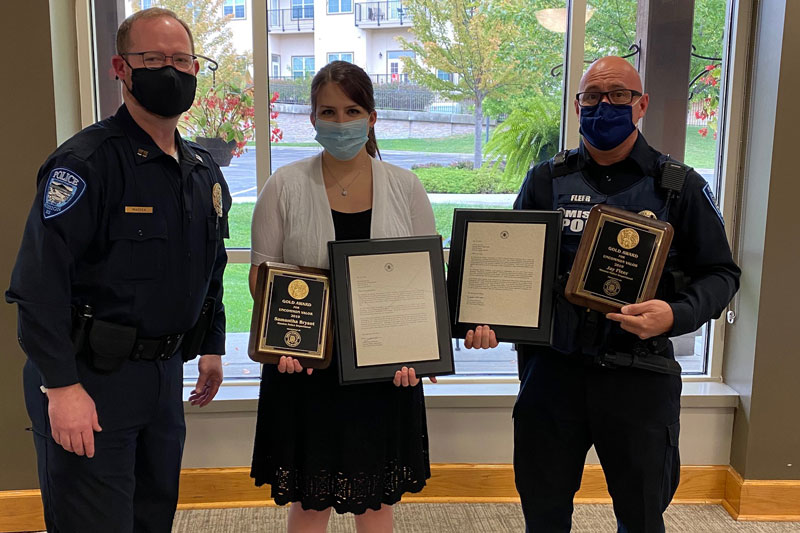 The city of Mission recently honored Officers Jay Fleer and Samantha Kunzler-Bryant for their response to the Highlands Elementary shooting incident in March 2019.

Although Mission would typically present officer awards during city council meetings — which have turned virtual due to COVID-19 — the city held a socially-distanced officer award ceremony Friday to honor police going above and beyond. Fleer and Kunzler-Bryant were among awardees, and received the Kansas Association of Chiefs of Police Gold Award for Uncommon Valor in connection to the Highlands shooting.

The Highlands shooting caused Mission police officers to engage with Dyan Christopher Ruffin, who was arrested and later charged with multiple crimes related to the shooting. Mayor Ron Appletoft said the awards are a reflection of “the incredible service” Mission police provide everyday in critical situations.

“People don’t hear enough about the good works of our police officers,” Mayor Ron Appletoft said. “When our officers arrive on a scene, they don’t know what they will find.”

Interim Chief Dan Madden, who stepped into his role after Ben Hadley retired due to health concerns, said the department and its officers are inspiring.

“We are so fortunate to have such a dedicated and professional team of police officers,” Interim Chief Dan Madden said. “The things they do to keep our community safe is inspiring and reflects the commitment each of them have.”