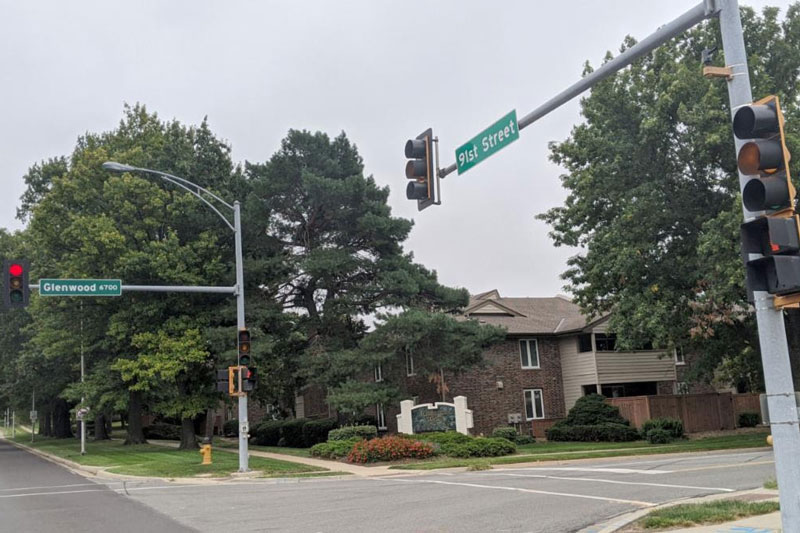 Traffic lights at the intersection of 91st and Glenwood and 91st and Lamar are tentatively slated for removal, following recommendations from Overland Park's Public Works Committee. Photo courtesy City of Overland Park.

Two Overland Park traffic signals are scheduled for removal, the city announced in a newsletter last week. Traffic lights at the intersection of 91st and Glenwood and 91st and Lamar are tentatively scheduled to be permanently removed, following a 90-day transition period.

“Traffic volumes at both locations have decreased and no longer meet adopted standards for use of signals,” the city said in its newsletter. The traffic signals are also nearing the end of their expected lifespan.

The Public Works Committee unanimously recommended the signals’ removal and councilmembers will vote on the item during tonight’s city council meeting.

After the transition period 91st and Glenwood will have stop signs for vehicles traveling north and southbound while Lamar will temporarily convert into a four-way stop. Eventually the 91st and Lamar intersection will be turned into a mini-roundabout, the city said.

Overland Park resident Donna Palatas contacted councilmembers and voiced concerns with the plans, and said she believed it will be dangerous for drivers on Glenwood to turn left onto 91st Street from a two-way stop. Palatas has also started a petition against the removal of the traffic lights.

“….91st Street is already busy, and will become even busier when the multi story office building near 93rd and Glenwood is opened,” Palatas said. “I have lived near 91st and Glenwood for more than 17 years, so I have seen first hand how busy Glenwood is.”

Palatas also voiced concerns with the planned roundabout, commenting that since the intersection is at the top of a hill, even with warning signs “people will not see the four-way stop in time, and ultimately not see the roundabout in time,” she said. “I do think this will result in more crashes unfortunately.”

The roundabout will also make it difficult for pedestrians to cross at 91st and Lamar, she noted.

After receiving Palatas’ message councilmember Logan Heley asked for additional information from the city’s traffic engineer who responded that the new office building at 95th and Metcalf was not likely to cause significant traffic at 91st or on Glenwood. Traffic from the new building at the east side of Metcalf would have access to 95th, Metcalf and 93rd. And the all-way stop will give pedestrians the ability to cross at 91st and Lamar, Heley said.

“Now, all of this being said, the intent initially is to monitor how traffic behaves at both locations before the signals would be removed after a 90-day period,” Heley said. “If the trial period shows issues that need to be addressed, they will be. Even if the signals are eventually removed and issues come up, staff will work to mitigate those as quickly as possible.”