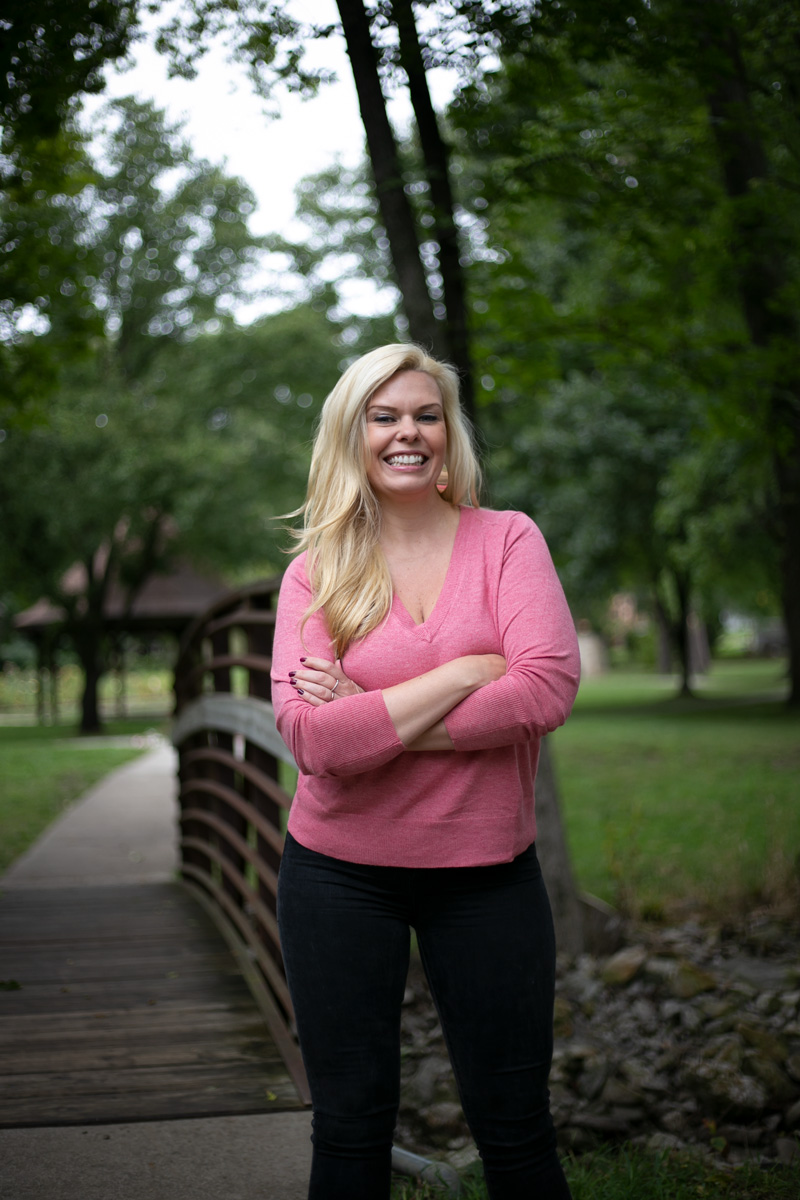 Shawnee native Nicole Burch is an actress and comedian in Los Angeles, and she’s about to release a national comedy special about her date with a celebrity.

Originally from Shawnee, Burch has spent the past four months in quarantine in Bashor with her 1-year-old daughter, Everly, and her mother, Terri Haller, and the family dog, Tootsie (sadly, the chocolate cocker spaniel died last week).

After graduating with the Class of 2000 at Bishop Miege, Burch earned a dual degree in biology and Spanish from Washburn University in Topeka. Her career launched after a few years performing with the Sunday company at the Groundlings Theatre in Los Angeles, where Saturday Night Live picks many of its cast members. Her commercial agency, Reign Agency, handles her bookings for commercial gigs, like this risqué commercial with Jack in the Box.

Her comedy and writing career for television and feature films started with sketch and improv at the Groundlings Theatre. She wrote and performed a program called “The Seven Guys You Date Before You Get Married,” which ran a successful 15 months at the theatre.

Burch’s comedy special, “Never Been Kissed,” will be released Sept. 15 on Apple and Amazon. The show is named after the 1999 film of the same name, starring Michael Vartan, who plays a harrowing part in her story.

When I was 17, this movie came out and I was obsessed with it. I watched it over 300 times. I am not exaggerating.

I didn’t have a lot of friends in high school — towards senior year, I did a little bit better — but I remember I didn’t speak once my first semester of sophomore year. All I did was watch this movie on repeat, repeat, repeat.

I was so in love with Michael Vartan that I would cut magazine clippings of his face out and I’d make a vision board — it was called a collage back then — that was my love board or whatever, so embarrassing.

And then, cut to 20 years later, after dating so much in Los Angeles and going on so many first dates that end nowhere — like you barely even make it past appetizers, because some of the things that happen, they’re just really bad dates — I end up meeting somebody. We hit it off, we date for a year, I was madly in love. And then I found out he’d been living with his ex-girlfriend the entire time we were together.

The CIA operative skills that he would have had to pull that off were pretty phenomenal, because I never went to his place, he always came to mine. There’d be times where we’d be standing outside of his place because it was close to where I worked, but we always hung out at my place because his place was kind of dumpy and not in a good neighborhood.

I had no clue. It was a terrible breakup. So I decided to take myself off the market for two years, I did a sabbatical. I was like I’m just going to do self-healing and self-care and not date.

And I was still self-quarantining, pretty much, and then my girlfriend Kristin Dattilo came to me and was like I’m taking you to this birthday party in the hills. She’s like I got you an outfit, putting you in the shower, let’s go, she drags me there.

And there’s this guy there, I’m like oh my god, he looks so familiar, and why do I butterflies? I go Kristin who is that, and she’s like well that’s Michael Vartan.

Are you joking me? She goes yeah, we worked on a few projects, I’ll introduce you.

And so we end up meeting and I am cracking jokes because I’m really insecure, so when I’m insecure I get funny and loud. So he comes over and he starts talking to me and I’m like *whispers* oh my god, Michael Vartan is f—— talking to me, and he’s sweet, and he just wants to get to know me, I act like I don’t know what he does for a living, and we end up hitting it off.

So we’re sharing photos of our dogs, he’s like wait is she in a Chiefs jersey? And I was like yeah, I’m a Kansas City Chiefs fan, he’s like oh I’m a Raiders fan, I’m like oh well it looks like we have a little bit of a rivalry. And we start joking ‘cause it’s football season.

So he’s like let’s go watch a football game, I was like we should totally do that (what’s happening?). And he ended up asking me on a date that night for the next night.

So I can’t tell you the rest of the special, but we do go on a date. It should be the best date of my life, and through no fault of his own, only my fault, does the whole thing fall apart. Everything that could go wrong went wrong. It was embarrassing. I couldn’t write this story if I was making this up.

A few months later, I’m doing stand-up, and there’s this producer, Corey Craig, who’s the director of the show, I was like hey man I might have enough material that we can film and then maybe pitch to somebody to get a special going.

He comes to a few of my shows and he’s like, look you’re funny, but most of it is just dating complaints and there’s already so many female comics that cover that.

I was like oh I totally understand, and he’s like well you have one more show tomorrow, I’ll come to that. And I was like oh don’t even bother, it’s not a big deal. He’s like no I’ve already got a meeting next door, I’m going to pop in anyway.

So he pops into the show, it’s a very small show, and I’m telling the Michael Vartan story. I’m supposed to have only eight minutes or something and I get the light and I start to speed up through it because it means you’ve got two minutes left.

And the guy who’s running the show is a friend of mine, he goes, just keep going, keep going. And I’m like are you sure? And he goes tell the whole story.

I end up telling the 20-minute version of the story — which is still an abbreviated version — and the women are on the edge of their seats and they’re covering their mouths and they’re turning beet red. I hadn’t rehearsed it, it was just off the cuff, and when I got off stage, Corey was like oh my gosh, this is what we’re doing, this is what it’s going to be called, “Nicole Burch: Never Been Kissed,” you’re going to tell that whole story.

And I was like but it’s a dating story, and he’s like nope, nobody’s ever told a story like that: A girl who meets the guy she’s been in love with 20 years who she saw on television, and we have so much hope that it’s going to work out and then it doesn’t, but it’s nobody’s fault, and we’re rooting for you the whole time. So here we are.