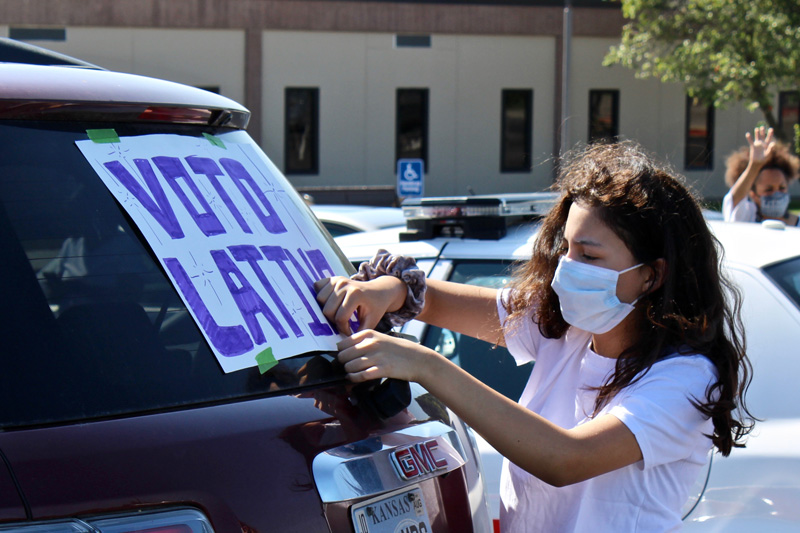 The League of Women Voters of Johnson County is hosting a virtual conversation on diversity, equity and inclusion this weekend. Above, community members decorate their cars to promote voter registration in Wyandotte County during the July Souls to the Polls Car Caravan. The public is invited to take part in the next one, Saturday, Oct. 10. Photo courtesy League of Women Voters of Johnson County.

The League of Women Voters of Johnson County is hosting a virtual conversation this Saturday, Sept. 12, on local efforts at enhancing diversity, equity and inclusion.

The webinar begins at 9 a.m. and registration is open to anyone interested in participating.

Mary Lou Jaramillo and Ann Sanders, board members with the Johnson County league and co-chairs of the chapter’s diversity, equity and inclusion initiative, said the webinar will be interactive in nature to include a discussion about individual biases.

Each participant will be asked to “reflect and commit to enriching themselves and their communities,” according to the event website.

“These two individuals are highly talented, and what they will urge our listeners and participants to do is to explore their own journey,” Sanders said. “They will tell some things about themselves, but it really isn’t about them. It’s about pushing our thinking and our actual belief systems.”

“A place to begin”

Sanders said this virtual conversation is “a call to action” and will be one of many upcoming discussions centered around diversity, equity and inclusion in Johnson County.

“It’s a journey, a movement, that we’ve started within this chapter,” Jaramillo said.

In light of the nationwide movement sparked by the deaths of George Floyd, Breonna Taylor and other Black people at the hands of police, Jaramillo and Sanders say they see the current moment as a tipping point to have conversations like Saturday’s.

“A nation divided will not stand, and people are beginning to see that,” Sanders said. “This one really seemingly captured the imagination of the nation. I think the social media and the cell phones have helped bring awareness, because the pictures are ugly and stark.”

With roughly 350 members, the Johnson County chapter of the League of Women Voters is one of the largest in the region. Jaramillo and Sanders noted that the League is working to make diversity, equity and inclusion a more intentional part of its mission and vision.

“I hope that folks leave realizing that self-reflection is a place to begin,” Jaramillo said. “I want them to be curious about the differences in many of us and how we can leverage those differences to become a better community, a better organization and a better nation.”