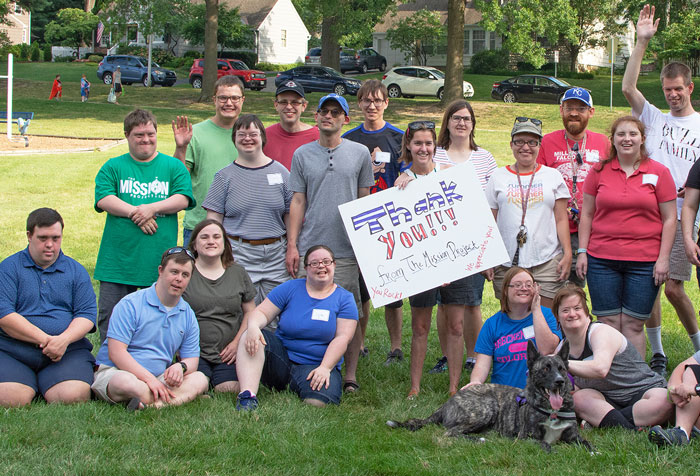 The Mission Project, a nonprofit that helps adults with intellectual and developmental disabilities live independently and safely, is among 63 midwest organizations receiving COVID-19 relief funding from the First National Bank of Omaha. File photo.

The Mission Project, a nonprofit that helps adults with intellectual and developmental disabilities live independently and safely, is among 63 midwest organizations receiving COVID-19 relief funding from the First National Bank of Omaha.

FNBO is providing nearly $1 million COVID-19 relief funds to organizations in Kansas, Nebraska, Colorado, Illinois, South Dakota and Texas. The second round of FNBO grants, such as The Mission Project’s $5,000 grant, is geared to support workforce stability, according to a press release.

The city of Roeland Park is searching for cute pets to enter its pet photo contest this September.

Photos will be judged by a panel of representatives from the community engagement committee, the governing body and city staff. Winning and non-winning photos may appear on Roeland Park’s print and digital media, according to a newsletter.

The city asks that photos be submitted via email to rppetpics@gmail.com by Sept. 27.

The AstraZeneca trial, which was set to include the University of Kansas and Children’s Mercy as sites, is on a “temporary hold” to determine if a side effect that a participant had was related to the vaccine, according to an Associated Press report. [AstraZeneca’s COVID-19 trial pause affects sites in Kansas City area — KSHB]

The Overland Park Fire Department is closing its annual 9/11 Memorial Service to the public this year due to concerns over the spread of COVID-19.

Unfortunately, we’ve decided it’s best to close this year’s 9/11 Ceremony to the public. However, honor guards will conduct the ceremony and we will live stream it for you to see. More details to come. #hateCOVID pic.twitter.com/96rZHQb0VO

“We’re trying to keep our commitment to the community,” said Fire Chief Bryan Dehner. “We feel the annual ceremony is an important tradition that we have vowed to keep alive, but to accomplish this and keep safe both those we serve and those who serve, we’ve made this difficult decision.”

The London House Apartments at 12801 Lord Nelson Drive caught fire Tuesday night, trapping some residents who needed to be rescued and treated for smoke inhalation. Preliminary damage estimates to the structure show it may cost more than $100,000 in repairs.

The Lenexa Fire Department responded to the fire with the Overland Park Fire Department and Johnson County Med-Act at 10:19 p.m., according to the city of Lenexa. Firefighters rescued four uninjured occupants who were trapped on a second-floor balcony and inside an apartment. Two first-floor occupants that had already evacuated were evaluated for smoke inhalation, and one of theme was taken to a local hospital for treatment.

The fire was confined to the first- and second-floor common hallways and was reported under control at 10:43 p.m. One cat was rescued during suppression operations and a second cat was removed uninjured after the fire.

Four apartments in the building sustained minor smoke and heat damage, and the fire was reported out at 11:12 p.m. Red Cross is providing assistance to 12 displaced residents. The cause of the fire is currently under investigation.