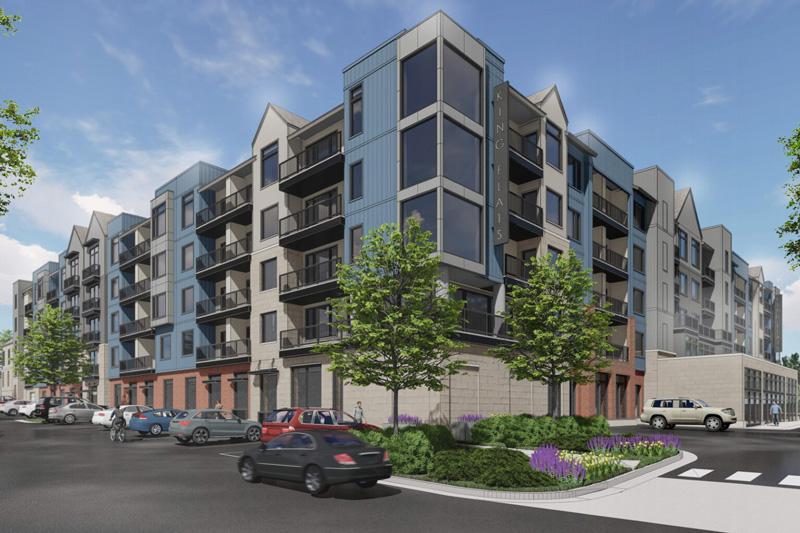 Located on West 57th Street between Flint and King streets, the 5700 King Apartments is comprised of 189 residential units on the site of the former Wonderscope Children's Museum.

The Shawnee Planning Commission on Wednesday unanimously agreed to recommend rezoning for an apartment complex coming to the site of the former Wonderscope Children’s Museum.

The decision to rezone from single-family residential to town square district came after more than three hours of discussion with the developer, Sunflower Development Group, and public comments from more than a dozen residents largely opposed to it.

Located just north of Splash Cove water park, the 5700 King Apartments is a proposed five-story structure with 189 residential units on four stories and parking on the ground floor.

Apartment units comprise a mix of studios, one- and two-bedroom units, ranging from 460 to 1,500 square feet. The apartment complex is also set to have a dog park, swimming pool, fire pit, greenhouse and other amenities.

Sunflower Development Group, which is building another project in Mission, changed some segments of the development over the summer, including:

“We believe that the historic downtown district is growing, and by providing additional living opportunities, this will only help further us grow up and energize the area,” said Jason Swords with Sunflower Development Group.

More than 60 residents showed up in person and sat spaced apart to accommodate social distancing on Wednesday night. City staff broadcast audio of the meeting through loudspeakers on the front steps of City Hall, where some residents gathered with signs showing opposition toward the project.

“It is a beautiful building, if it was on Nieman or somewhere away from residential, but it’s not; you’re putting it into a residential area,” said Cindy Hayth, a neighbor. “There are 20 of us that are basically within a street’s distance that we look out our door and we’re all going to see nothing but this monstrous building.”

While a few neighboring residents shared positive comments for the look and style of the apartment complex, nearly everyone who spoke was opposed to the project, particularly the scope and high density when compared with the neighborhood made up of mostly single-family homes.

Opposition to the development mirrors similar sentiments made by Shawnee residents toward other multi-family projects, such as Bellmont Promenade and Woodsonia (the latter is now the subject of a lawsuit with the city for denying the proposal).

Those in opposition cited the following concerns:

Here is a design rendering of the project from 57th Street: 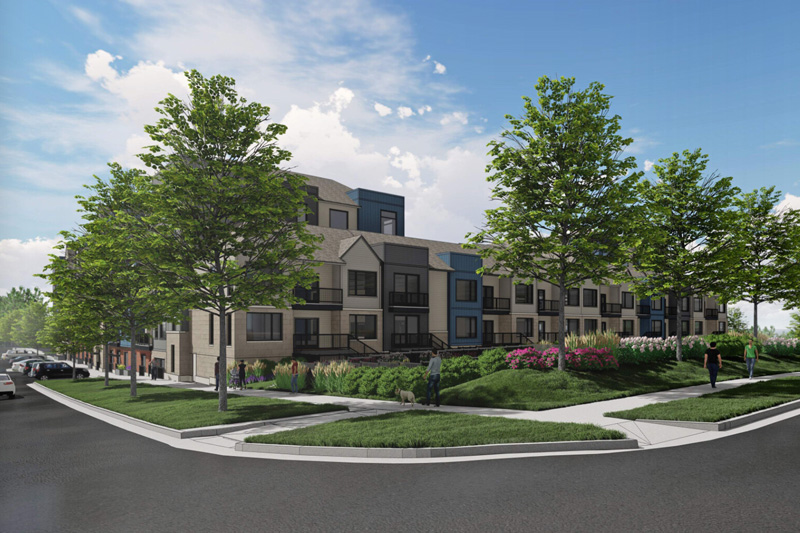 Because Sunflower proposed moving the apartment complex further south and removed some on-street parking, the developer is seeking to acquire a portion of public parking at Splash Cove. Some residents also opposed this.

At times, the conversation strayed from the development and turned toward the city’s vision of downtown Shawnee.

Meanwhile, business owners showed support for the project, some commenting that the higher density will attract more investment and revitalization of downtown and support their businesses.

Acknowledging their desire to consider the wishes of the neighbors, some commissioners said they wanted to send the message that Shawnee is welcome to developers seeking to invest in the community. Some commissioners concluded that residents want to attract restaurants, retail and businesses, but those things need higher residential density than what a bedroom community of single-family homes can offer.

“Shawnee, you’re better than that.”

Commissioner Randy Braley said there’s “a very real concern” that Shawnee has developed a negative reputation among developers, especially if the city rejects this apartment project.

“It is not lost on me the passion that the adjacent neighborhoods have for not having this project built,” Braley said. “But we have a greater community within Shawnee that is asking Shawnee to bring to them restaurants and entertainment and a more diverse housing product that we do not offer.”

Several residents showed general opposition toward any apartments being built in the city, saying they believe there are too many already. Commissioner Kathy Peterson rebutted those comments, saying that many young professionals, families with small children and active empty-nesters are looking for low-maintenance alternatives to homeownership.

“A lot of the comments that were made tonight were things like beautiful Shawnee, quiet, nice town, tranquil culture, it has a community feel, it’s charming,” Peterson said. “All of that spoke to the character of who we are and where we’ve been. Why can’t more people be a part of that nice town? Maybe they want the same thing.

“Why can’t we open our arms to others? The inference that putting an apartment complex next to a park or a kiddie pool is inferring that those people are less citizens than those that own property, to me that is insulting,” she said. “Shawnee, you’re better than that. If good really does start here, then start here.”

The planning commission also voted 10-1 to approve both a site plan and a preliminary plat for the project. Commissioner John Montgomery cast the dissenting vote, citing concerns with the high density.

Some commissioners took issue with the scope of the project, the smaller square footage of studio apartments and the number of proposed parking stalls, which totaled 111, or 1.3 stalls per dwelling unit. Swords said the development team plans to take into consideration these concerns and consider additional landscaping and greenery to screen the development from neighboring homes. He added that smaller apartments are trending in downtown Kansas City, Mo., and nationwide.

“I think that our team has done a good job of putting forth a plan that will fit well into the neighborhood and fit well into downtown Shawnee,” Swords said.

The Shawnee City Council will consider rezoning of the site Sept. 28.