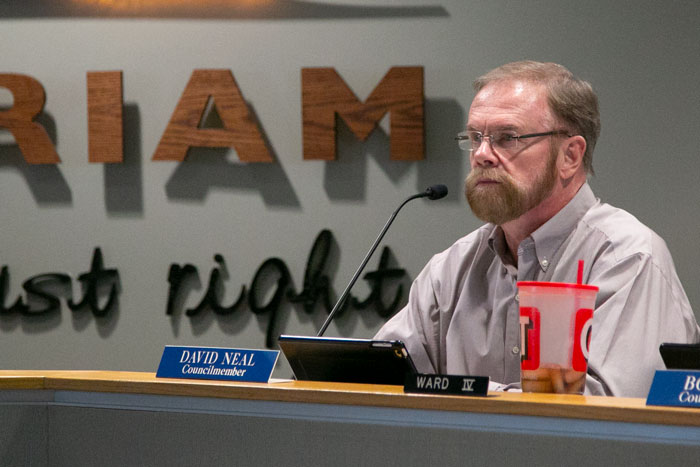 Ward 4 Councilmember David Neal said reasons for his recent absences vary from work-related to family health issues. Since the city moved to virtual meetings due to COVID-19, Neal has missed four of the last 12 meetings — three city council meetings and one three-hour budget work session.

Since the city moved to virtual meetings earlier this year due to the COVID-19 pandemic, Neal has missed four of the last 13 meetings, or roughly a third of all meetings. Neal was absent from the first virtual meeting April 13, then again for the July 13 and Aug. 10 city council meetings. He was also not at the July 20 budget work session.

Neal’s absence from the Aug. 10 meeting, in particular, led to a tense discussion at the Aug. 24 city council meeting, when some councilmembers expressed frustration at some of Neal’s questions about the mill levy rate, which had been discussed at the prior meeting Neal missed.

Neal said his absences have been caused by a variety of reasons, including work-related and family health issues. He and his family have been impacted by COVID-19 in a variety of ways, he told the Post, which has caused him to be unavailable and “deal with other things.”

“I have several reasons I was unable to be online at those particular moments,” Neal said. “It’s not something that I make a habit of doing, it’s under extraordinary circumstances — I take my role seriously.”

Neal also noted that up until the April 13 meeting — the first one conducted virtually amid the pandemic — he had never missed a meeting.

Additionally, he said expectations about attendance may differ from person to person depending on if it’s a resident, a city staff member or a fellow councilmember. Despite the differing opinions, Engel said — if he were to speak more generally — councilmember attendance is expected for the following reasons:

Neal’s Aug. 10 absence caused him to bring up a previously discussed topic at the Aug. 24 city council meeting: potentially lowering the mill levy rate. Neal suggested reducing the mill levy as residents suggested at the previous meeting, and Mayor Ken Sissom reiterated his Aug. 10 comments about why he was not in favor of rolling it back.

Councilmember Chris Evans Hands said following the three-hour July 20 budget work session and the same mill levy discussion on Aug. 10, she felt there was no need to further discuss it.

Neal apologized several times during the Aug. 24 meeting for missing the Aug. 10 meeting and the mill levy rate discussion.