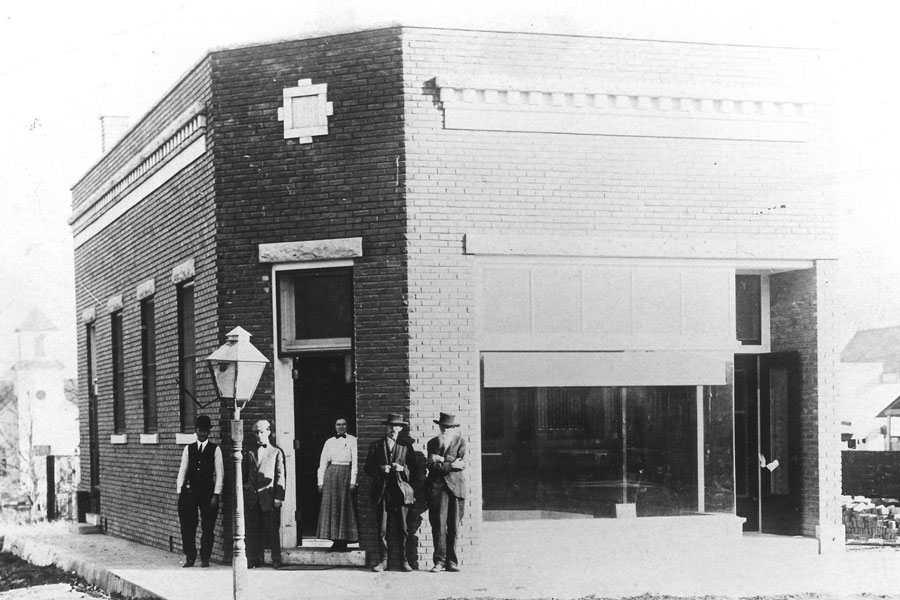 An image of the Historic State Bank of Stanley building from the early half of last century. Fire gutted the original wooden structure, and it was rebuilt with brick at 151st Street and Newton. Photo credit Overland Park Historical Society.

The Overland Park Historical Society is getting ready to sell the historic Stanley Bank building to raise money for the restoration of its new property in downtown Overland Park.

The society has asked the city to release a restrictive covenant that would allow the sale of the 1910 bank building at 151st Street and Newton Street. In a letter to city officials, Brad Moore, the society’s president, said the proceeds of the sale will be needed to make some major roof and heating system repairs on a building it recently purchased at 8001 Santa Fe Drive.

The new building — which was most recently a home decorations store — contains the 1906 Strang Line Depot within its bricked-over shell. Returning it to something close to its original state will require a major fund-raising campaign, which will start later, Moore said.

Meanwhile, the society would like to get the roof and HVAC systems repaired before winter.

The Historical Society has been using the Stanley Bank building as its Blue Valley location and has put exhibits there. But the site has not been as successful in attracting visitors from that area as the current office on 79th Street, officials said.

The Stanley Bank building dates back to an original wooden structure built in 1905 that burned and was replaced five years later. It was one of only a few buildings in the hamlet at the time. By 1996, when plans to widen the street put the building in danger, Overland Park and the Overland Park Heritage Foundation stepped in to save it. The bank was moved six blocks to its present location, and has been owned by the historical society since 2012.

Moore said a potential buyer has shown interest in the building.

Councilmember Curt Skoog noted the society’s role in saving the bank building and making it a useable space at a good location in Stanley. “I see this as a success,” he said.