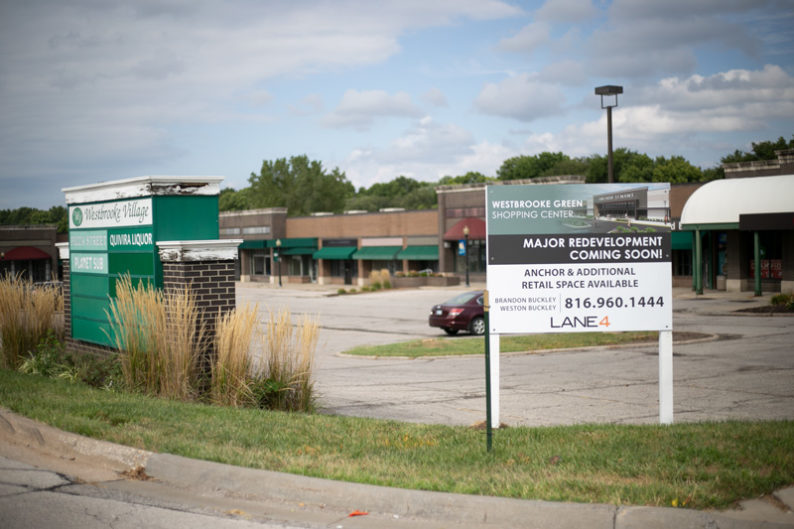 Westbrooke Green has new signage for the mixed-use project at 75th and Quivira in Shawnee.

Another tenant of Westbrooke Village, the now-derelict shopping center at 75th and Quivira in Shawnee, has closed its doors.

Developers of Westbrooke Green, a planned mixed-use residential/retail project for the site, said earlier this summer that they plan to begin construction this fall.

That was what was known two months ago, when Mission Peak Capital and NorthPoint Development responded to an inquiry from the Post regarding the status of the project, but the developers have not responded to more recent inquiries and last appeared at a city meeting at the beginning of March, a couple of weeks before the COVID-19 pandemic started.

Located on the site of Westbrooke Village, which is now partially demolished, the $113 million project consists of 343 residential units in four- and five-story apartments and a mix of commercial, retail and restaurant components.

New promotional signage recently appeared on the entrance to the development from 75th Street.

Some construction projects in the Shawnee Mission area have seen delays due to the COVID-19 pandemic, such as Mission Gateway on Johnson Drive and Veterans Park Senior Village on Pflumm Road. In the case of Westbrooke Green, it is unclear whether the pandemic has directly caused any delays in construction, though developers had indicated that work on the apartments would begin in late summer.

The city of Shawnee still has project details online. Julie Breithaupt, communications manager for the city, said the developer is “close to getting the building permit” from Shawnee.

Only a handful of shops and businesses remain in the center, including Mi Pueblito, Fantastic Sams, Bank of Labor, Walgreens and Q Liquor.

The old signage for Westbrooke Village at the entrances display a mix of other shops and restaurants, most of which are no longer open at the shopping center, including H&R Block, Planet Sub and the now-closed Pizza Street.