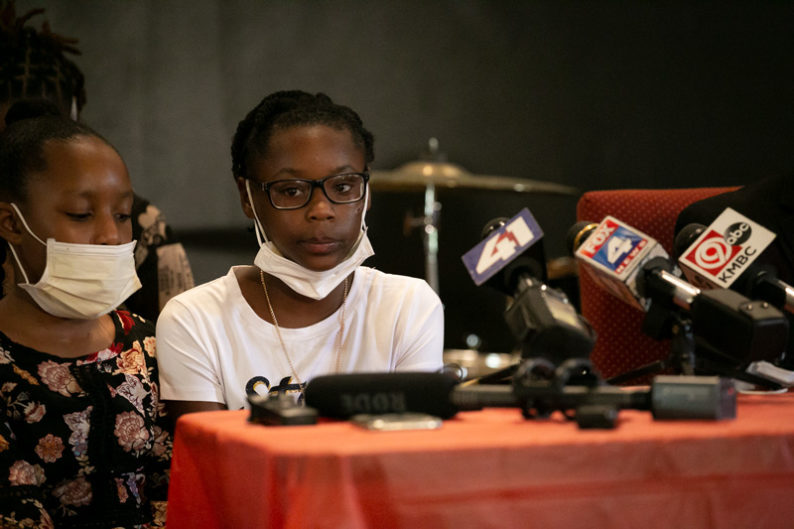 Nevaeh Thomas, an 11-year-old Black girl from Kansas City, Kansas, was attacked last week by a 12-year-old boy with suspected racial motivations. At a news conference Thursday afternoon, Nevaeh had messages of love, acceptance and anti-racism.

The family of Nevaeh Thomas, an 11-year-old Black girl from Kansas City, Kansas, and victim of a suspected racially-motivated attack by a 12-year-old white boy in Shawnee, came with messages of conviction: her attacker must be held accountable and receive equal treatment under the law.

At a news conference Thursday afternoon, the family, their church pastor and their attorney said they also seek to eradicate hate, racism and bigotry, for the sake of children like Nevaeh and the boy, and for the posterity of the United States.

“This little girl should be enjoying the bliss of childhood; instead, she has been put into the hatred and the reality of being a Black child in America, and the sad part is it gets worse as she gets older,” said Pastor Terry Bradshaw of Empowerment Temple, where the news conference took place. “It is time for America and even right here in the state of Kansas, we deal with not just the coronavirus, because that’s not the most deadly virus. It is bigotry, racism and hatred that is still running rampant and killing us.

“We are sick and tired of being sick and tired. We will stand with Nevaeh and we will not be quiet. We want a complete conviction.”

Major Jim Baker with the Shawnee Police Department said officers took the suspect into custody an hour and seven minutes after the officers were first dispatched to the call. La Ronna Lassiter Saunders, the family’s attorney, said the family pleaded with Shawnee Police for more than two hours for an arrest before the boy was taken into custody.

A spokesperson with the Johnson County District Attorney’s Office confirmed that the boy is charged with aggravated battery, a felony. He is currently on house arrest. Nevaeh’s family and supporters argued that a Black child would have been sent to jail.

The Shawnee Police Department determined in its incident report that the boy had no motivations of hate or bias, a point refuted by Nevaeh’s family and attorney.

Nevaeh and her family shared their account of the attack, which gave her a concussion and split open her cheek. She lost a tooth and needed eight stitches.

On Friday, Aug. 28, Nevaeh was playing with her friends outside the Park 67 Apartment complex near Nieman Elementary, when a 12-year-old boy who lived in the complex started yelling racial slurs at the girls. All of the girls are Black. The boy is white. Nevaeh’s mother said Nevaeh had never met the boy before.

Nevaeh and other witnesses said the boy left the scene, returned with a knife and began threatening the girls. He left again and returned with a steel pole and swung it at Nevaeh, hitting her in the head. The blow knocked her unconscious for three minutes.

Juveniles are not named in police reports, and the Shawnee Mission Post could not reach the boy’s family for comment.

“All I wanted to say about this is that we need to stop this hated racism,” Nevaeh said. “It’s wrong, and it’s wrong to hurt people with words and weapons.”

Nevaeh said she thinks children should come together and talk about racism.

“It’s OK if we’re different or we have different opinions, but it’s not OK to hate and judge each other on their color and skin,” Nevaeh added. “I think we should start talking about these things before another kid gets hurt because of their skin color.”

The family’s attorney, Lassiter Saunders, asked for those who know about the proceedings, convictions and sentencing of similar juvenile cases to share that information.

“We don’t want this forum to be about fanning the flames of hatred and division,” she said. “That’s not going to get us anywhere (in) America. We have to come together and find positive solutions. Do we want our kids bearing the burden of our hatred, our racism, hurting each other over the adults’ issues? That’s not the America we want to live in.”

‘My Black is beautiful’

The family said the boy lashed out after Nevaeh said, “My Black is beautiful.”

“Had.. things got out of hand even more, then what would be the outcome? My granddaughter would not be here,” said Kendra Dean Martin, Nevaeh’s grandmother. “Yes, we are grateful that she is still amongst us. But we want justice for Nevaeh, and we want it in a manner that you would give any other person.”

Nevaeh’s mother, Brandi Stewart, and grandparents Kendra Dean and Malcom X Martin, said they wanted the boy to receive equal treatment as any other person who had committed the same offense. The family also demands that the boy’s father be held accountable for what happened.

Finally, they also hope the boy will receive some sort of rehabilitation, so he can understand the severity of his actions and find healing.

“You know what’s sad? There’s still 12-year-old racists,” said Malcom X Martin. “When you think it’s over, it ain’t over.”

For her part, Navaeh says she is now organizing a walk for children to demonstrate love, anti-racism and community. The date and location will be announced later.