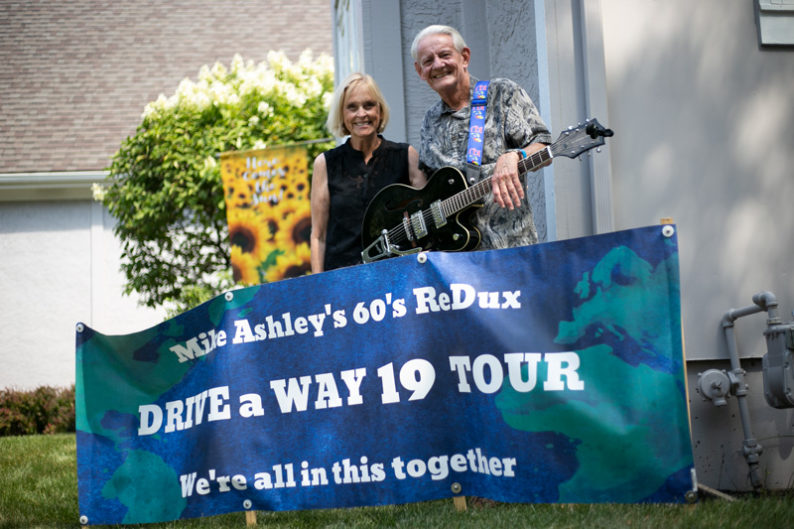 Mike Ashley and his wife, Durinda.

Mike Ashley has been playing music since 1960, at first piano, saxophone and clarinet. When he taught himself to play guitar, he started playing in a variety of bands in his college days and later on. Two of those local bands include The Fibrons as well as Zero and the Positives.

He particularly enjoys playing cover songs from the 1950s and ‘60s and has performed in dozens (if not hundreds) of gigs in his lifetime: In cafes and bars, for Sunday school music, live entertainment for dances, parties, showcases, charities. Some of those gigs are in Nashville, where his daughters live.

Then the COVID-19 pandemic hit, and life ground to a halt. So, at the suggestion of a neighbor, Ashley started playing songs in his driveway. That first concert at the end of March drew such a big crowd in his neighborhood and “went bacterial” (not quite viral, he joked) on Facebook, that now he and his wife of 50 years, Durinda Ashley, started taking requests for more concerts. They’ve had about 35 total and another 20 scheduled — all free of charge. Ashley plans to play elsewhere in Kansas and Missouri as well as Iowa, Illinois, Colorado and Wyoming.

Born in Kansas City, Kansas, and raised in Chanute, Ashley earned a psychology degree at the University of Kansas and led a career in insurance. Eventually, he branched off with his wife for their own insurance agency, Senior Benefits Consultants Inc., in 1990. They specialized in long-term care insurance and now consider themselves semi-retired. He spends much of his time playing music and spending time with family.

The Ashleys live in Prairie Village. They have three adult children — a son and twin daughters — three granddaughters and one granddog.

I tell people, this is the most fun I’ve ever had doing music, what we’re doing right now.

At the suggestion of a neighbor, we set out my equipment in our own driveway and invited all the neighbors, they invited some friends. We played for a couple of hours out there. And people were able to safe distance.

And we had so many positive comments about it, people were talking to their neighbors and being able to be out of their houses and had such a good time, we did another one, and with the same results.

We is just me — I’m a one man band. I play guitar, I sing, and I also use some back tracks. So with our daughter Meridith here live-streaming it, we had lots of people that were making comments as it was going on and sending me messages and notes and things about would you want to come to my neighborhood? I live in Florida, would you want to come down here? So on and so forth.

So we just started doing that, and it just kept growing and growing. We’re getting calls almost every day from people who want to do it. We’ve got a lot of people who are now doing this for a second time already.

Up as far as Maryville, Missouri, Liberty, Kansas City, Missouri.

Sometimes we set up in somebody’s actual driveway, or by their garage. And the people set up out in the yard, some across the street, some down a couple of houses. Depending on the setup, we set up at the base of a cul-de-sac. Sometimes people have it in their backyard. Whatever works best.

These are oldies. I do some songs that people typically like to sing along with. We’ve had people get up and dance also.

This is music where people I would say between the ages of 60 and 80 right now, was their high school, college, music. This is memorabilia stuff for them.

You know how you’ll always know the music of your high school, college years. This is the same thing, except this music seems to have persevered longer than a lot of it. It’s Beatles, it’s Elvis, it’s Buddy Holly, the Bee Gees and The Beach Boys, all of that.

I usually finish it up with “Sweet Caroline” because people always like to sing to that one. I tell people, I say, usually I get a request for this about 11 o’clock at night after everybody’s been at the bar a long time and they think they can sing, that kind of thing (laughs).

We’ve just been overwhelmed with the positive response we’ve got. We know some of the people in the crowd, and we’ve met so many new people, though, through this. Because while I’m playing, Durinda’s out talking to them. We’ve just made so many new friends.

People are so joyful and happy. They just feel good. The one thing that people have said most is this was like a breath of fresh air in a bad time.

We’ve been stuck indoors not doing stuff. Get out, sit out, listen to the music we love. They’ve said this has just been great. And it’s not because I’m so great. It’s just the experience of it.

We were playing one up here the other day, I was playing The Beach Boys and I look down the street and there’s some lady a block away down in front of her house dancing (laughs). And people walking by or driving by will stop and listen.

I don’t know, it’s been an amazing experience for us.