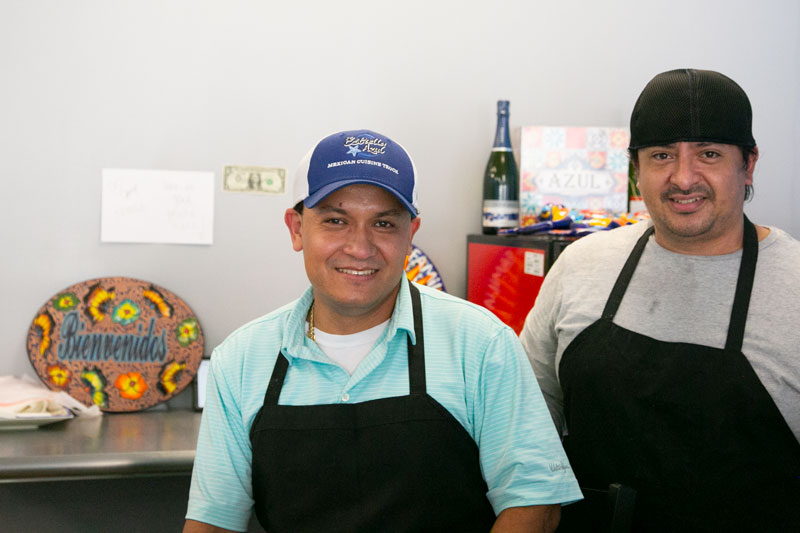 Isael Herrera, left, has opened an Estrella Azul restaurant at 6011 Johnson Drive in downtown Mission. Estrella Azul began as a food truck in 2016, and the truck will still be in service for private events.

Over the past four years, Estrella Azul has become known as a Mexican cuisine food truck in the Kansas City metropolitan area. Now, its owner has opened a storefront restaurant.

Isael Herrera, Estrella Azul’s owner and head cook, recently opened up shop at 6011 Johnson Drive in downtown Mission. While he’s focused on the quality of food produced at both the restaurant and food truck, he said his main priority is building a relationship with customers and making them happy.

“It makes me so excited when someone says, ‘you make great food’ or ‘I love your food,’” Herrera said. “That’s my passion, to make people happy. Good quality, good servers and a good relationship with customers is the most important.”

Estrella Azul serves a variety of Mexican dishes including tacos, tortas and burritos. Although Herrera’s personal favorites include tacos or steak and chicken nachos, he’s still serving up a customer food truck favorite: chilaquiles, a traditional Mexican dish of cut up corn tortillas that are  lightly fried and dipped in salsa.

“We thought it was going to be weird making chilaquiles in a food truck, it’s crazy,” Herrera said. “But no, it was really good. One time we took it off the menu and [customers said], ‘You need to put it back.’”

Herrera started the food truck in 2016 and has been looking for a restaurant space for some time. Estrella Azul’s food truck frequently stopped at the Mission Market, the city’s summertime farmers market, allowing Herrera to become familiar with the area and customers.

Once the storefront on Johnson Drive formerly occupied by a bakery opened up, Herrera said he jumped on the space because he likes the neighborhood and has good rapport with the city. The food truck’s presence at the Mission Market is not forgotten by city staff, either.

“We are so excited to welcome Estrella Azul to their new storefront in downtown Mission,” said Emily Randel, assistant to the city administrator. “They have been a longtime food truck favorite at the Mission Market, and I know a lot of people will be glad to have them in town on a permanent basis.”

Herrera says Estrella Azul’s restaurant is implementing all necessary COVID-19 safety measures, including requiring masks, social distancing and frequent sanitizing. Opening during a pandemic has had its ups and downs, but Herrera said he and staff remain hopeful.

The restaurant is open seven days a week at 11 a.m., and closes at 8 p.m., Monday through Saturday, and at 6 p.m. on Sundays. A menu can be found online here. The food truck will still operate for private events such as weddings, office lunches and birthday parties.