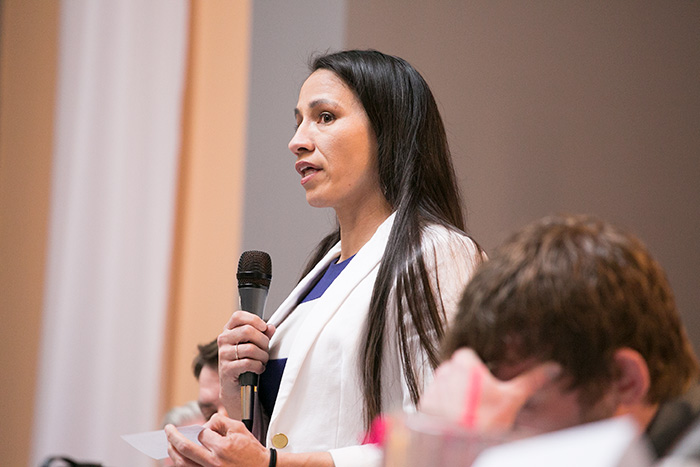 The U.S. Chamber of Commerce has endorsed Rep. Sharice Davids in her campaign for re-election to the Kansas Third Congressional District. File photo.

The U.S. Chamber of Commerce, a conservative-leaning national business group, has endorsed Kansas Democratic Rep. Sharice Davids for re-election. In its report on the endorsement, The Kansas City Star noted that the chamber spent $200,000 against Davids in 2018 when she challenged incumbent Republican Kevin Yoder.

In a letter Tuesday afternoon informing her of the endorsement, the chamber cited her support for the USMCA trade agreement with Canada and Mexico as among the reasons for the endorsement.

“In challenging times, we are reminded of the importance of having leaders who understand the genius of the American system of government and free enterprise and who are willing to tackle the hard problems that confront our nation,” said Thomas J. Donohue, chief executive officer of the chamber, in the letter.

Davids said in a statement that she was “proud to be endorsed by the U.S. Chamber for my work to support our small businesses, pass a strong trade deal to create good Kansas jobs, and rebuild our economy back stronger than before.”

Adkins’s campaign countered with a statement, called Davids’s agenda as “extreme” and “pro-tax.”

“I wish Sen. Wagle would change her mind and decide to have it in the Senate chamber because it’s appropriate because that’s where he worked,” Hensley said.

Wagle cited social distancing concerns as a reason not to have the memorial at the chamber, Hensley said.

The city of Merriam is still taking resident feedback for its 2040 comprehensive plan.

Residents can use this interactive website to engage with the comprehensive plan process and provide the city with feedback. Specific feedback topics include housing preferences, parks and downtown enhancements.

More information about the Merriam Comprehensive Plan 2020 itself can be found here.