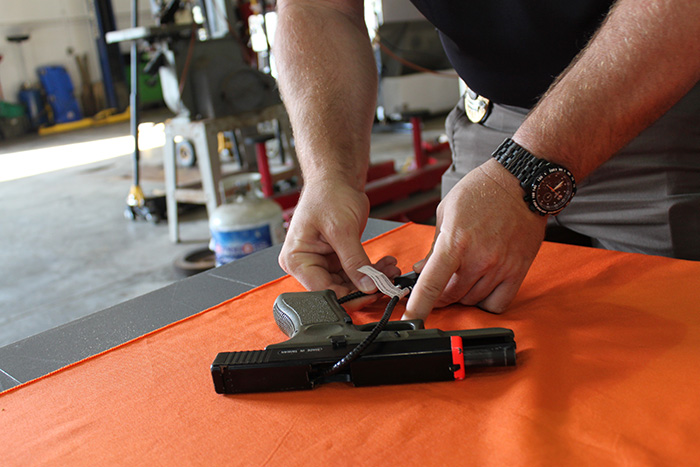 An offense has occurred when discharge or firing a firearm is intentional or reckless, which would include unintentional or accidental discharge, as clarified by a recently approved amendment to the Lenexa city code. File photo.

The Lenexa City Council on Tuesday voted 7-0 to approve an amendment to the city code that defines unlawful discharge of a firearm. Councilmember Julie Sayers was absent.

The amendment makes clear that intentional or reckless discharging of a firearm within the city limits is unlawful.

In a presentation to the city council, Deputy City Attorney MacKenzie Harvison said the current section of city code is “silent” on the issue of intent, particularly when an unintentional discharge or firing of a firearm has occurred. This has created uncertainty on whether Lenexa can charge someone in municipal court for such an incident.

One recent example occurred in April, when a firearm discharged in an apartment complex and went into a neighboring unit. The gun owner was cleaning his firearm at the time, and a bullet was in the chamber.

“The police department in that instance desired to charge that individual under city code but was unable to do so because there wasn’t specific intent to fire the firearm,” Harvison said.

The amendment clarifies that an offense has occurred when discharge or firing a firearm is “intentional or reckless, which would include unintentional or accidental discharge,” according to a city memo.

“An individual deciding to clean their firearm while it’s loaded, that behavior, in our opinion, we feel comfortable that we could charge that and prove that that meets the definition of reckless,” Harvison said.

Before the council voted, Mayor Mike Boehm raised some concerns with some of the repetitive terms of “unlawful” in the new language. However, he said he fully supported the intent of clarifying the city code in this area. He suggested tabling it to allow time to clarify the language.

Harvison said she thinks adding too much additional language could weaken the intention of the code.

Other councilmembers had some clarifying questions but also shared their support for the change, particularly because it allows police officers to exercise discretion in accidental shooting incidents.

“I think that… any case of an unintentional firing or discharge of a firearm would be reckless in the city limits,” said Councilmember Corey Hunt. Lenexa resident Joe Quinn, a Republican precinct committeeman, also took issue with the phrasing of the amendment. He argued that accidents be kept separate from reckless incidents in the city code.

Harvison said this amendment allows Lenexa police officers to use their discretion to determine whether an offense has occurred because someone was being reckless or unintentional in firing a firearm.

Two members of Moms Demand Action were present but made no public comments.