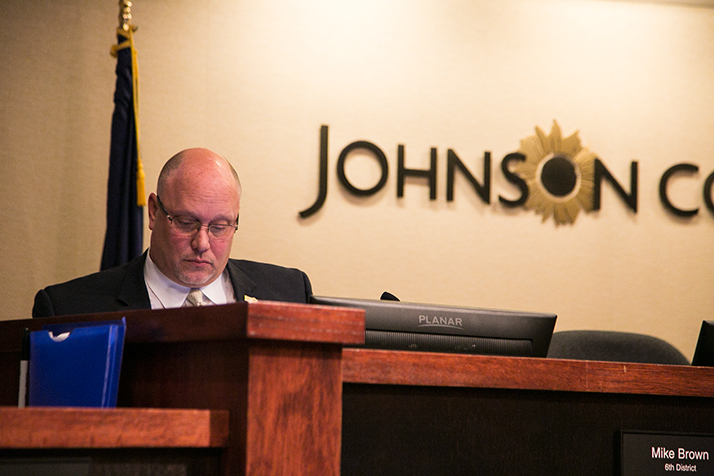 Incumbent 6th District county Commissioner Mike Brown has totaled $1,915 in anonymous donations through crowdfunding site GoFundMe, but what he does with that money will determine whether he has violated state campaign finance law.

Johnson County Commissioner Mike Brown has taken the unusual step of adding a GoFundMe account to his re-election fundraising arsenal this year. In so doing, he has received $1,915 of apparently anonymous donations — above the amount allowed by Kansas law.

How Brown deals with that money will determine whether he has violated campaign finance rules. According to officials at the Kansas Governmental Ethics Commission, anonymous money in excess of the state limits cannot be used.

But GoFundMe, a crowd funding website, is a relatively new wrinkle in campaign finance. Mark Skoglund, executive director of the ethics commission, said his office has seen a few such instances of crowdfunding before.

GoFundMe allows anonymous donations, but in some cases makes the contributors’ names available to candidates so they can be listed on financial forms, he wrote in an email. If a candidate knows the source, the name must be reported, regardless of whether the “anonymous” button on GoFundMe was checked, he said.

In the case of anonymous donations over the state limit, Skoglund says, “If the recipient does not know the source, and a contribution is made from an anonymous source over the allowable anonymous limits, this would be a violation of the campaign finance act.”

In that case, the candidate would be advised to refund the full amount or, if the contributor was unknown, donate it to a non-political charity.

Fines for violation range from $5,000 to $15,000, although most of the time the errors are inadvertent and the ethics commission seeks only to set things right, he said.

Neither Brown nor his campaign treasurer, Maria Holiday of Overland Park, responded to repeated phone calls and an email request for comment from the Post for this story.

Brown’s GoFundMe account was launched Aug. 16, about two weeks after the most recent campaign disclosures were due. According to the website, he has raised $5,390 of his $10,000 goal. The site listed eight contributions as anonymous, who gave donations ranging from $25 to $1,000. Four of the donations listed as anonymous were $100 or more.

Kansas law limits the amount of anonymous donations at the county commission level to $10 individually and no more than $250 in aggregate.

Raising money through crowdfunding sites like GoFundMe is still fairly uncommon among local politicians. A search of the site didn’t turn up any other Johnson County Commission candidates using it this year or in 2018.

Brown’s challenger, Shirley Allenbrand, said she thinks of GoFundMe primarily as a site where people raise money to help others in trouble — money for an expensive medical procedure or relief after a disaster, like a house fire —and not as a campaign tool.

“I think it’s a fundraising account for somebody who has lost somebody,” she said.

But Allenbrand does use another online tool, RaisetheMoney.com, to process contributions from people who don’t want to write checks. Raise The Money is useful, she said, because it provides an easy way to pass along money from people to donate online, but it doesn’t work the same way as GoFundMe. Raise The Money does have a crowdfunding section, but according to its website, it’s to build networks of supporters raising money.

All eyes on the sixth district

If the amount of money being raised is any indication, the race for the sixth district between Brown and Allenbrand is the hot ticket on the county commission this year. Three seats on the seven-member county commission are on the ballot this fall, but a money-raising chasm has opened up between the sixth district competitors and the other two races.

Now that the most recent financial reports, due at the end of July, have been posted, it’s clear the sixth, which includes Olathe, Gardner, Edgerton and a swath of rural south and western Johnson County, has sparked the most interest. During that reporting period, Allenbrand outraised the incumbent Brown, collecting $29,650 in donations, compared to Brown’s $17,317.

But Brown had more cash on hand from the previous campaign — $23,899 to Allenbrand’s $1,000. Brown reported $19,783 in spending, which was about twice as much as Allenbrand for the period.

Both candidates reported large numbers of supporters contributing the $500 maximum amount allowable from individuals, but Allenbrand had more of those. Of her 153 contributors, 119 gave $500. For Brown, it was 23 donors out of 70 total.

Allenbrand said her contributor list includes people from many walks of life. “There are a lot of people I don’t even know who reached out to me,” she said. The high-profile ones are in many cases friends and associates she’s made in her years in the nursing home business.

Brown, who has a long background as a builder and construction consultant, showed numerous contributors also in construction services, development or property management.

Absent from either contributor list was anything overtly from a political party. Brown objected to Democratic Party involvement in some races last year and has said he would push for the commission contests to become partisan when the county charter is reviewed next year.

The commission has been in the spotlight this year with many heated discussions on reopening during the pandemic and mask mandates. Even so, there has been far less fundraising action for the second and third district seats, and neither of them has an incumbent seeking re-election.

Barely any money at all has been raised or spent in the second district, which includes northwestern Johnson County and the Shawnee area. Commissioner Jim Allen is not running for another term there.

Former Shawnee Mayor Jeff Meyers and small business owner Robert Patterson are on the ballot for that seat. Combined, they reported only $100 raised for the most recent reporting period. All of that was reported by Meyers. Patterson reported zero dollars raised or spent.

Meyers said he was reluctant to ask for money when people have been hit by the pandemic. The lack of a primary also made him late into fundraising, he said. But now that election season is approaching, Meyers said his fundraising has picked up. He declined to share how much he’s raised since July, but said people now seem much more interested in his race.

Patterson did not respond to requests for comment about his campaign spending.

In the third district, which includes southern and central part of the county and Blue Valley, Stacy Obringer-Varhall and Charlotte O’Hara are running to replace Commissioner Steve Klika, who is not running for re-election.

In that race, Obringer-Varhall, currently on the Blue Valley school board, has raised more than twice as much as O’Hara —$14,700 to $5,773. Her donors include $2,000 from herself plus contributions from a variety of others.

O’Hara, a real estate investor and former Kansas state representative, logged $3,523 in contributions from herself. She said she has been trying to keep a grassroots campaign as she goes door to door.

“We’re trying to be extremely efficient with our dollars,” she said. “We’ve got to find efficiencies because people are hurting out there.”