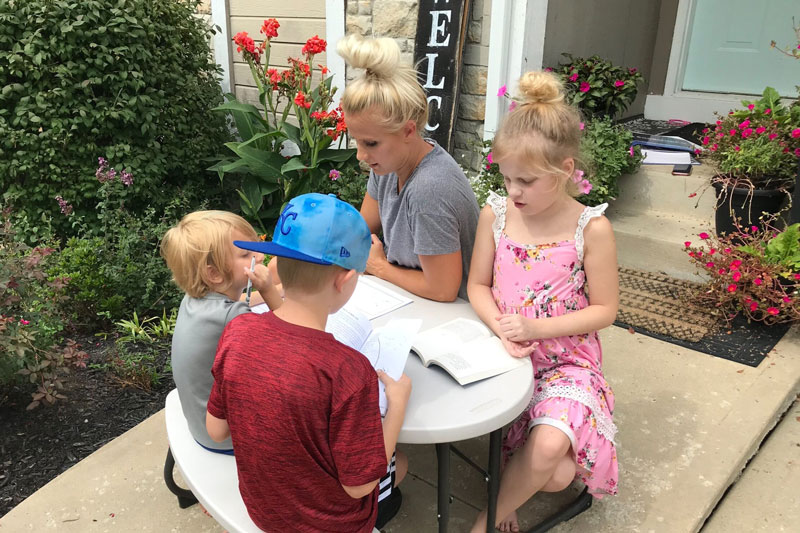 By Anne Kniggendorf, freelance reporter with The Beacon

Taryn Pierce of Shawnee, Kansas decided at the beginning of August to make a big change: She’d remove her three school-aged children, ages 5, 8 and 10, from public school.

When the pandemic forced their elementary school in Shawnee to close in March, Pierce realized that a household of six — she also lives with her husband and toddler — afforded few quiet places.

Though her children each had school-issued iPads, finding spots for them to concentrate on learning or to meet with teachers during synchronous learning sessions was a major challenge. Thinking forward to the fall semester, Pierce said she really wanted to be involved with each child’s daily work.

“I didn’t feel like I could do that successfully with all three of them in school this year,” she said. “I decided that we would homeschool, take on a new adventure.”

National homeschooling organizations are reporting a massive rise in interest in home education since March, when many schools closed and several states issued stay-at-home orders.

Jamie Gaddy, editor-in-chief of Homeschool.com, said her website has seen 300% more traffic than this time last year. Charyti Jackson at Families for Home Education in Missouri, the largest homeschooling organization in the state, said her group’s workshop attendance skyrocketed from 250 in 2019 to 1,400 participants over the same five-month period this year, from March through July.

Even as schools begin to open, little is certain about how long they’ll operate under the model they chose to begin the year with: face-to-face learning, 100% remote learning or some combination of the two.

But if the rise in interest in Gaddy and Jackson’s websites is an indicator, the estimated number of children who are homeschooled could — at minimum — double this year with the pandemic.

Homeschooling statistics are next to impossible to generate because each state has its own requirements, and no centralized national database tracks students who are taught at home. Even prepandemic estimates varied widely: The National Home Education Research Institute reported that 2.5 million children in grades K-12 are homeschooled, while Gaddy estimates the figure is closer to 4 million.

Neither Kansas nor Missouri regulates, monitors or collects data on homeschooling.

Aside from the wide variance in how states oversee homeschooling, another reason experts say numbers are difficult to pin down is the nebulous nature of what defines homeschooling. Rachel Coleman, the executive director of the Coalition for Responsible Home Education, said that homeschooling is an umbrella term.

From the inception of modern homeschooling, models have included correspondence programs where students send in work or programs that pair videos with assignments. Others might be enrolled in a type of virtual schooling that makes students part of a private school system. And now, across Kansas City and the nation, public schooling will largely be taught online to children sitting in their homes.

“A lot of what is going on is homeschool adjacent but is in some ways substantively different from homeschooling, because the parent is not choosing to do it, with the other option being to send their kid to school in normal times,” Coleman said.

The Attraction of Homeschooling

One major appeal of home education is its flexibility — particularly now as guardians juggle their own changing work schedules with the instability of the classroom.

Jackson, at Families for Home Education, said that one school district in eastern Missouri has seen 20% of its students unenrolled by parents. That is the highest number she’s heard of, but the concerns those parents come to her with are similar to those from districts that have lost fewer children to homeschooling.

For families like the Pierces, the rigidity of the screen time required by their public school would have interrupted the toddler’s naps, her husband’s virtual meetings or activities Pierce has planned.

Jackson explained that the goal of homeschooling is never to reproduce the in-school model where children sit for seven hours a day.

“We live life and they learn as we do life,” she said. “After a while, it’s kind of second nature, you don’t really think about this as an educational opportunity, you just do it to be doing it because they’re learning stuff.”

Pierce spent the summer searching for the right curriculum. She has nothing against online learning — she teaches English to children in China every morning before her family wakes up.

“I knew if I wasn’t going to do the virtual (model through the district), then I didn’t want to do any online type of homeschool — all hands-on,” Pierce said.

Unenrolling her children was simple. Pierce wrote a letter to her school’s principal and filled out a state form. Homeschooling a child under the age of 7 doesn’t require documentation.

“Kansas has a really easygoing homeschool process,” Pierce said. “I didn’t even have to have proof of homeschooling for my kindergartner.”

For as many models of homeschooling that exist, there are just as many reasons that families choose that way of learning. But, Coleman said, the bottom line is that if something about a family’s current school experience is causing conflict or discomfort, changing models is worth a look.

Holly Owen had been curious about homeschooling for years before switching seven years ago. She lives in Independence, Missouri, with her husband, daughter and son. Her daughter’s transition into middle school in sixth grade was what pushed her to educate at home.

“The teachers didn’t seem to have control over their classes,” Owen said. “There were no repercussions on how some kids treated others; bullying was a huge issue at that middle school.”

Owen spoke with co-workers who were already homeschooling, researched curricula and state requirements, and withdrew her daughter before seventh grade by writing a letter to her district’s superintendent and her school’s principal — only the letter to the superintendent was required.

Her son, on the other hand, was quite a bit younger and had never attended public school. Owen didn’t have to write any sort of letter when she decided to homeschool him and still hasn’t years later.

“I was so glad that with the majority of our school, it didn’t affect us,” she said of the start of the pandemic. “We just kept doing what we did.”

The Owen family participates in one of several learning co-ops in Kansas City, which Owen said range from a free model where every parent takes a turn teaching a course — the model she uses — to something closer to a private school with fees, a certified teacher and a set of weekly lessons that must be turned back into that teacher. A co-op learning model is usually just one day of in-person class a week.

Owen’s group was concerned that with the rise in interest in homeschooling, they would see a sudden influx of people asking for admittance to their co-op. Instead, the opposite has happened.

Some families opted out because they were concerned about in-person meetings, and others cited unwillingness to participate in masking requirements. Even with the addition of new people, Owen said that of the three courses she teaches, each is down by a third from last year.

“We live life and they learn as we do life.” — Charyti Jackson, Families for Home Education

‘A time for joy and adventure’

Jackson said that as parents consider unenrolling their children from a traditional school, they need to carefully check state requirements, especially for high schoolers, as high schools aren’t obligated to accept homeschool credits.

“Because the public school would be issuing the diploma, they want to make sure those kids have actually completed what they say they’ve done, so a lot of times we tell parents to talk to their district and figure out if their district will accept them,” Jackson said.

Homeschool.com’s Gaddy explained that the homeschooling parent must keep a careful account of everything the child learns — especially if that student is college-bound.

“The only thing different with a homeschool high school transcript is that colleges like to see course descriptions because they’re not the run-of-the-mill same as all the public school courses,” Gaddy said.

A transcript would also include internships and apprenticeships the student completed. Gaddy insisted, though, that homeschooling is largely just a matter of acclimating to something new.

“It might look daunting at first glance, but when you really get into it, homeschooling can be a time of joy and adventure and wonderful experiences with your children,” she said. “So just embrace it and have a good time.”