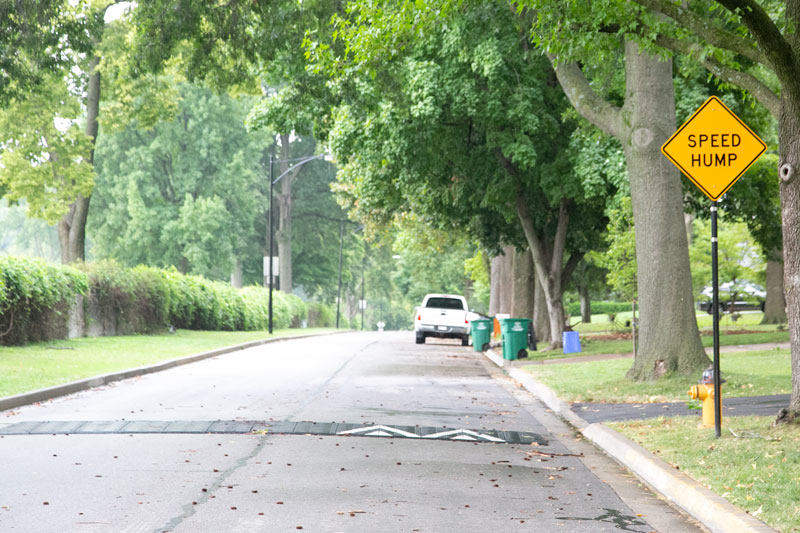 Fairway will consider swapping out the three speed humps along Belinder Road, such as the one pictured above, for five permanent speed humps.

The city of Fairway on Sept. 14 will consider the installation of five permanent speed humps along Belinder Road, south of Shawnee Mission Parkway.

The three temporary speed humps — placed on the road after speeding was identified as a problem based on studies dating back to 2017 — have not resulted in substantial improvement and actually increased speed in some areas, City Administrator Nathan Nogelmeier said.

To improve the effectiveness of the traffic calming effort, the city is following city engineering reports and best practices recommendations to space speed humps 500 feet apart.  This means the city will increase the number of speed humps to five, since Belinder Road is an approximate 3,000-linear-foot street.

Since the city does not have five temporary speed humps, it was decided to move forward with a permanent speed hump installation, Nogelmeier said.

“For the most part, people are very supportive of it,” Nogelmeier said. “You’re never going to have 100% on something like this, but the overwhelming majority of the people who have reached out to the city have been in support of the installation.”

Fairway did hold a town hall meeting to discuss the issue on Aug. 26 and by in large, the majority of the public was in favor, he said.

Those who were against permanent speed bumps expressed concern with the signage that comes along with it, Nogelmeier said. Others, particularly the street’s residents, said they felt it’s not neighborhood motorists speeding but rather people using the road as a thoroughfare.

“We hope the city of Fairway will choose other methods to calm traffic and enhance safety on our street,” Moriarty said.

The city also reconfigured the island where Belinder Road and State Line Road meet back in 2018. Temporary vertical deflectors were installed in an attempt to redirect traffic, and Nogelmeier said the city has seen a significant impact on slowing down traffic as a result.

Nogelmeier said those who wish to keep up with the Belinder Road speed humps can tune into the Sept. 14 city council meeting, where the city council will consider a contract for installation. Information about the meeting can will be uploaded on the city’s website here.