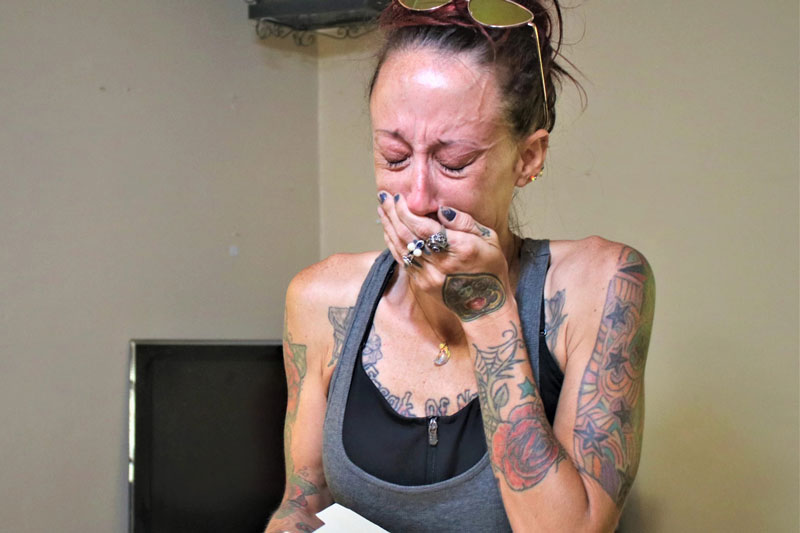 Sheena Mooney, lost her job at the start of the coronavirus pandemic in March, reacting to being evicted from her Topeka rental home. Photo credit Jim McLean/KCUR.

TOPEKA, Kansas — As many as 40 million Americans – including 357,000 Kansans – face the risk of eviction in the next several months.

An enhanced federal unemployment benefit of $600 a week that expired at the end of July helped people who lost jobs because of the COVID-19 pandemic cover basic living expenses, like rent and mortgage payments.

But a recent report from the Aspen Institute says that because Congress hasn’t extended those larger jobless checks, the country could soon see an unprecedented wave of evictions and foreclosures.

Hundreds of thousands of Kansans could be at risk, said Donna Ginther, an economist with the Institute for Policy and Social Research at the University of Kansas.

“We need to understand that this (the pandemic) is a natural disaster,” Ginther said.

In a recent report, Ginther said the lapse of the Coronavirus Aid, Relief and Economic Assistance — or CARES Act — is “compounding a crisis that is already terrible.”

“The federal government is playing with fire right now,” she said. “If those benefits aren’t restored, you’re going to see a lot of hardship and deprivation.”

Sheena Mooney, of Topeka, has already experienced it. She lost her janitorial job in March, fell behind on her rent and last week was evicted from her house.

“It’s my home,” Mooney said as friends helped her pack up her belongings. “It’s so hard, you have no idea.”

Mooney applied for unemployment but was told she didn’t qualify. So, her eviction wasn’t triggered by the loss of federal benefits.

It was approved by the Shawnee County District Court between the May 26 expiration of Gov. Laura Kelly’s initial order barring evictions and mortgage foreclosures and Aug. 17, when her new order took effect.

With Congress stalled on a new coronavirus relief package, Kelly announced last week that the state would apply to participate in a stop-gap Trump administration program to boost unemployment benefits by $400 a week.

In a statement, Kelly said using federal disaster relief funds to temporarily increase benefits to jobless Kansas is “far from a perfect solution.” But she said the program “is the only available option for additional federal assistance at this time.”

In recent testimony to a legislative committee monitoring the economic impact of the pandemic, Kansas Secretary of Labor Ryan Wright said he was reluctant to participate in the program because it would take “several weeks” to reprogram the agency’s decades-old-computer system to process the payments. Plus, he said, the $44 billion earmarked for the program isn’t expected to last long.

“What we’ve been told … is that we should only plan on three weeks of dedicated funding,” Wright said.

More than 415,000 Kansans have filed for unemployment since mid-March.

Bracing for the “inevitable”

Teresa Baker helps people avoid financial calamities like foreclosure, eviction and bankruptcy as a counselor at Topeka’s Housing and Credit Counseling, Inc. She’s been anticipating a sharp increase in people seeking assistance since pandemic-related business closures threw tens of thousands of Kansans out of work in mid-March.

It hasn’t happened yet, she said, because the enhanced unemployment benefits have allowed people to scrape by. But she said a housing crisis looks inevitable if Washington doesn’t extend the benefits.

People fearing eviction, Baker said, should contact their landlord and attempt to work out a partial payment plan. If that’s not possible, agree to vacate their home or apartment before they’re evicted.

“We don’t want to see people legally evicted,” Baker said, because that puts a negative mark on their credit record “that’s going to make it harder for them to rent in the future.”

Kelly’s moratorium on evictions and foreclosures remains in effect until Sept. 15. She can’t extend it beyond that date unless the Kansas Legislature renews her emergency powers.

“No Kansan should be kicked out of their home during the pandemic,” Kelly said when announcing the order. “That’s just wrong.”

Vince Munoz, an organizer for the Rent Zero Kansas coalition, argues in an opinion piece in The Kansas Reflector that state or federal lawmakers need to cancel rent and mortgage payments all together until a vaccine capable of ending the pandemic is widely available.

Steve Vogel, the head of the Shawnee County Landlords Association, said the governor’s temporary moratorium is warranted. But he said cancelling or suspending rent payments for the duration of the pandemic would financially cripple scores of small businesses across the state.

“Most of the landlords that I know of, especially if they have very many properties, have acquired those properties with borrowed money,” Vogel said. “They have mortgages to pay.”

Vogel owns 13 rental properties in the Topeka area. He says landlords are generally willing to work with tenants to avoid evictions, which he says are “a last resort.”

“No landlord that I know or have ever met wants to do an eviction,” he said. “It’s heartbreaking to go through that.”

Kelly has said her administration is also looking for ways to help landlords.

Jim McLean is the senior correspondent for the Kansas News Service, a collaboration of KCUR, Kansas Public Radio, KMUW and High Plains Public Radio focused on the health and well-being of Kansans, their communities and civic life. You can reach him on Twitter @jmcleanks or email jim (at) kcur (dot) org.