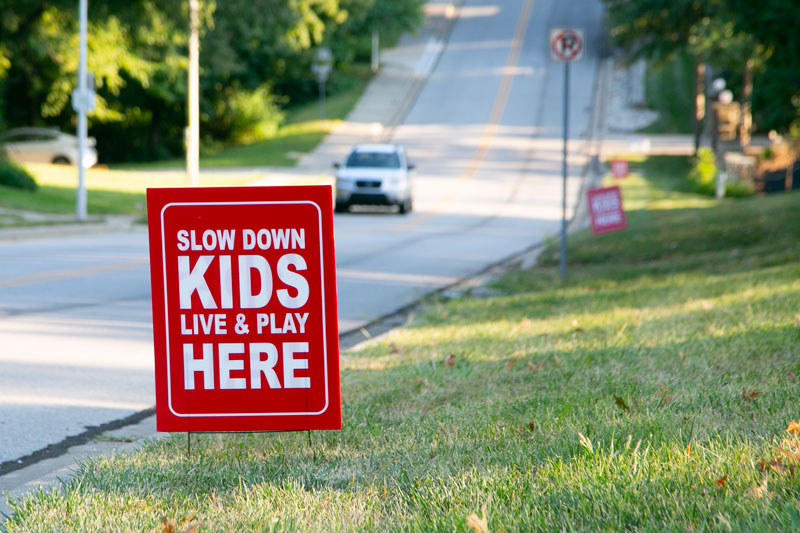 An organized group of 14 Merriam residents submitted a letter to the city calling for traffic calming measures along Knox Avenue between 55th Street and Johnson Drive. Some residents have also placed the above signs in their yards.

A group of Merriam residents last week asked the city to work alongside them for traffic calming measures along Knox Avenue between Johnson Drive and 55th Street.

The group of residents submitted a letter for public comment during the Aug. 24 city council meeting to express frustration with speeding on Knox. The 14 residents acknowledged the city’s 2019 and 2020 speed and traffic studies, which came to the conclusion that not enough people were speeding to merit a four-way stop sign at the intersection of Knox Avenue and 57th Street.

The residents said they don’t think the traffic studies accounted for situational context such as Knox Avenue’s hilly topography. The residents also expressed their frustration with one particular city response that “it is common for residents to think cars are going much faster than they actually are.”

“We don’t accept gaslighting as an appropriate response for these safety concerns, we are a level headed bunch,” the letter reads. “We understand government processes. We know that the city follows traffic recommendations and safety standards. We know that Knox will always be busy, because it was designed for traffic as a major thoroughfare like Johnson Drive.”

Residents along Knox Avenue from Hocker Drive to 56th Terrace have placed yard signs reading “slow down, kids live and play here.” Additionally, the residents said they hope the city will take them seriously and work together “before a preventable tragedy occurs.”

The governing body did not address the resident group’s letter during the city council meeting. City officials did not immediately respond to requests for comment for this story.