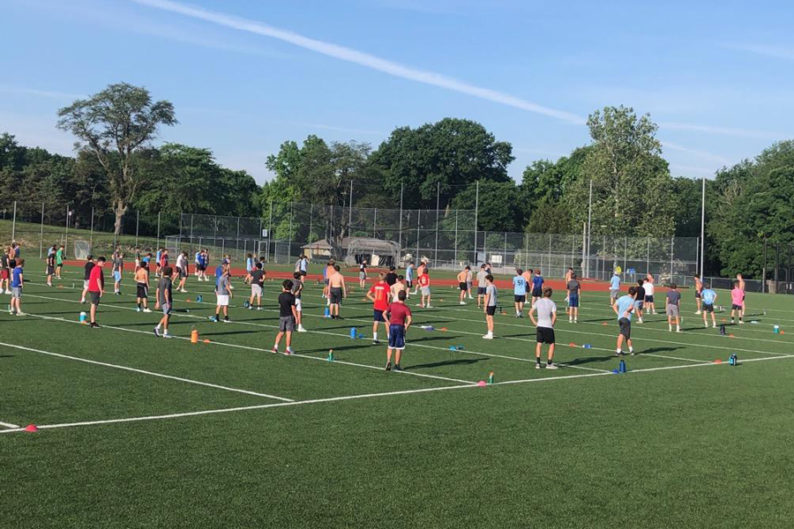 On Friday, the Kansas High School Activities Association cleared the way for schools across the state to be able to move fall sports to the spring if they cannot be conducted this fall due to the continuing spread of COVID-19.

By a 53-21 vote, KSHSAA’s Board of Directors approved an “alternative season,” giving schools and districts the chance to move sports scheduled to be carried out in the fall of 2020 to the spring of 2021 instead.

Still, Shawnee Mission Schools officials say they hope fall activities can go forward as planned, though they’ve yet to make a formal decision with the start of classes looming Sept. 8.

“We want to have a season, and we want to have it now,” said Richard Kramer, the district’s director of athletics and activities, at last Monday’s Board of Education meeting. “Our first goal is to have fall sports in the fall.”

Parents and players plead for sports

Parents like Rusty Mudgett hope that happens. A father of three children enrolled at Shawnee Mission Northwest High school — an incoming freshman, junior and senior — Mudgett said his children are desperate to play this fall as currently planned.

“They said to me, ‘Dad, we’ve come too far, worked too hard, for it to end like this,'” Mudgett told the board of education last week during public comments.

As Mudgett spoke that night, a crowd numbering in the hundreds stood outside the district’s Center for Academic Achievement, holding up signs with messages like, “Let Them Play.” Several dozen high school boys wearing their football jerseys were part of the demonstration.

All student sports and activities in Shawnee Mission remain suspended as the district prepares for the start of classes with all roughly 27,000 students set to learn remotely. On Friday, Superintendent Mike Fulton sent an email to parents, informing them the district was close to finalizing a plan to bring back elementary students for in-person learning.

Mudgett pleaded with the board last week that even if classes remain online for now, sports and activities should be restarted.

“Put the decision to play back into the hands of players, parents and coaches,” he said. “Let them decide the risks versus the rewards, as they’ve always done.”

Superintendent Mike Fulton echoed Mudgett’s sentiment. He noted that his own four children — all now adults — benefited from high school sports and activities. It allowed some of his children to attend college on scholarship, giving them an opportunity to go to a school they otherwise may not have been able to afford, he said.

“Believe me, I get it. I think we all get it,” Fulton said. “We know how important those sports and extracurriculars are for kids. But we also have to do what’s right for community health.”

Conducting sports during the COVID-19 pandemic, so far, has proven challenging for schools across Johnson County.

Before sports were suspended indefinitely, Shawnee Mission halted summer workouts and conditioning multiple times because of positive COVID-19 cases this summer. In Blue Valley, one high school’s entire football team was put under a 14-day quarantine earlier this month after three people connected to the team tested positive for the disease. And in Roeland Park, Bishop Miege’s six-time defending state champion football team also was placed in quarantine last week and its summer practices halted after five players tested positive.

Kramer called the plan for an “alternative” spring season for fall sports approved last week by KSHSAA “solid.” He said it provides a good option for sports like football, soccer and volleyball.

“It will allow our kids to have a competitive season at an alternative time,” he told the board last week.

KSHSAA’s plan approved Friday splits high schools around the state into two groups — a large-school group consisting of schools in the 6A and 5A classes, and a smaller-school group in Class 4A and lower. All five Shawnee Mission high school fall into the large school group.

If a majority of schools in each grouping decides to cancel fall sports this fall, it would automatically trigger a move for all the schools in the grouping to move to the “alternative” spring schedule.

If fall sports are moved to the spring, there would be no state-level championships for those sports. In addition, fall sports rescheduled for the spring would have fewer competitions than they would normally have in the fall.

The move to spring would also likely create conflicts for student-athletes who play multiple sports. KSHSAA’s plan has traditional fall sports and activities overlapping with spring ones for more than three weeks in March, which would likely force some students to pick one or the other.

Two other fall activities — debate and Scholar Bowl — are set for now to go forward with fall schedules as normal but with all competitions conducted virtually.

Here is a brief breakdown of what an “alternative” spring season would look for fall sport affected by KSHSAA’s plan: