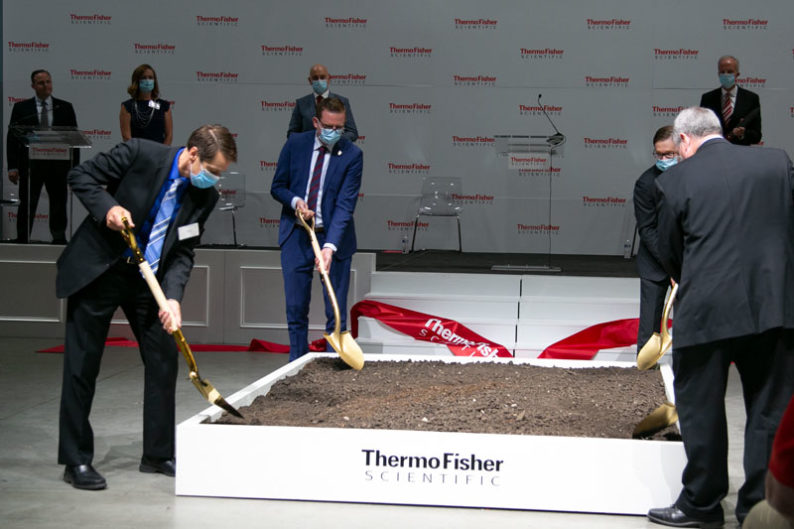 Thermo Fisher Scientific Inc., a biotechnology company, Friday morning celebrated the opening of its new Lenexa facility, which is aimed at boosting production and manufacturing of COVID-19 testing supplies.

Several elected officials, including Kansas Gov. Laura Kelly, attended the ceremonial ribbon-cutting for the $40 million facility. Kelly said Thermo Fisher built it out from an empty shell in just six weeks and that it will play a critical role in the state’s COVID-19 testing strategy.

“We are in a pandemic, time is of the essence,” Kelly said. “Thermo Fisher stepped up and really responded very quickly, that’s just the Kansas way.”

The Lenexa facility is dedicated to producing viral transport media, VTM, which are used to safely collect and transport COVID-19 samples to labs for testing.  Thermo Fisher received a federal contract in May to ramp up its weekly 1 million VTM production to 8 million VTM a week, said Bret Johnson, Thermo Fisher’s vice president of global operations for specialty diagnostics.

Thermo Fisher embarked on the expansion of the Lenexa facility with 120,000 square feet of manufacturing space because its former facility was out of space, Johnson said.

Thermo Fisher is involved in all parts of the COVID-19 testing process, he said, and the Lenexa facility furthers the company’s efforts to support testing nationwide.

“As we think about our company’s mission around enabling our customers to make the world healthier and cleaner and safer, we view this as really a critical part of helping to stem the pandemic,” Johnson said. “Getting people back to work, getting people back to school and really doing our part in helping society.”

More than 300 new employees have been hired to work at the new facility, and Thermo Fisher is working to hire people for 300 additional roles, Johnson said.

Additionally, Johnson said the company is now launching what it calls “phase two” of its expansion, an investment in the Lenexa facility and a way “to create capacity for the fight against COVID-19.”

Republican U.S. Sen. Jerry Moran said he wants the state to be proud of what it has to offer the nation, including Thermo Fisher’s recent efforts. Moran said the company is leading the way to get toward something much closer to normal amid COVID-19.

“This is not just important to Lenexa, to Johnson County or even just to Kansas,” Moran said. “Thermo Fisher’s expansion, this facility, and its future plans here in Kansas, it’s response to COVID-19 means we are taking care of the world.”