Though Johnson County's mask order — based on Kansas Gov. Laura Kelly's statewide directive — is in effect until at least Sept. 15, some prominent county officials have been seen in public not wearing masks. Above, a screenshot of the Aug. 27 Board of County Commissioners meeting shows commissioners Steve Klika and Mike Brown not wearing masks.

Community spread of the coronavirus has caused a recent uptick in new COVID-19 cases in Johnson County, according to county health data, adding new urgency to efforts to get the virus under control even as public schools prepare to reopen for the fall and many businesses seek to bring workers and customers back.

That has some county leaders weighing in on their personal responsibility to model healthy behavior by wearing masks in public. Yet, there are concerns that some prominent county officials are not themselves following mask-wearing recommendations, though county health officials say masks are most effective when widely used.

Johnson County’s mask order — based on Kansas Gov. Laura Kelly’s statewide directive — is in effect until at least Sept. 15, but Sheriff Cal Hayden along with some county commissioners are often seen in public without a mask and seemingly not in compliance with the mandate.

Ed Eilert, chairman of Johnson County Board of County Commissioners, said he thinks it’s elected officials’ responsibility to comply with the mask order “to the fullest extent.”

“I think it’s important that all of us, and especially elected officials who are having to make decisions impacting individual lives, individual businesses and the community at large,” Eilert said.

Eilert said when he is outside of his home, his office at the county administration building or around others, he wears his mask.

Commissioners Mike Brown and Steve Klika have been seen in recent weeks not wearing masks during commission meetings, although some modifications were made to the hearing room prior to in-person meetings being resumed on June 11, including plexiglass partitions between the commissioners, sanitizing stations and limited audience seating.

Meanwhile, Hayden has been seen multiple times at public events not wearing a mask while also appearing to be in close physical proximity to others.

Later, the Adkins’ campaign said an attendee at the party tested positive for COVID-19, prompting the candidate and her family to get tested and self-quarantine for 14 days. Adkins and her family tested negative, according to her campaign.

Neither the Johnson County Sheriff’s Office nor Sheriff Hayden responded to multiple requests for comment for this story. County Commissioners Brown and Klika also did not respond to repeated inquiries.

The spread of the virus can be controlled in the community if 95% to 100% of the public wears masks, Areola said. Additionally, he said masks are most likely to reduce the spread of COVID-19 “when they are widely used by people in public settings.”

“Masks work,” Areola said. “They are by far the best tool currently available to public health to control this virus.”

Areola said mitigating the spread of COVID-19 can be done when masks are coupled with other preventative measures such as social distancing, handwashing and frequently disinfecting high-touch surfaces.

With universities and some Johnson County school districts opening up, Eilert said the county is keeping its fingers crossed that things go well and it is “not faced with a surge in positive cases.”

“Wearing a mask and taking those other steps are important if we’re going to make progress in mitigating the spread,” Eilert said. “We do not want to go back to more severe situations, and by doing those things, hopefully it keeps us from having to take a step backwards.”

County Commissioner Janeé Hanzlick said she strongly supports wearing masks and physical distancing and is always sure herself to wear a mask during commission meetings. She said she’s heard from residents, particularly those with pre-existing health issues, who do not feel they can or should attend commission meetings in person.

Hanzlick said those who have reached out are concerned for their safety, and “believe some commissioners value the input of some residents over others.”

She said something that may not be taken into consideration by all officials is the impact decisions and actions have on residents’ feelings about accessing their government.

“Whatever their personal or political opinions about masks are, commissioners and other elected officials have a responsibility to ensure that everyone feels safe and respected coming into the county facility,” Hanzlick said.

Additionally, Hanzlick said not wearing a mask sends the message that elected officials are not respecting resident concerns about their health and their access to speak before the board.

Commissioner Jim Allen said he follows the science on mask-wearing and also believes masks and other preventative measures make a difference. Allen said thousands of emails he and other commissioners have received about COVID-19, particularly about masks and so-called “gating criteria” for reopening schools and businesses, show there are people on each end of the spectrum.

Allen said he knows a lot of people have been tuning into the commission meetings lately, and it’s important for him to wear a mask since he, as an elected official, voted in favor of the mask mandate in Johnson County.

“I think you have to set an example,” Allen said. “Even on our dais, where probably [masks] are not required because they have the six-foot separation and then they have the panel in between.”

Overland Park resident Melissa Carlson recently sent the Board of County Commissioners and Sheriff Hayden a letter “to protest inconsistency in the efforts” of some county officials to control COVID-19.

In her letter, Carlson urged county officials to wear a mask, and said those who argue against it based on rights should “take the high ground.” She specifically mentioned the images of Sheriff Hayden at the Adkins watch party.

“I am insulted, personally, and on behalf of all people who diligently follow science-supported advice to keep myself and my neighbors safe,” Carlson said in her letter. “We are doing our part and we expect elected officials to do theirs.” 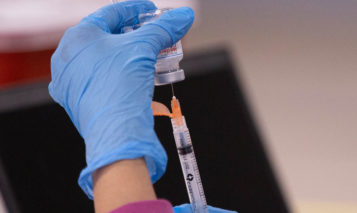