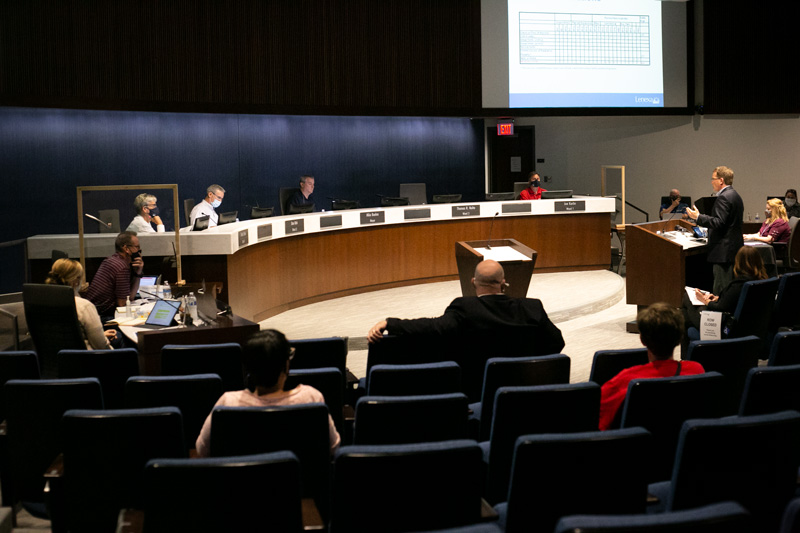 The Lenexa City Council on Tuesday began discussions to draft zoning regulations for homeless shelters within the city.

Although the meeting agenda was set up to focus on the intricacies of land use — defining where the city could allow homeless shelters — much of the night’s discussion centered around broader philosophical questions about the city’s and county’s need to address homelessness.

The meeting also marked the first time the city council met in person with members of Shawnee Mission Unitarian Universalist Church as well as Project 1020, a cold-weather homeless shelter for single adults in Johnson County.

The meeting comes months after the church sued Lenexa in federal court over the city’s rejection of the church’s request to host Project 1020 last winter.

While no action was taken Tuesday, city leaders shared their support for developing policies they say will create a path for homeless shelters to operate in Lenexa. Some members of Project 1020 expressed skepticism, however, citing a similar dispute in Olathe.

Lenexa city councilmembers said they want to be deliberate and methodical in developing regulations for homeless shelters.

“I definitely have legitimate concerns about taking care of our homeless population. That is obviously a concern of all of us, so we need to make sure… that we do it right, but I also have concerns about taking care of our residents who live here in Lenexa,” said Councilmember Mandy Stuke. “We need to do the right thing, and doing the right thing sometimes takes time.”

The lawsuit cut off public dialogue for a time, and discussion was further delayed this spring by the COVID-19 pandemic.

Due to the delay, the city has already approved allowing Project 1020 to open at Shawnee Mission Unitarian Universalist Church this coming winter.

Support for countywide approach to homelessness

Many councilmembers said they would support taking the lead alongside Johnson County leaders on a regional or countywide approach to address homelessness — particularly in light of the economic crisis and job layoffs brought on by the COVID-19 pandemic, which is expected to exacerbate evictions and homelessness in the region.

“This isn’t just a Lenexa issue: This is a county issue, this is a nationwide issue,” Stuke said, citing her strong interest to learn more about any plans or approaches by Johnson County.

“One of the real values of Lenexa is we do lead; I do want to take a leadership role in this as a city,” added Councilmember Dan Roh, echoing some of Stuke’s comments. “However, I want the county sitting in the front seat with us. I don’t want to run down this highway by ourselves. It just doesn’t feel right.”

Scott McCullough, community development director for the city, said city staff is unaware of any formal projects at the county level to address homelessness. There are, however, discussions with the Johnson County Continuum of Care on Homelessness, a coalition of groups working on homelessness issues.

Councilmember Corey Hunt said he appreciates that the city is having these discussions, but he was frustrated with how the city reached this point. In comments after the meeting, he said that was a reference to the lawsuit with the church.

‘It’s a temporary home and family’

At Tuesday’s meeting, a dozen people shared their perspectives, most of them in support for allowing homeless shelters to operate in Lenexa, including Rev. Rose Schwab of the Shawnee Mission Unitarian Universalist Church, and Barb McEver, founder of Project 1020.

“There’s a community there; we actually get to know the people and care about the people we serve,” McEver said. “Project 1020 is not just a sterile drop-in shelter. For many of our guests, it’s a temporary home and family. It provides a human connection for guests with each other and with the volunteers, a connection that gives them hope that tomorrow will be a better day.”

Other church leaders came out in support of offering homeless ministries, and some city leaders said they were open to a faith-based approach to organizing services for homeless people.

Some Lenexa residents raised concerns, however, including Lanette Wickham, a business owner, and Kevin Transue. They said they supported plans to help homeless people have access to shelter and services but questioned putting shelters in residential areas, citing public safety concerns.

Their comments reflect the results of a recent survey of Lenexa residents, who generally opposed placing shelters in residential areas.

Councilmember Courtney Eiterich said she would consider supporting homeless shelter plans that operate 24/7 in order to allow a place for guests to stay during the day. She said she hoped this would prevent loitering, among other concerns.

In the city staff’s proposal, a homeless shelter would be defined in city code as: “A building operated by a public, publicly funded, nonprofit, charitable organization, church, or place of worship that provides day and/or overnight shelter to one or more persons who lack a fixed, regular, and adequate nighttime residence.”

Staff proposed the following information for locations of homeless shelters in Lenexa:

City councilmembers said they supported creating flexible zoning regulations for homeless shelters, taking into account the nature and standards of a shelter’s operation, actual capacity of a facility that could accommodate more than 10 guests, as well as the character of a proposed shelter’s surroundings.

Mayor Mike Boehm and city staff also suggested that rezoning applications could be on the table for homeless shelters seeking to operate in the city.

Jim Schmidt, one of the lead members of Project 1020, raised concerns about the special use permit process, noting that Olathe took a similar path and ultimately prohibited the shelter from operating.

McEver said capping a church’s capacity to serve no more than 10 homeless guests would be inhumane.

“Sometimes I think maybe when you get into the statistics, you forget that we’re talking about people and people’s lives,” McEver said. “I don’t think we should be treating the issue as though we’re separating out the rotten apples from the good ones, discarding them. Each number is a human life, so each reduction in service to push them aside neglects another human being.”

City staff is also developing supplementary use regulations for homeless shelters that would include things like an emergency/security plan, codes of conduct for guests, staffing plans (including ratios for staff/volunteers to guests) and transportation.

The city council expects to have several meetings and opportunities for public input before finalizing regulations for homeless shelters.