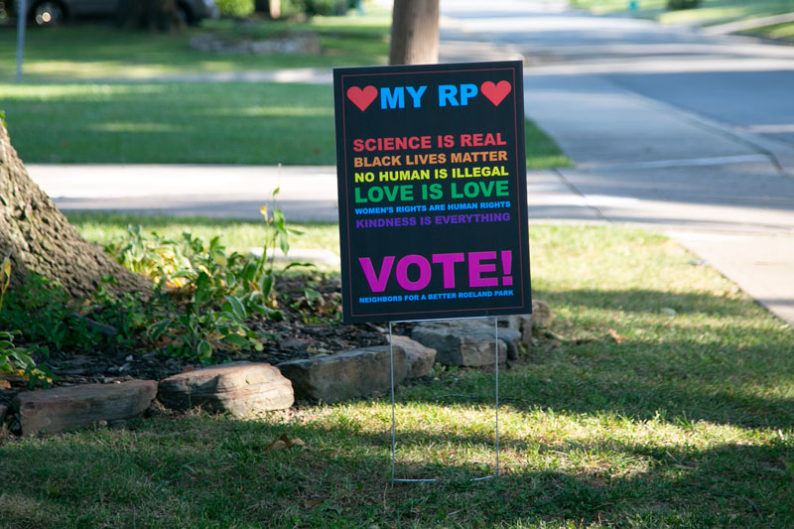 Jennifer Dembowski recently purchased a home in Roeland Park, influenced by seeing the above signs in many yards throughout the neighborhood.

As Jennifer Dembowski drove through Roeland Park to look at what is now her new home, she noticed — and was impressed by — dozens of yard signs.

Not all of the yard signs were the same, and not every yard had one. But Dembowski said many yards had a particular sign that meant a lot to her family: the Neighbors for a Better Roeland Park sign which features phrases like “Black Lives Matter” and “no human is illegal.”

‘A place that we would fit in’

Dembowski said the signs influenced her decision to move to the neighborhood, so much so that she continued to look for back-up houses in the area as the sale of her home was pending.

“It just felt like a place that we would fit in, and that would be welcoming to the same kinds of things that we find important,” Dembowski said.

Shea Geist, member of Neighbors for a Better Roeland Park, said the idea for the signs came from the desire to show the city’s kindness and support for neighbors. It’s not a completely original design, but Geist said the “MY RP” portion is a statement from homeowners that want the following values to be seen throughout the city:

Originally, Geist said the group ordered 75 signs and hoped to find enough people who were interested in putting one in their yard. The group asked for $10 donations to cover printing costs. Those 75 signs were gone in days.

“That just makes me want to cry with happiness,” Geist said. “That’s the kind of person we want to move to Roeland Park, to come here and be here. Someone who is inspired by our sense of community.”

After ordering the signs, Geist said the group realized it did not mention the Roeland Park Police Department “that is so valuable to our community.” The group is working on finding a way to honor the police department, Geist said, as “it should be a model for police departments everywhere.”

A limited number of yard signs are still available for Roeland Park residents, and can be requested through a Google form here. Information on how to make donations can also be found in the Google form.