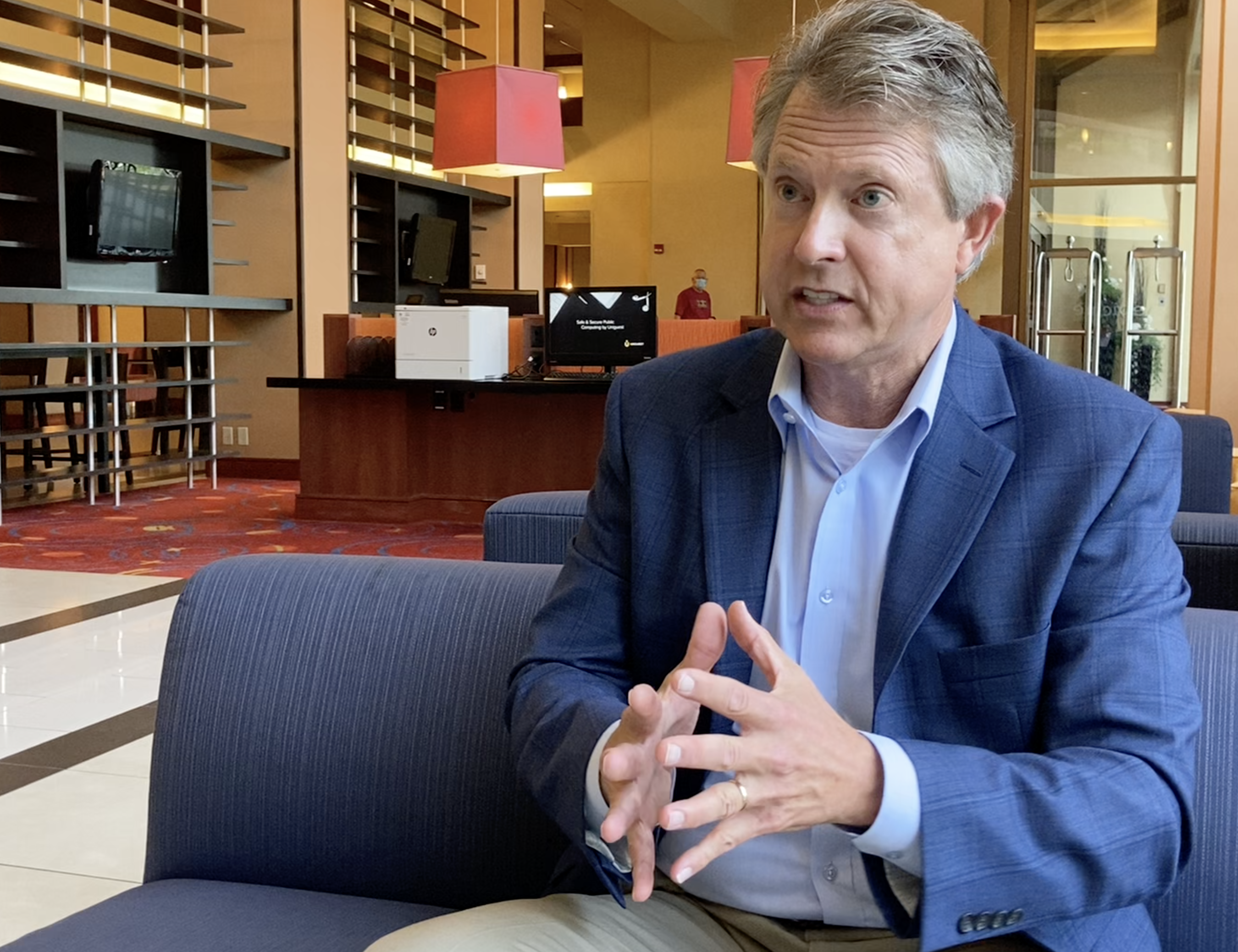 The Supreme Court on Friday rejected a Texas lawsuit that tried to overturn the presidential election results from four battleground states. The lawsuit had support from soon-to-be U.S. Sen. Roger Marshall and about 125 other House Republicans, as well as Kansas Attorney General Derek Schmidt. File photo.

The Post reached out to the campaign of Republican U.S. Congressman Roger Marshall for an interview after we interviewed his opponent, Democratic Kansas state Sen. Barbara Bollier, last week. It’s part of the Post’s mission to facilitate direct communication between candidates and the citizens who they aim to represent, especially during an election season. We will continue to pursue opportunities to talk to candidates directly, including Barbara Bollier and Roger Marshall again, on behalf of our readers leading up to November.

U.S. Rep. Roger Marshall was in the Kansas City area this week, making a series of campaign stops and official visits. He won the Republican primary for U.S. Senate earlier this month in a crowded field, and he now faces Democratic state Sen. Barbara Bollier in November’s general election. The Post talked with Bollier last week before a campaign stop in Kansas City, Kansas.

Post Editor Kyle Palmer sat down with Marshall in the lobby of the Marriott hotel in Overland Park on Tuesday, Aug. 25, as Marshall was between engagements.

Below is a video of the interview, followed by a condensed transcript with timestamps.

Post: You represent Kansas’ 1st Congressional District in western Kansas, but what are your connections to Johnson County?

[00:14] Marshall: I spent medical school here. My first daughter was born here. I have two sons who live and work in Johnson County. And I also have a couple of significant financial investments here as well … Beyond that, I’ve always tried to connect my district to Kansas City. So many of the commodities we grow, whether its wheat, soybeans or beef, end up in the second largest train depot in the country, here in Kansas City … so so many of our commodities go through Kansas City, through Johnson County.

Post: Explain your vote against a House bill that would have given $25 billion in additional funding to the U.S. Postal Service, a bill authored by Democrats. This bill also would have barred the USPS from making any more operational changes from now to the end of the year. This, after you wrote an op-ed recently in The Kansas City star calling the USPS a “lifeline … a vital federal service that we must protect, preserve and defend.”

[2:15] Marshall: I’m one of the biggest supporters of the U.S. Postal Service in Congress. I was one of nine [Republican] co-authors of the Postal Preservation Act earlier this year. So, unfortunately Speaker [Nancy] Pelosi chose this issue to politicize it and to throw knives at President Trump. The post office is in good shape. It has $14 billion cash-on-hand, it is fully funded for another year and we’ve already given them another $10 billion if they would need it. They’re in fine shape financially, but at the same time they need to make improvements. They’ve been losing $3-4 billion a year for the past decade, and I’ve been trying to make them become more efficient, help them get into the 21st Century. (Context: The USPS still regularly makes money each year on mail delivery, but its negative balance sheet is driven in large part by a Congressional rule requiring the Postal Service to pre-fund retirees’ benefits. The USPS has advocated for Congress to change this requirement.)

Post: What do you think is the appropriate course of action in terms of federal public policy right now when it comes to trying to control the COVID-19 pandemic?

[3:22] Marshall: I’m here to bring a message of hope. We’re doing a great job, this country is managing it so well right now. I spent several hours on the phone with Vice President [Mike] Pence recently. We have three vaccines in Phase 3 [trials] and we think we’ll have vaccines for the most vulnerable folks come this Thanksgiving, as long as we get FDA approval. They’ll be out there for the most vulnerable… We’re getting rapid point-of-care testing out to all nursing homes across the country … On the treatment side we’re also making incredible progress. This spring, about 4% of the people getting sick from this virus were dying. Now, it’s about 0.4%. (Context: This was an estimate released by the Centers for Disease Control and Prevention in July, but accurate mortality rates from COVID-19 have been hard to track.) … We need to take care of the most vulnerable, but on the other end of the spectrum we need to protect our children and young adults. If you’re under 25, the common flu has more side effects than the COVID virus does. … So, I think local school districts should decide when kids go back to school …

Post: So you support local school districts deciding for themselves how fully they should reopen?

[5:35] Marshall: Absolutely. I don’t think anyone knows more, cares more about their children than the parent of those children, the local school boards and the superintendents.

Post: Even if, say a school district decides to open all students in remote learning, like our Shawnee Mission School District? That’s up to our local school board?

[6:00] Marshall: Absolutely. I may not agree with them, but I haven’t taken a deep enough dive into their particular metrics, then if that’s what they decided then the parents can live with that. But they certainly don’t think someone from Topeka, or Washington, D.C., or the CDC should decide that.

Post: What’s your personal policy for when you wear a mask in public and when you don’t? Your social media feeds and various news reports show you sometimes wearing a mask, sometimes not.

[6:37] Marshall: So, when I’m in a public place, then I do my best to have a mask on. If we’re able to sit down and be six feet apart, then I’m able to take my mask off. But I would tell you this: the people that I meet want to look me in the eye, they want to shake my hands … they want to see the expression in my face, they want to know what’s in my heart. When you’re voting for U.S. Senator, you want someone who is out there leading, not someone who is sitting in their basement, leading from behind and criticizing. Folks, when they meet me, want to know what I look like and what I’m all about.

Post: Public health officials, though, recommend that the more universal mask-wearing is, the quicker this virus comes under control. Should public officials be out there modeling mask-wearing for others?

[7:53] Marshall: So, I do my very best to wear my mask when I can … I think a little Kansas common sense goes a long way. But what some people don’t realize is that in rural America, the incidence is so very, very low, additionally I’m getting tested very regularly, but I’m trying to do the extra hand-washing. But it’s tough to be out there on the campaign trail and people are so frustrated if I have a mask on … and just verbally, the expression on their faces, they want to see who I am. So, I’m doing the best I can.

Post: Are you and your family still taking hydroxychloroquine? You have said that you were taking it preventively…

[8:42] Marshall: Yes, I sure am. I think the hydroxychloroquine is, number one, very safe … I think there are a lot of studies out there that show, used prophylactically, it can help. What the national media has done is to weaponize it, as well. But this should be a decision between you and your doctor. That nobody at the CDC knows about my health or the health of my parents. The benefits far outweigh the risks for most people to take this. I think it’s an alternative that Americans should discuss with their own doctors.

Post: The CDC has said hydroxycholorquine is unlikely to help with COVID-19 and the FDA has reversed its emergency-use authorization …

[9:38] Marshall: I would challenge that. I think there are lots of studies that show it is helpful and that it’s safe, and that the benefits outweigh the risks. As a doctor, I did this: sat down and saw different studies, different data points. If I’m sitting down with someone with metastatic ovarian cancer, and I’m discussing with her the treatment options. The only person that matters is that patient. You take all these data points and try to figure out what is best for that one particular patient. I’m very disappointed in the CDC. I think they’ve been politicized and that’s why we’re moving more and more of the responsibilities over to HHS [the Department of Health and Human Services.]

Post: The Republican Party this year took the unusual step of not revising its party platform during its national convention, but instead it endorsed President Trump’s agenda in a one-page resolution. For the voters of Johnson County… what will they know that you stand for and what the GOP stands for?

[11:08] Marshall: I think number one is the health of your family, making sure you and your family get safely through this virus. That’s why we’re breaking doors down at warp speed to get a new vaccine and therapeutics. Number two is a strong economy. Do you want the government to control the economy? The Democrats have promised to raise your taxes. They want to control your health care. They want to control where your kids go to school. They want to control your life. But I believe in lower taxes, more freedoms, less regulation … So, I’m going to support a free, capitalistic economy that gives consumers more choices. Next, is education and infrastructure. I’m a fifth-generation farm kid, first-generation college student whose American dream was to become a doctor. And I got to live the dream … I understand how important education is to Kansans. And lastly, I’m going to stand for law-and-order. Of all the things people are concerned about right now, it’s the safety of their family. My dad was chief of police in El Dorado for 25 years … On of his favorite sayings was, “Two wrongs don’t make a right.” Retaliation is always wrong. Though every American has the right to peacefully protest, nobody has the right to riot, to steal, to tear down, to loot, to harm another person’s property. My opponent [Barbara Bollier] has never condemned the riots. This November, this country is at a crossroads. Do you want a liberal government, a socialist government of Joe Biden, Bernie Sanders and ‘The Squad’ or do we want local schools, local government, where people can decide what doctor to take their families, too. Should schools be open because of COVID? Those should be local decisions and a free economy.