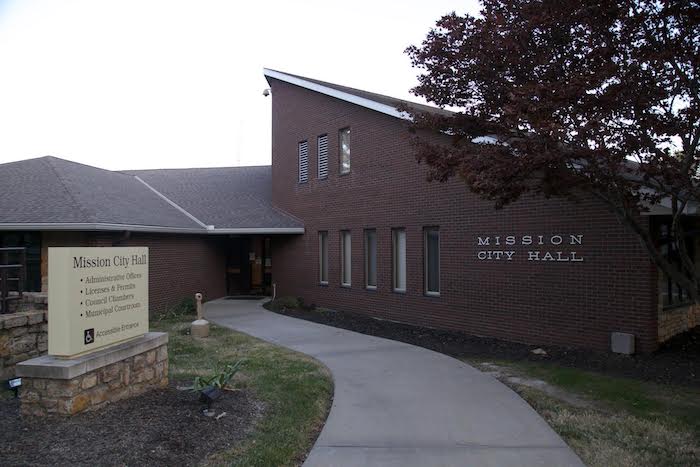 The Mission City Council has approved a new city logo. The design incorporates four M’s to represent the city’s wards, and the M’s intersect to show the crossroads of community as well as the crossroads of Johnson County. File photo.

The Mission City Council Wednesday evening approved a rebranding design that the city will use in its signage and website as part of an ongoing communications plan.

Mission city staff worked with marketing agency Crux KC to narrow down the dozen or so options to two to present to the city council and the public.

The city council Wednesday was asked to choose between the two options. The public’s feedback on the two designs was nearly split, with 105 preferring option one and 107 voting for option two.

Option one, which all but Councilmembers Ken Davis and Schlossmacher informally voted for, uses four M’s to represent the city’s wards. The M’s intersect to show the crossroads of community as well as the crossroads of Johnson County.

Councilmember Debbie Kring said she received resident feedback via phone and electronically, some of which expressed concerns for the lack of a sunflower and the readability of the cursive font. Emily Randel, assistant to the city administrator, said the cursive was slightly reworked for legibility.

“I feel like no logo update process is easy and no change is easy either,” Randel said. “But I think, especially when I started hearing staff’s feedback rolling in and started talking about where we would apply it and what we would use it with, I get energized every time we talk about it and I believe in it.”

Councilmember Nick Schlossmacher said he was not a big fan of either design and said he would have liked to see other options. He said incorporating the traditional sunflower could have made it more Mission-specific.

“I honestly think you could take ‘Mission’ and replace it with any other city around here and it would work just the same,” Schlossmacher said. “It’s a nice modern design, but it just seems kind of generic to me.”

Councilmember Hillary Thomas-Parker said she agreed with some of Schlossmacher’s sentiments, but she was comfortable moving forward with one of the two options if it were the majority’s wishes. Others like Councilmember Trent Boultinghouse said both designs “get [Mission] to a good place,” though he favored the thought behind option one.

The city council approved the option one design with a vote of 6-2. Councilmembers Arcie Rothrock and Schlossmacher voted in opposition.