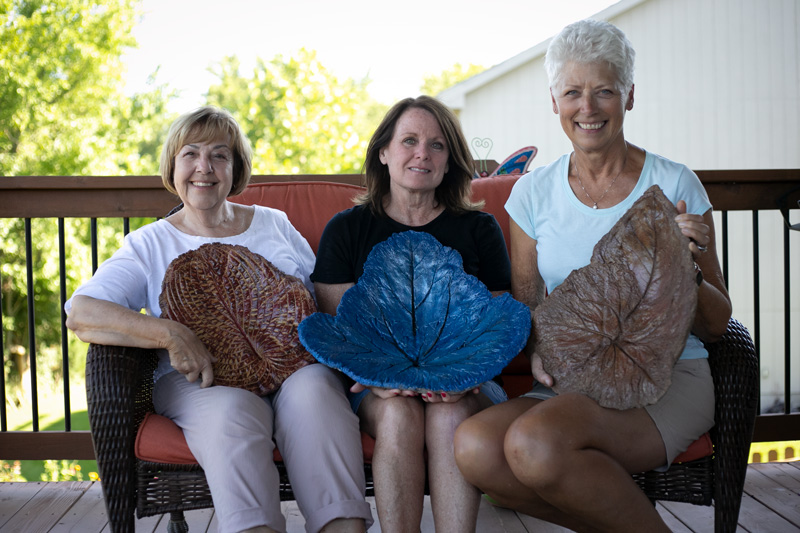 Three neighbors in Shawnee have become close friends while working on some yard art projects, particularly in crafting their own bird baths. Above, from left, Betty Theel, Brigid Knipp and Peggy Beerbohm hold up some of their favorite products.

Three next-door neighbors in Shawnee have grown closer together during the COVID-19 stay-at-home orders by crafting and selling homemade bird baths.

Brigid Knipp, Peggy Beerbohm and Betty Theel were already well-acquainted before the pandemic, but when state and county authorities shut nearly everything down and told residents to shelter in place this spring, they found themselves looking for things to do.

Then Knipp settled on a new idea, right around Memorial Day weekend. She took inspiration from her brother, a horticulturist in Iowa who crafts his own bird baths. She pitched the idea to Beerbohm that they could make their own.

But they tried it out anyway.

“When we got done, we thought, oh my gosh, Betty is going to want one — because Betty was out of town at the time,” Knipp said.

A few of their neighbors stopped by and took interest in their work. Theel took to the idea as well, and together, the three of them set to work.

“It all started because we were all lost souls,” Beerbohm said. “We were walking as three couples, just trying to do a little socializing, anything to get out of the house — we did that at least once a day, sometimes twice a day. And we got to meet so many neighbors.”

The women have made bird baths, stepping stones and other yard art. Their bird baths are designed by imprinting leaves from rhubarb, hosta, elephant ear, sunflower and cabbage. They shape the leaves around sand and put wet cement on top. Once it dries, they peel off the leaves and paint the bird baths with acrylic paint and seal them with polyurethane, which is safe for birds and animals to enjoy.

“Every one we did was a new experiment,” Beerbohm added. “It’s been a learning curve. You look at this and are like, oh my gosh, we made this.”

Since then, the women have crafted nearly 40 bird baths, and sold or given away many of them. They’ve dubbed their business The Painted Bird.

Beerbohm is also thinking about ways to donate or volunteer with their crafting. Knipp said she’s already experimenting on new craft projects for this winter.

“I love my neighbors, love them to death,” Knipp said. “When we get together, it just makes my whole day.

“If everybody could find something to do to keep them busy,” she added. “I can’t sit and watch the news, it’s too depressing.”

Their products can be found on Facebook Marketplace and on the Nextdoor app. Some of their bird baths are also at Happy Valley Farm in De Soto.

The Painted Bird has made an appearance at the Shawnee Farmers Market and will soon debut at First Weekends in September in the West Bottoms in Kansas City, Missouri.

They can be reached at thepaintedbirdkc@gmail.com.