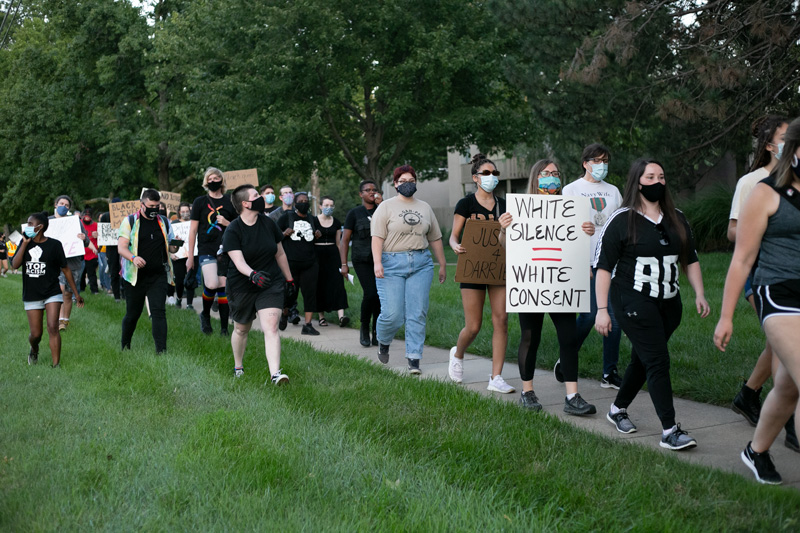 Nearly a month after a Black Lives Matter protest during which Overland Park Police arrested four people, at least 70 protesters rallied in support of one of those arrested, calling for the charge of battery against a law enforcement officer to be dropped.

Protesters gathered Friday evening on the lawn of the Indian Creek Recreation Center and later marched down 103rd Street through the neighborhood where Overland Park Mayor Carl Gerlach lives.

The event was hosted by The Miller Dream LLC and White Rose, both local, community-based advocacy groups, and called the Justice For Darrien Rally & March. Darrien Richmond, along with three others, was arrested by Overland Park Police the night of July 24 during a march through a residential area near Johnson County Community College.

Overland Park Police reported one officer scraped his knee during an altercation with Richmond, a 26-year-old Shawnee resident.

Marisa Richmond, who was also arrested on July 24, attended the Friday rally and shared her appreciation for the community’s support for her husband.

“I’m just here to be heard and make sure that the community understands who Darrien is, because I think a lot of that’s been reduced to that night, and that night doesn’t reflect who a person is,” she said.

She said Darrien was running to her side because she was having a panic attack while in the process of being arrested.

“He’s a really good husband, somebody who’s really caring and puts others before himself. He’s very much a protector,” Richmond said, adding she’s frustrated because she thinks the July 24 protest has become a misunderstanding between demonstrators and local residents from that night.

“A lot of people are talking like, ‘Oh, I was in my house and I was scared for my life because I heard people chanting,’” she said. “I don’t think you know what fearing for your life feels like. That’s white fragility.

“Obviously, everyone who’s out here for Black Lives Matter knows that everyone’s lives matter. It’s the people that shout All Lives Matter that don’t seem to understand that all lives need to matter and that they don’t right now.”

While the impetus for this particular rally stemmed from the events of July 24, protesters chanted and rallied around several other community issues. In addition to calls for Johnson County District Attorney Steve Howe to drop the charge against Darrien Richmond, the protesters also demanded:

“That night of the 24th, man just watching it, it boiled up so much in me, not of hate — none of that — but just an injustice, seeing how the police do things,” said John Doran Jr., a Lenexa resident, at Friday’s rally. “When is this stuff going to change? I’m tired of being a Black man keep getting oppressed for not doing anything. When I see a brother that is (not doing anything) and has worked their whole life to strive and do better, it’s not right to put no felony charge on him.”

Stacy Shaw, a Kansas City, Mo., lawyer who has been active at local demonstrations and was also arrested on July 24, led most of the chants and march on Friday.

“We are the future that America has been praying for, we are the change that America has been waiting for, we are the promise that our ancestors died for,” Shaw said. “Our names, our stories, they will be remembered when people look back and say, ‘What happened in 2020?’ When a group of people stood up when it was not popular, when it was dangerous, when people called them radical, when people called them terrorists, our stories will be in history.”

The rally and march concluded an eventful week in Overland Park. The American Civil Liberties Union of Kansas recently sent a letter to Overland Park Police, asking the department to address their concerns with officers’ actions during the July 24 protest.

Several residents calling for police transparency interrupted city council proceedings Monday evening, particularly to address the city’s controversial $70,000 severance arrangement given to an officer who fatally shot John Albers, a teen backing out of his driveway, in January 2018.

Just hours before Friday evening’s march and rally, Mayor Carl Gerlach held a press conference in which he defended that severance arrangement.

On Friday night, protesters marched back and forth in front of the mayor’s house, calling for him to identify the police officers at the July 24 protest.

“Mayor Gerlach, come outside,” they chanted. “We want police ID.”

Throughout the evening, Shaw advised her fellow protesters to stay safe and vigilant while out on the streets and to not resist arrest by police.

Before the march, Capt. Mark Fitzgerald distributed pamphlets to the protesters that informed them of their rights to peacefully gather and protest, as well as various city ordinances related to disorderly conduct, riots, resisting arrest and trespassing.

A drone flew overhead the majority of the evening and followed the protesters as they rallied and marched. Protest organizers said they didn’t know whose drone it was.

When Fitzgerald drove behind the protesters heading into a neighborhood from 103rd Street, a couple of protesters shouted for everyone to walk in the street. But Shaw immediately called for the protesters to get back on the sidewalk, and everyone quickly followed her request.

(In addition to Darrien Richmond, Overland Park Police on July 24  arrested three other protesters, including Shaw, for failing to walk on the sidewalk when a sidewalk was available.)

Fitzgerald, the police captain, said he wanted to make sure protesters were being safe and there was no trouble with neighbors. He added that “it’s perfectly legal for them to protest.”

As dusk crept up, Fitzgerald told the protesters gathered in front of Mayor Gerlach’s house that they had to leave, as they were “very close to violating a residential picketing ordinance,” which is a form of protest that targets a specific home. Shaw escorted half of the protesters back to their vehicles and later returned to the neighborhood.

Some neighbors stood outside and watched the protesters as they filed down the sidewalk and along the edge of the street. Residents at one home appeared upset as marchers passed but did not want to speak to the Shawnee Mission Post about their concerns.

Other neighbors waved at the protesters and shouted their support, including one family who had invited the remaining half of the protesters to gather on their property.

“I think that people always have the right to protest and assemble in a peaceful way, and absolutely I believe in Black Lives Matter,” said Amity Dannefer, the homeowner who offered her front lawn for the protesters to gather. “If there’s something in which there’s police brutality against a person of color, absolutely we should demand answers.” 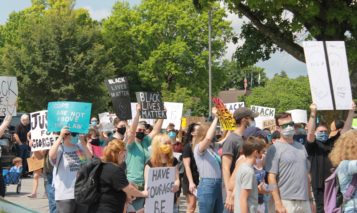