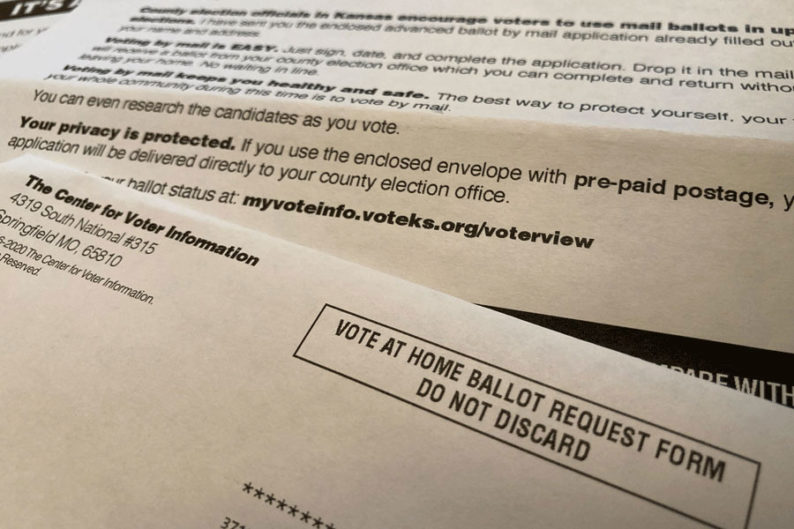 The Johnson County Election Office says mailers that many voters are receiving asking them to send in a pre-printed form to apply for mail-in ballots for November’s general election are legitimate but also have the potential for confusion amid unprecedented interest in voting by mail this election cycle.

The mailers come in a spare white envelope addressed to individual voters. On the envelope’s front is a printed box in all-caps: “VOTE AT HOME BALLOT REQUEST FORM DO NOT DISCARD.” The return label says the mailing is from The Center for Voter Information, a nonprofit that, according to its website, is a “non-partisan and non-profit organization that works to provide even-handed and unbiased information about candidates and their positions on issues.”

The Center’s website also says it provides voters with “tools and resources to register and vote in upcoming elections,” including forms to make it easier to apply to vote by mail.

“This is a legitimate organization trying to get people to register and apply to vote,” said Nathan Carter with the Johnson County Election Office. “This is not uncommon. Every year organizations and non-profits will send out these calls to try to get people to vote. It’s just creating more confusion this year because there is so much more interest than usual in voting by mail.”

Carter said the Johnson County Election Office was fielding “quite a few” calls from voters who had received the mailers from the Center for Voter Information. This November’s election is expected to see an unprecedented number of ballots locally and nationwide cast by mail because of the coronavirus pandemic.

The Johnson County Election Office tweeted earlier Thursday that voters who have not already applied for a mail-in ballot this November can use the Center for Voter Information form but should ensure the pre-printed information on the form is correct.

If Johnson County voters have already applied for main-in ballots for the general election, then they do not need to mail in the Center’s form.

Carter said as of Thursday, more than 100,000 Johnson County voters had already applied for mail-in ballots for November. That’s after roughly 80,000 voters cast ballots by mail during the Aug. 4 primary, which set an overall primary turnout record for the county with nearly 150,000 votes cast.

“A lot of people are getting this [Center for Voter Information] form and probably thinking, ‘Hmm, I thought I already applied for my mail-in ballot.’ That’s okay, you don’t need to apply again,” Carter said.

The Center for Voter Information lists itself as a 501(c)(4), a type of tax-exempt nonprofit that is not required to disclose its donors.

“We have included a pre-addressed, postage-paid envelope so you can send your voter registration form directly to your state or local election office. Election officials are the only people who will see the information entered onto the forms the Center for Voter Information sends out.”

Johnson County voters can request advanced mail-in ballots up until Tuesday, Oct. 27, a week before Election Day. Carter encouraged voters to not wait until then, though, and apply well before Oct. 14, when the county election office will begin mailing out ballots.

Mail-in ballots must be postmarked by 7 p.m. on Election Night, Nov. 3 and received by the Johnson County Election Office by Friday, Nov. 6.