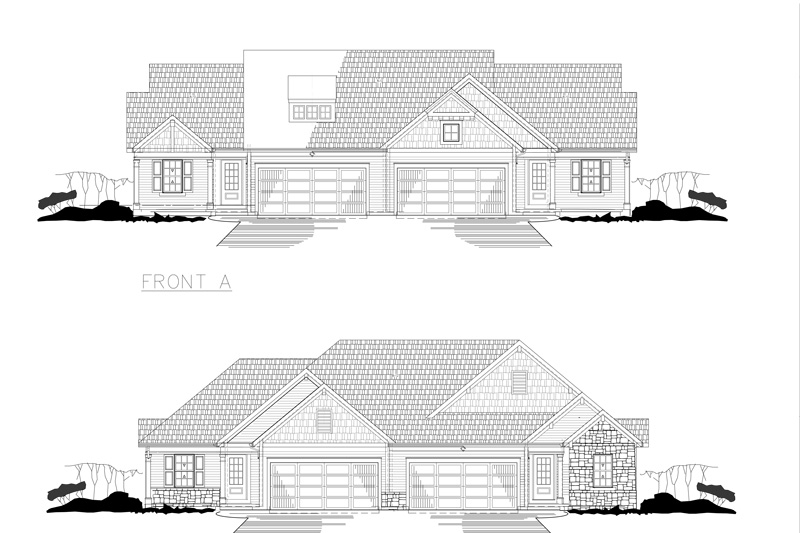 Located on 43 acres at the southwest corner of Prairie Star Parkway and Clare Road, the residential duplex project includes 81 lots for two-family villas, allowing a total of 162 units. Above is a rendering of the project.

The Lenexa City Council on Tuesday voted 7-0 to approve a rezoning and preliminary plan for the Mize Hill, a new duplex subdivision.

Located on 43 acres at the southwest corner of Prairie Star Parkway and Clare Road, the residential duplex project includes 81 lots for two-family villas, allowing a total of 162 units. The project is led by local developer Jim Lambie.

The preliminary plans require a rezoning from commercial to planned residential. About four acres of the site will remain commercial for future retail/restaurant uses.

Magi Tilton, planning and development administrator for Lenexa, said one neighboring resident raised concerns with the duplex project in a July planning commission meeting. The resident preferred a single-family development.

Lambie said maintenance will be provided for the subdivision.

Councilmembers Joe Karlin and Courtney Eiterich said they wanted to ensure the home elevations would offer varying heights and rooftop lines, to ensure the development is not “cookie cutter” and doesn’t look the same.

The site was previously approved for the Friends of Lenexa Sports Complex. That project, which would have provided sports facilities for the neighboring St. James Academy, had received some opposition from neighboring residents when the city OKed it last year.

Tom Feiden, chair of the Friends of Lenexa Sports Foundation, said the sports complex project fell through about four to six months ago for a few reasons: The neighbors had raised opposition, and the project costs “made it a high mountain to have to climb,” totaling $34 million.

“The neighbors didn’t want it, and we wanted to be sensitive of what they wanted,” Feiden added.

Andy Tylicki, president of St. James Academy, said the school is “always looking for opportunities to do something closer to campus.” He said he was surprised to learn about the plans for a duplex subdivision.

“This complex was going to be unbelievable,” Tylicki said of their plans for sports facilities. “It didn’t work, that’s OK.”

The academy has no plans in the works to create or enhance existing sports facilities at this time. Feiden said they had approached Lenexa with a proposal to redesign the Freedom Fields at 83rd and Monticello, but the city declined to pursue that project.

“I don’t know what the timing of any of those are going to be; it’s not anytime soon, probably after my time here at St. James, if I had to guess,” Tylicki added, citing the concept to build or enhance sports facilities for the academy. “It just really depends on the climate of education over the next 10 years.”

Councilmember Tom Nolte, who was present earlier in the meeting, was absent for this item.