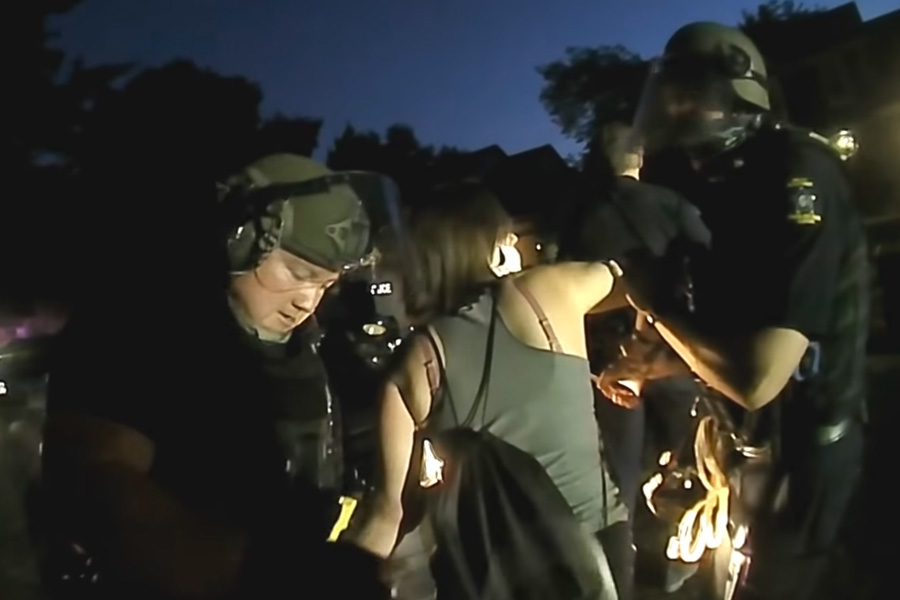 Overland Park police placed hand restraints on a woman during a July 24 protest after they say she refused their requests to move out of the street to the sidewalk. Video still credit Overland Park Police Department.

The American Civil Liberties Union of Kansas is seeking answers and public records related to the Overland Park Police Department’s response to a protest march that ended in the arrest of four demonstrators in a residential neighborhood July 24. The group says it is concerned about police’s “excessive, militarized response to a peaceful protest” that included the use of tactical gear, selective enforcement of protest restrictions and the absence of name identification on badges.

The ACLU of Kansas has asked department officials to sit down with them and the social justice group that organized the protest, The Miller Dream LLC, to discuss what happened and how some of the issues they’ve identified might be prevented from happening again, said Lauren Bonds, legal director of the ACLU of Kansas.

“There’s still a big question mark about how we got to the point where this was the response to a peaceful protest,” Bonds said. “At past protests, no one got arrested. They were actually being escorted. Go from that to arresting people moving in the street and showing up in riot gear. That’s a very different reaction.”

The arrests, the scuffle with police and confrontations with neighborhood residents have been the subject of continuing efforts by The Miller Dream LLC, a social justice group, to publicly question the police about their actions.

Members of the group attended a recent meeting of the city advisory committee that investigates racial profiling and to a city council meeting Monday, demanding a chance to publicly comment about police transparency.

In a letter to the city, the ACLU of Kansas said The Miller Dream LLC asked them to investigate what led up to the police response to the July 24 protest and what made it different from a protest on July 11, which covered essentially the same route.

Both marches, the letter says, were along residential streets in an area around Johnson County Community College. During the earlier march, police escorted protesters. Miller Dream founding member Patrick Wotruba said the only unpleasantness that time was when one person in the residential area came out and yelled at protesters. But the person couldn’t be heard over the chanting, he said.

But on July 24, the neighborhood and police were markedly less welcoming, Wotruba said.

“Nothing we felt was different from the first one,” he said, adding marchers spoke with a couple of officers beforehand, and told them they would be on the street when they got to the residential area. “They seemed to be fine with that. So when we got into the neighborhood we were kind of shocked by the response.”

The ACLU letter goes on to detail the chain of events from that night, based on their conversations with The Miller Dream organizers and other witnesses:

At about 8:50 p.m. two residents came out of their homes to yell at protesters and one, according to the ACLU, accosted a teenage girl. Although there were several officers across the street, none intervened until a few minutes later, when about 30 officers showed up in riot gear with zip ties in hand and began following the protest group, telling them to get off the street and onto the sidewalk.

The officers made four arrests, including of Kansas City, Mo., attorney Stacy Shaw, one of the lead organizers. According to the letter, officers did not have badge identification and seemed to target group leaders.

The letter also says someone from the department told Wotruba that the show of force was because the department had heard that two warring groups with guns would be present, and the riot gear was in response to angry complaints from residents after the July 11 protest.

All of that, Bonds said, leaves questions about whether the force is selectively enforcing restrictions on street protests and targeting group leaders. The use of riot gear was inappropriate, the letter states, and suspending the use of badge identification is inconsistent with the city’s policies on transparency.

Overland Park city officials did not respond directly to the letter and directed an inquiry from the Post to a July 27 statement on the city’s website about the protest. In it, the police department acknowledges the lack of badge identification, saying it was because of concerns that individual officers would have their information released online and face harassment.

It also admits that some officers appeared in tactical gear and that the department received information that counter protesters might attend. The city’s statement said most protesters were staying on the sidewalk, but a few did not get off the street when asked.

The department also posted body cam video on the site.

Bonds said the ACLU’s letter is meant to facilitate discussion between the city and protest group and avoid a lawsuit.

Wotruba with The Miller Dream LLC said his group just wants to know what made the difference between the two July marches, so protesters can know what to do the next time. They have a march planned for Friday starting at the Indian Creek Recreation Center – a different route than before.

The Miller Dream takes its name from Wotruba’s grandfather, the late Rev. Dan Douglas “D.D.” Miller, who was a former president of the Wichita NAACP and founder of an advocacy group there, Wotruba said.