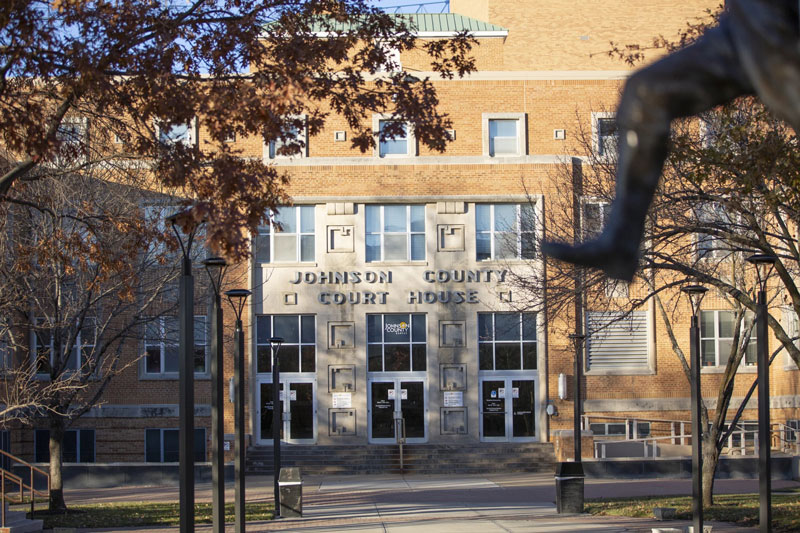 The county has held more than 25,000 virtual court hearings on the video conference software Blue Jeans since its courthouse closed its doors in March.

Sometimes people need reminders, Ryan said, that a video call is just as serious as attending court in person.

“You gotta laugh at some of it,” he said. “We have to be the enforcers and say… ‘This is the way we’re handling court right now.’”

When COVID-19 mostly shut down the Kansas judicial system in March, county courts had to move most hearings online and buy more computers, headsets and WiFi hotspots so that employees could work from home.

As the state and courts have reopened, the system has had to determine the safest way to conduct trials and select juries. A system that often relies on fax machines, phone calls and in-person communication may be changed for good.

“State courts have achieved 10 years of technological advancement in the span of about 10 weeks,” said Bill Raftery, an analyst at the National Center for State Courts “The alternative was for courts to do nothing.”

In Johnson County, one result has been almost everyone showing up — online, anyway — for their court dates, and making it on time. Sure, sometimes they fall asleep, forget to mute their microphones or call from bed, Ryan said. The court has seen fewer criminal cases during the pandemic but more family court cases.

“We’re doing as much as we can within the limitations we have,” Ryan said. “As long as people are willing to participate that way, we can accommodate just about everything except the jury trials.”

Because of social distancing, the court still hasn’t resumed in-person jury trials, and like many courts across the country, won’t conduct them virtually due to a legal tradition based on in-person interactions. Many defendants and lawyers also would prefer in-person trials, Ryan said.

“There’s not really a way to substitute that in-person experience,” he said. “It’s heightened scrutiny for a criminal case because of the fact that the person’s life and liberty are at risk.”

The county put 92 criminal trials on hold in March, and 23 of those people awaiting trial are in the Johnson County Jail, Ryan said. And even when those trials resume, it will be harder to find people willing to serve on a jury.

The economic strife of the pandemic has amplified the typical reasons for being unable to serve on a jury, like having to work or take care of a child. But it’s also created new reasons, like being medically vulnerable or showing COVID symptoms, he said.

“That’s the biggest hurdle for us,” Ryan said. “And we won’t know until we try.”

Another complication: trial lengths. Every part of a trial is expected to take longer because people will need more frequent breaks if they are wearing masks. Jury selection could take three or four times as long because social distancing restricts the number of potential jurors that lawyers can see at the same time, said Chief Judge Nick St. Peter of Cowley County in south-central Kansas. The court is also planning to clean surfaces in the courtroom between uses and clean restrooms more often.

It would cost the county of 35,000 people about $30,000 to put up plexiglass barriers between each juror, St. Peter said. So the county has decided to only put a plexiglass barrier around the witness box so that witnesses don’t have to wear masks while they testify. The court has also ordered masks with a clear section over the mouth for potential jurors to wear during selection.

That will help judges and jurors gauge the credibility of witnesses and help attorneys judge the suitability of potential jurors.

“When they have a mask covering everything but their eyes,” he said, “you don’t get the same facial expressions.”

Some rural Kansas courts are struggling to find the bandwidth to support all their operations, but St. Peter said the Cowley County Court hasn’t had many issues with internet speeds during video hearings. If community members don’t have a reliable internet connection, they have the option of attending a court hearing on the phone.

And unlike Johnson County, the Cowley County Court is open to in-person hearings and appointments — as long as visitors wear masks and have their temperatures taken.

When it comes to pandemic responses, there’s likely much variation between state courts in different parts of the country and even within the same state, said Erica Rickard, director of the Civil Legal System Modernization Project at the nonprofit Pew Charitable Trusts.

“A majority of state court systems are set up in a decentralized … structure,” Rickard said. “What happens in one county, might not be happening in the county next door.”

But overall, courts have been forced to modernize in a way that they never have before, said Raftery of the National Center for State Courts. Moving the majority of court interactions online has made it drastically easier for everyday people to navigate the system.

“This person doesn’t have to take a day off from work and lose their revenue for a day,” Raftery said. “You’ve just saved that person time and money.”

Attorneys no longer have to drive to hearings, so they won’t end up billing clients for travel time. And resolving legal disputes online is much more common.

Most importantly, Raftery said, the demands of adjusting to the pandemic have startled courts out of an “inertia” that can stifle government institutions. The pandemic has convinced judges, court staff and attorneys of the importance of updated technology.

“They’re not going to go back,” he said. “Technology is here to stay.”