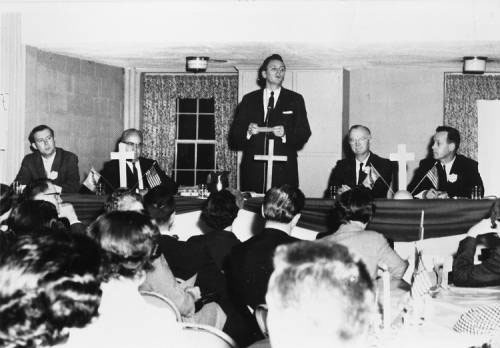 This is Part 2 of a three-part series examining Johnson County’s history of racist housing policies and the impact those policies still have on our community today. You can read Part 1 here, and look for Part 3 Thursday.

In 1965, Rev. Robert Meneilly of Village Presbyterian Church took to his pulpit and made a plea to his congregation: It was time for Prairie Village to openly accept Black families.

“How can we who live here dare say we love the Negro…when we would go into a panic if we heard a Negro family might be able to consider a house on our street?” Meneilly asked. “If we allow Negroes to move into our community naturally and freely when they are able and have the desire, we will have a better community.”

Shortly after that, Donald Sewing and his family began attending church at Village Presbyterian.

The Sewings were the first Black residents of Fairway. Donald used his job as a realtor to help advance the cause of racial integration in the area, trying to place Black families in northeast Johnson County. As he described in an 2007 interview with the Johnson County Museum, Sewing utilized a “scattered approach” to place his clients — putting just one family in each neighborhood in an attempt to prevent blockbusting and white flight.

According to Andrew R. Gustafson, curator of interpretation at the Johnson County Museum, Sewings’s efforts broke the ice for other realtors in Johnson County to start working with people of color, and allowed more white homeowners to “get used to living next to somebody who didn’t look like them.”

But Meneilly’s advocacy and Sewing’s work were met with push back, some of it violent. Sewing’s real estate office in Overland Park, which opened in 1970, was smoke bombed. Meneilly received hate mail and threats.

And more than a half century later, Johnson County still remains overwhelmingly white.

Despite the political successes of the Civil Rights movement in the 1960s, several factors — many of them stemming from residential discrimination — continued to hold communities of color back during the years that Meneilly and Sewings were most active.

As Gustafson explained, homeowners, then as now, are able to “create generational wealth that…can help fund other home purchases, education, purchases of appliances and cars so they can drive to better jobs.”

By contrast, he said, Black families shut out of purchasing homes in Johnson County, where housing prices have been mostly stable for decades, have experienced a “spiral downward,” deprived of the opportunity to improve their economic circumstances.

Unable to afford safe living conditions and medical care, many people of color around the Kansas City metro and across the nation suffered more health problems than their white counterparts.

“Adverse birth outcomes, increased exposure to air pollutants, decreased life expectancy, increased risk of chronic disease and increased rates of homicide and other crime” have been historical realities for African Americans in Johnson County, according to United Community Services (UCS) of Johnson County.

The ongoing COVID-19 crisis has exacerbated these racial disparities and put them into starker relief. According to the Johnson County Department of Health and Environment, people of color in Johnson County are up to four times more likely to be infected by the disease.

Brian Brown, an experienced community leader, healthcare professional, and now the Diversity and Inclusion Chairman for the Kansas PTA, explained that the disproportionate impact of COVID-19 can be explained by the lasting legacy of inequality in America’s healthcare system.

In a UCS Race, Equity, and Inclusion Committee meeting late last month, he discussed how the doctrine of “separate but equal” (the infamous legal doctrine justifying Jim Crow-era segregation struck down by the U.S. Supreme Court in 1954’s Brown v. Board of Education decision) as applied to healthcare has engendered an enduring distrust in communities of color for systems that were not built for them and that have not represented them well.

Pair this with the conspicuous correlation between jobs deemed “essential” during the pandemic and occupations disproportionately held by people of color, and these case rates are hardly surprising.

‘The perception of not being welcomed’

Consistently denied access to quality healthcare, education, and basic public services like water and sewage, many Black neighborhoods across the U.S. suffered slum-like conditions. As historian Richard Rothstein explains in his mini-documentary “Segregated by Design” based on his book, The Color of Law: A Forgotten History of How our Government Segregated America, residential segregation not only impacted Blacks’ material living conditions but also whites’ perceptions.

“White homeowners looked at these places and assumed the slum conditions were characteristics of African-Americans and not of government policy that forced this kind of overcrowding,” Rothstein writes. These perceptions reinforced stereotypes of Black people as dirty, dangerous, and uneducated, which was used as justification to further exclude people of color from wealthy white communities — when, in fact, “such exploitation was only possible because public policy denied African Americans opportunities to participate in the city’s white housing market.”

As historian and University of Kansas professor John Rury explains, “the perception of African Americans that Johnson County was not a hospitable environment for them” influenced patterns of settlement and migration in the area throughout its history and into the present. “The area’s comparatively high cost of living and its lack of proximity to Black settlements on either side of the border,” Rury adds, “certainly did not help.”

In turn, Andrew R. Gustafon with the Johnson County Museum says, homeowners associations (HOAs) like the kinds in Johnson County popularized by developer J.C. Nichols a century ago, used racially discriminatory language in housing covenants to promote “the perception of not being welcomed,” using it “as an enforcing agent” to keep people of color from moving in ‒ even after official segregationist policies were made illegal.

“If somebody doesn’t feel welcome somewhere, why would [they] move there?” Gustafson says.

In part, because of these perceptions, and the exclusionary, segregationist policies that both engendered and promoted them, Johnson County has “remained overwhelmingly white throughout the long postwar era, without significant controversy over racial questions during the tumultuous 1960s and 70s,” according to Rury.

Even despite efforts by influential reformers like Rev. Robert Meneilly and Black realtor Donald Sewing, Johnson County continues to look much like the exclusive, all-white upper class haven that J.C. Nichols envisioned when he bought his first lots in what would become Mission Hills more than a century ago.

The conditions that have largely shielded Johnson County communities from difficult conversations about race ever since have persisted into the present day. But that may be changing.

In Part 3 of our series, we’ll hear from local organizers and community leaders about a potential path forward for Johnson County and changes, they say, are needed to finally reckon with the county’s racist history.