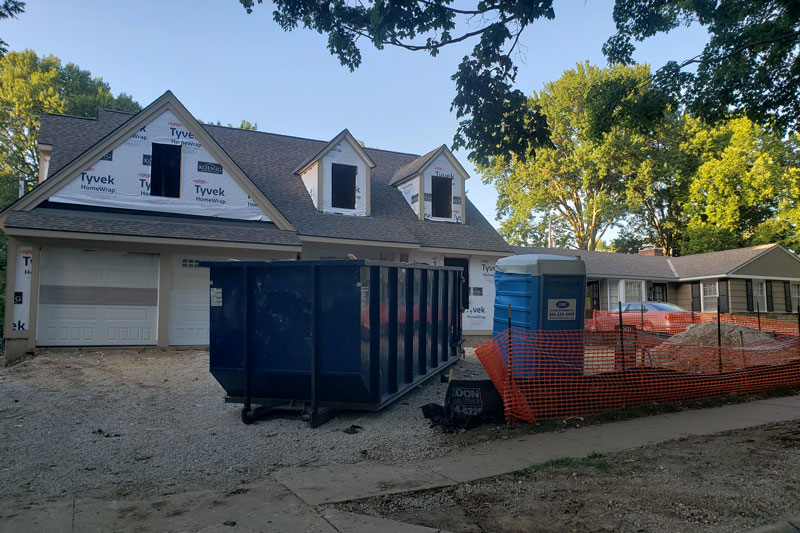 The preliminary restrictions being discussed would allow private construction from 8 a.m. to 8 p.m., with certain exceptions for periods of hot weather. The measure could return to the full council for consideration as early as Sept. 8.  Above, a new home under construction near 69th Street and Roe in Prairie Village.

The Prairie Village City Council’s Committee of the Whole voted 7 to 4 Monday to change proposed restrictions on when private property construction can occur, in an effort to address noise concerns.

The new restrictions under consideration would allow construction from 8 a.m. to 8 p.m. every day — including holidays. From May 15 to Sept. 15, construction could start at 7 a.m. weekdays to reduce risks to construction workers during hot weather. The earlier start time during the summer would not apply to holidays.

The measure could return to the full council for consideration as early as Sept. 8.

The council took up the issue two years ago amid a wave of teardown-rebuild projects throughout Prairie Village. The city’s current ordinance against disturbing the peace allows construction is as follows:

Ward 2 Councilmember Inga Selders said she wanted an ordinance that would prohibit construction on 10 holidays a year. Ward 1 Councilmember Jori Nelson agreed, “because our residents need a reprieve.” But Ward 4 Councilmember Piper Reimer said that “as a homeowner, those are the times we have to get those projects done.”

Ward 6 Councilmember Terrence Gallagher said most roofers will stay later to finish a roof or prevent rain damage and suggested considering a clause that would allow construction during daylight hours in such cases.

“I know if I was putting a roof on, I’d want them to get that finished in one day,” he said.

Riott listed several positive attributes trees provide a community, including their cooling effect, ability to increase property value, and to serve as a habitat for wildlife.

“We ought to be treating these trees like public assets,” he said.

Riott cited studies showing that mature trees are valued at more than $30,000 over their lifetimes but cost one-fourth that amount to maintain, and other studies show 10 times the return on value.

Construction projects can damage trees’ feeder roots, which extend 6 to 8 inches down into soil and laterally sometimes two to three times the canopy area, Riott said. These roots are younger and less durable than support roots, which anchor trees and provide structural support.

Feeder roots “provide critical water, oxygen and nutrients for the tree,” Riott said. “They live in that little air space in the soil.”

Soil compaction from heavy equipment, construction materials and debris up against or near trees deprive them of oxygen, water and nutrients. Resulting tree damage can occur up to three, five or even 10 years later.

“But what happens is the construction contractors come in here, they build the house, it looks great, they turn it over to the owner, the tree’s in perfectly good condition, they leave, get their money and they walk away and then a year, two years, three years later you see in the community these die-backs and these trees’ deaths,” Riott said.

Riott and Dunn asked the council to: