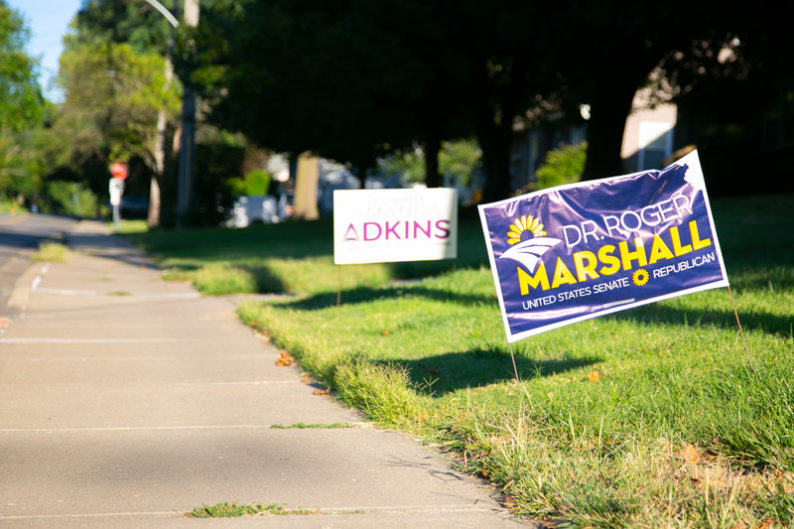 Roeland Parkers can now place an unlimited number of political signs in their yard after a city council approved ordinance amendment. The adjustment brings bring the code into state statute compliance.

The Roeland Park City Council Monday evening amended its city code to allow an unlimited number of political signs within unpaved right-of-ways. Signs are allowed to be placed 45 days prior to the election, the day of the election, and two days after the election, per state law.

Previously the city’s code only allowed up to three political signs per residential lot. But this restriction did not comply with 2015 state statute prohibiting municipalities from regulating political signs.

A previous Roeland Park city attorney had questioned the constitutionality of the statute but City Attorney Steve Maurer said the statute does not allow the city to limit political speech nor restrict First Amendment speech.

Maurer said the goal was to bring the code into state statute compliance without creating a larger problem for citizens, residents and candidates.

The state statute intends to allow residents to express their support for as many candidates or issues as desired, he said.

“Just look at the November election,” Maurer said. “There are far more candidates or issues up to be considered than just three.”

Councilmember Michael Rebne asked about the policy outside of the 48 days for political signs. Maurer said residents are allowed three temporary signs so long as they are not battered, worn or torn up and comply with the height limit.

Additionally, Maurer said he found residents are allowed to remove unwanted or unknowingly placed signs from right-of-ways in front of their property. While there is no law to address the removal of signs from in front of someone else’s property, Maurer said former Johnson County Commissioner John Toplikar was charged with theft for removing his opponents campaign signs in 2008.

The city council passed the city code amendment unanimously. The updated ordinance can be found in city documents here.