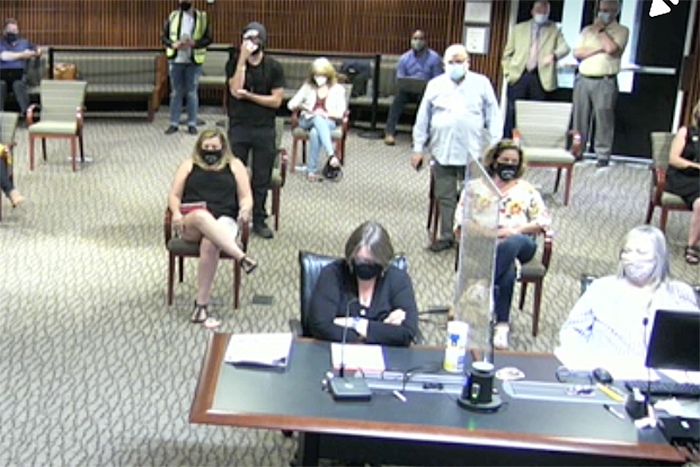 The Overland Park City Council’s first in-person meeting since the beginning of the coronavirus pandemic erupted into chaos Monday night as several people – outraged at the lack of a public comment period – shouted over the council’s scheduled discussion to demand police transparency.

Councilmembers had barely sat down after the Pledge of Allegiance before they were called out for controversies surrounding the fatal police shooting two years ago of teenager John Albers and the more recent arrests of four protestors in July. About 20 attendees said they came to the meeting expecting there would be a public comment period where they could express their concerns.

But Mayor Carl Gerlach informed them that no comment times would happen until the next council meeting, Sept. 14. That did not sit well with the attendees.

Things got started with a heated exchange between Overland Park resident Bob Hoffman and Mayor Carl Gerlach. “There’s no reason not to hold the public comments. The public is here,” Hoffman said.

“Excuse me sir, you can’t walk in and take over a council meeting,” Gerlach replied.

“We’re just trying to have a conversation about the murder of a young man here and the cover up. It’s a conversation with our elected officials that needs to take place because the people in your city want to know that they are protecting us and not just protecting officers and managers,” Hoffman said.

From there, other attendees began to stand up and call out questions and objections to the council. At one point, Gerlach asked police to remove some of the protesters but some protesters still refused to go and stood talking to the officers instead.

The council plowed ahead with its regular agenda, which included passage of the city budget, but little of it could be heard above the crosstalk.

Sheila Albers, who has campaigned for police transparency since the shooting of her son in January 2018, had hoped to have up to 30 people speaking about the $70,000 severance payment given to Clayton Jenison, the officer who killed John Albers by firing into the minivan he was backing out of the family’s driveway. The payment was made two years ago but only became public recently.

Albers and three friends came to the meeting Monday, but they did not speak and left early.

“It’s frustrating that the city is not doing public comment until Sept. 14,” she said. “It’s ridiculous because every other municipality in the Kansas City metro area manages to do this but Overland Park struggles. It gives the impression that they are hiding something and that they are unwilling to engage the public.”

Albers said she was not comfortable interrupting the council’s business meeting, though.

“I’m absolutely in support of peaceful protest, but I also don’t want to disrupt the business they’re trying to conduct. I was coming to just sit silently to make my presence felt. I’m moved that this group came in support of John,” she said.

Rachel Hudson, of Belton, also attended the meeting. “I’m primarily here for police department transparency,” she said. “I know Ms. Albers has been fighting for that for some time since her son unfortunately passed due to the neglect of a police officer. We need to stop things like this before they happen.”

Hudson also participated in the protest march a month ago in Overland Park organized by the Miller Dream, LLC, that ended with four arrests. She said she wants to know the names of the officers who made the arrests, so she can file complaints with the city. The protest on July 24 began along College Boulevard near Johnson County Community College and wound its way through a nearby neighborhood. Hudson said it began peacefully but protesters were harassed and thrown to the ground by police after they refused to obey officers’ commands to move from the street to the sidewalk.

“I just want them to know that some things you have to be steadfast on. I don’t want them to think that if they just ignore it, it will go away because it won’t go away until it’s solved,” she said.

The council on Monday did not discuss the fallout from that protest, but members did break into executive session to talk about the severance payment to Jenison, as Councilmember Faris Farassati had been requesting. However, councilmembers did not say anything more about it in open session.

Farassati and Councilmember Logan Heley spent some time afterward with the people who wanted to speak.

The council began working on a plan for public comments over a year ago and the comment periods were supposed to begin earlier this year. They were delayed when councilmembers went to remote meetings due to the COVID-19 pandemic. Although Monday was the first night back in council chambers since the pandemic started, comments won’t start until September so some technical issues can be smoothed out, said city spokesperson Sean Reilly.

There were comments at the council’s public safety committee meeting last week. That’s when several residents of a neighborhood near JCCC where protesters marched in July came to voice support for police.